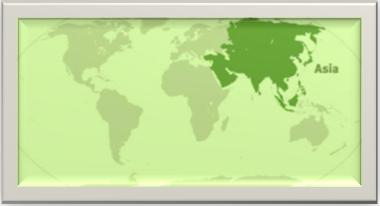 Two of my favorite novels are “The Good Earth”–which is set in China–, and “Memoirs of a Geisha”–which is set in Japan. So it’s a wonder that I’ve never been to Asia. However, I’m definitely going, and hopefully soon. 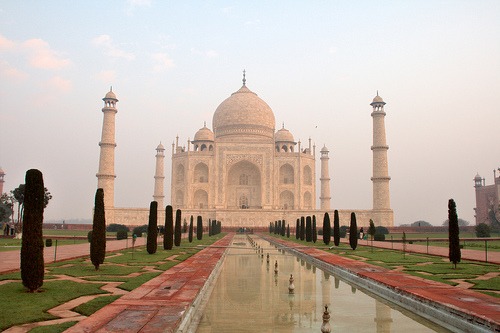 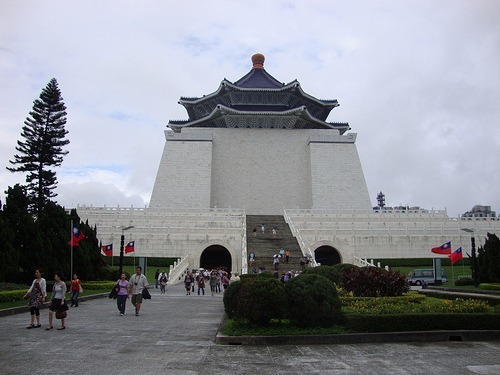 The structure is framed on the north and south by the National Theater and National Concert Hall. 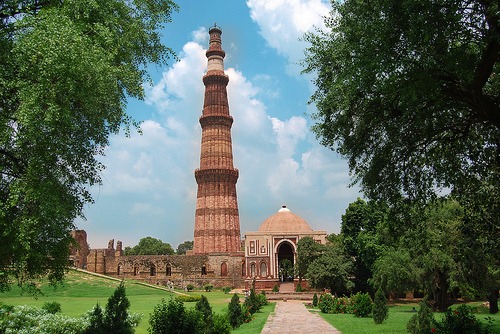 4. See the Qutub Minar, located in Delhi, India. It’s the tallest minaret in India. The Qutub Minar is made of red sandstone and marble and is covered with intricate carvings and verses from the Qur’an. The surrounding archaeological area contains funerary buildings, notably the Alai-Darwaza Gate, and two mosques. 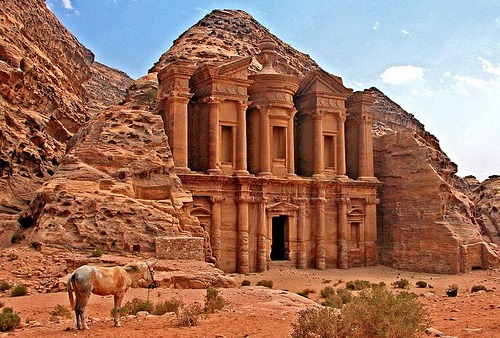 5. Visit Petra, a historical and archaeological city in Ma’an, Jordan, that’s famous for its rock-cut architecture which dates back to 312 BC. Petra was literally carved directly into vibrant red, white, pink, and sandstone cliff faces. It’s one of the world’s most famous archaeological sites, where ancient Eastern traditions blend with Hellenistic architecture. 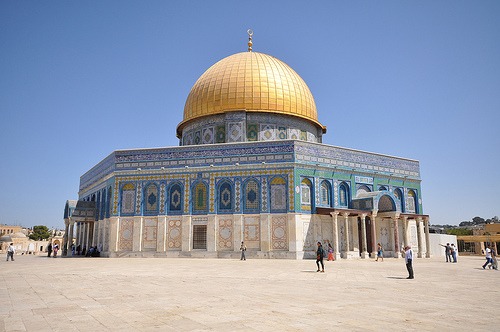 6. See the Dome of the Rock, a Muslim shrine located on the Temple Mount in the Old City of Jerusalem, Israel. It enshrines the rock from which Muḥammad is said to have ascended to heaven after his miraculous journey from Mecca to Jerusalem on the winged steed al-Buraq, and is a masterpiece of Islamic architecture. 7. See the Kuwait Towers, Kuwait City, Kuwait. The Kuwait Towers are a group of three slender towers in Kuwait City, standing on a promontory (land that juts out into a body of water) into the Persian Gulf. They were officially inaugurated on 26 February 1977. The towers have a viewing sphere 123m above sea level form which you can get great views of Kuwait City as well as the waters of the Arabian Gulf. 8. Visit the Great Wall of China located along China’s historical northern borders. The Great Wall begins in the east at Shanhaiguan in Hebei province and ends at Jiayuguan in Gansu province to the west. It was continuously built from the 3rd century BC to the 17th century AD, and is over 20,000 kilometers long. In addition, it has the world’s highest observation deck, and it’s the tallest free standing structure in the world.

10. Visit the fifty-foot high Azadi Tower (Freedom Tower) in Tehran, Iran. Built in 1971, the Azadi Tower is a combination of both Islamic and Sassanid architectural style, as well as of modern and ancient cultures. 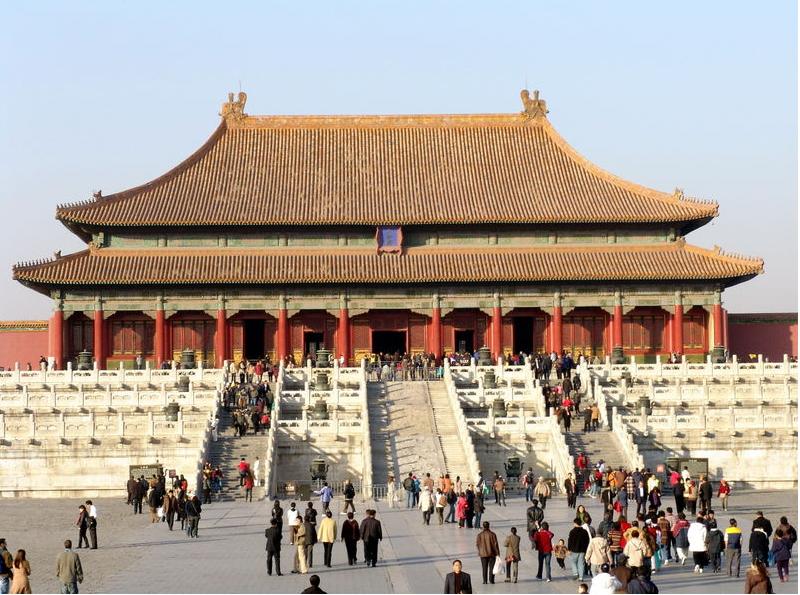 11. Visit the Forbidden City in Beijing, China. The Forbidden City was built between 1406 and 1420 during the Ming Dynasty as a vast complex of palaces and administrative buildings. It has been the imperial home of 24 emperors belonging to two dynasties: the Ming (1368-1644) and Qing (1644-1911) dynasties. It is now the Palace Museum. 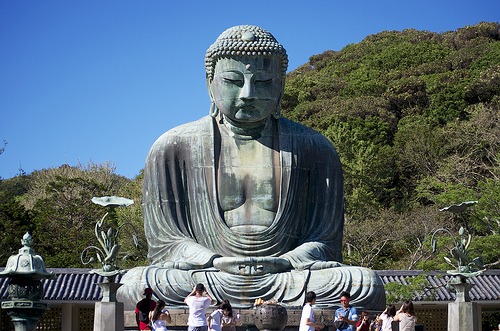 12. Visit the Great Buddha of Kamakura in Kamakura (just south of Tokyo), Japan. It’s a monumental outdoor bronze statue of Amida Buddha seated serenely in the grounds of Kotokuin, a Buddhist temple. The Great Buddha is 13.35 meters high. 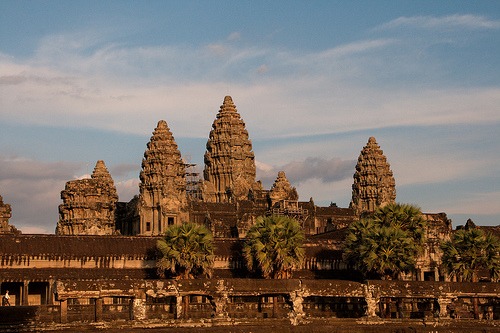 13. Siem Reap is the capital city of Siem Reap Province in northwestern Cambodia, and it’s the gateway to the Angkor region. Angkor–which means “city”–served as the seat of the Khmer Empire, which flourished from approximately the 9th to 15th centuries. Angkor spreads over an area of over 60 miles and contains 1,000 stone temples set upon forest and farmland.

One of these temples in particular, Angkor Wat, is the heart and soul of Cambodia. Built in the early 12th century,this temple–which at first was a Hindu temple and then a Buddhist temple–continues to be the largest religious monument in the world. Today, it continues to serve as a house of worship and is featured on the Cambodian flag.

The four mile temple has five central tours, representing the sacred Mount Meru, the center of the universe in Hindu mythology. The moat surrounding Angkor Wat symbolizes the oceans. 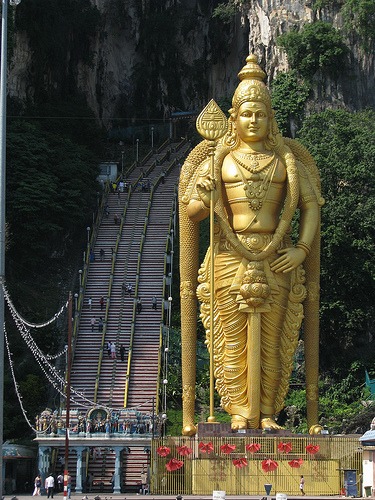 14. See the Lord Murugan Statue situated outside the Batu Caves in Gombak, Malaysia (13 kilometers north of the capital, Kuala Lumpur). Lord Murugan is a Hindu deity, and the gold plated statue of Lord Murugan is 42.7-meters (140 ft) high. 15. Visit the Hagia Sophia in Istanbul, Turkey. The Hagia Sophia was built by the Byzantine emperor Justinian in the early 6th century, and for a thousand years it was the largest cathedral in Christendom. In the mid-fifteenth century, Constantinople (as Istanbul was then known) fell to the Ottoman Turks, and Hagia Sophia was converted into a mosque. Today, it’s a museum. This building is considered to be the epitome of Byzantine architecture. 16. See the Sultan Ahmed Mosque –commonly known as the Blue Mosque–in Istanbul, Turkey. It t was built from 1609 to 1616, at a stone’s throw from Hagia Sophia.

Live your best life by making a list of life goals that include everything that you want to see, do, and experience.

Next post: 16 Personal Development Goals That Will Make You Happier and Sexier