How to Not Give Up – 8 Strategies for Not Quitting 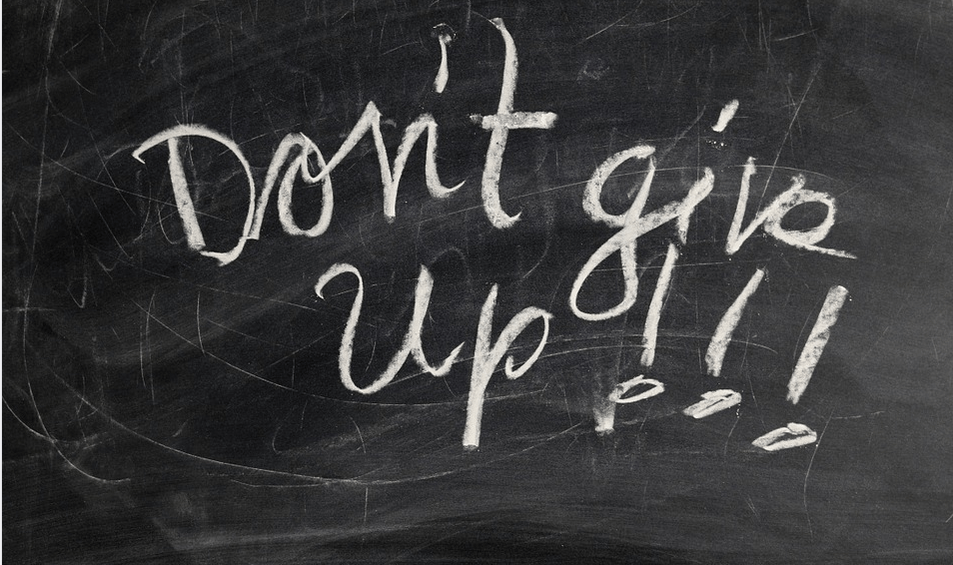 When you’re pursuing a worthwhile goal it’s almost inevitable that at some point you’ll think one or more of the following:

And when you do have one—or more—of these thoughts, it’s very likely that you’ll want to give up. When that happens, come back to this blog post to stop yourself from quitting. Below you’ll find 8 strategies for not giving up.

I just finished watching the fourth season of “House of Cards” – an American political drama about a Congressman and his wife who will stop at nothing to achieve their goal of climbing up the political ladder. Now, the protagonists of the show–Frank and Claire Underwood–are definitely not good role models. They’re ruthless, manipulative, self-centered narcissists.

But the one thing that they do have going for them is that they just won’t give up. Even if all the tables are turned against them, they keep going.

Not giving up is a mindset. And it’s a mindset that you can adopt. Fortunately, you don’t need to have a personality disorder—like the Underwoods–to refuse to give up, no matter what. Instead, what you do need is to constantly tell yourself the following:

Having an “I won’t quit” mindset will make it much easier for you to persist—and refuse to give up—until you achieve your goal.

2. Watch Someone Else Persevere.

We can learn a lot by watching other people. And learning to persevere is no exception.

There are lots of great movies out there which are based on real life stories about people who faced incredible odds and seemingly insurmountable obstacles, but who nonetheless refused to quit. And they managed to achieve what they were after.

Sitting down to watch these movies can be helpful when you feel like quitting. Here are three examples of inspirational movies which will allow you to watch someone else persevere (so you can follow suit):

Watching others refuse to give up will strengthen your own resolve to keep going. Tell yourself the following: “They didn’t quit, and neither will I.”

I’m sure you’ve seen TV shows in which someone decides to stop abusing alcohol, so they join AA (Alcoholics Anonymous). One of the things AA does for them is give them a sponsor. If they ever feel like having a drink, they’re supposed to call their sponsor so that their sponsor can talk them out of it.

When you’ve been chasing an important goal for a while, but you haven’t made much progress and you feel like giving up, call someone whom you know will talk you out of quitting. You can think of this person as a “goals sponsor”, if you will. Resist the urge to give up by calling your goals sponsor.

One of the most important steps in setting a goal is to create a list of all the reasons why you want to achieve that goal. In fact, if you discover that you don’t have a strong enough “why” for a particular goal, it’s probably a good idea to discard it. After all, your “why’s” are what will motivate you to continue striving for a goal, even when the going gets tough.

When you feel like quitting, look at your list containing all of the reasons why your goal is so important to you. If need be, add even more reasons why. The greater the quantity of reasons—and the stronger the reasons—that you have to keep going, the more likely it is that you won’t quit.

Refusing to give up doesn’t mean that you should simply keep doing the same thing over and over again. If the approach that you’re currently using isn’t working, try a different approach. Continue in this way until you find a method, technique, or strategy that does work.

Tell yourself the following:

When you want to give up, take out a pen and a piece of paper and start brainstorming different alternatives you can try. Then, choose one of them, and try it!

6. Succeed at Something Else.

Human beings love being rewarded. In fact, we crave it.

When you’ve been working toward the achievement of a goal for a long time, but your efforts haven’t resulted in any rewards—you haven’t made any money, you haven’t achieved anything you can brag about to others, you don’t really feel like you can pat yourself on the back, and so on–you’ll probably be tempted to quit.

One way to stop yourself from quitting is to take a break and go do something else that you know will be rewarded. Here are some examples:

Remind yourself of what success feels like. Then, allow that success to sustain you for a while longer while you take another swing at your goal.

7. Use Failure As a Stepping Stone.

In 2008 Hillary Rodham Clinton— then the junior United States Senator from New York– wanted to be president of the United States. She announced her decision to run and campaigned her heart out. However, she didn’t even succeed in getting the Democratic party’s nomination, much less was she elected president.

Even though she failed, she didn’t give up on her goal. Instead, she accepted a position as Secretary of State. After all, being Secretary of State put her one step closer to the White House. It was a stepping stone.

Now, in 2016, she’s running for president once again. And—because of the foreign policy experience she gained as Secretary of State–she’s in a stronger position than she was back in 2008. I don’t know if she’ll win the presidency, but at least she hasn’t given up on her goal of becoming the first female president of the US.

If you fail as you try to achieve your goal, instead of using that failure as an excuse to quit, use it as a stepping stone.

When you want to quit, push yourself to keep taking consistent action toward the achievement of your goal. Even if you haven’t seen results yet, you never know what may be happening underneath the surface. Look at the following:

Just because you can’t see anything yet, although you’ve been working on your goal for awhile, this doesn’t mean that nothing is happening. You may be closer to achieving your dream than you think. Don’t give up, when you could be just moments away from succeeding. Keep chipping away.

Achieving large, hairy goals isn’t easy. Somewhere along the way it’s very likely that you’ll want to quit. But when you feel like quitting, don’t give up. Live your best life by refusing to quit. Start by applying the 8 strategies explained above.

Next post: How to Laugh More – 22 Ways to Bring More Laughter into Your Life