The Buddhist Path to Happiness 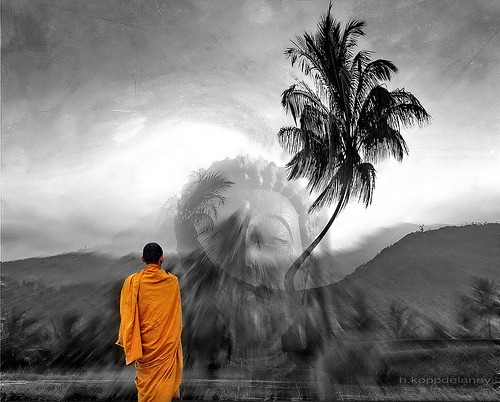 The message of the Buddha is traditionally known as the Four Noble Truths.  The last of these four truths sets out eight steps to happiness, which are: skillful understanding, skillful thinking, skillful speech, skillful action, skillful livelihood, skillful effort, skillful mindfulness, and skillful concentration.

Although skillful mindfulness is one of the eight steps, it also underlies each of the other steps. In other words, bringing mindful awareness to every aspect of your daily life is a key component of happiness.

Below you’ll find tips and techniques offered by three different Buddhist monks to help you lead a more mindful, and ultimately a happier, life.

Matthieu Ricard: Well-Being Is a Deep Sense of Serenity and Fulfillment

Buddhist monk Matthieu Ricard was born in Paris.  The son of a renowned French philosopher, he grew up surrounded by the great thinkers and personalities of the time.  Ricard is the author of the book “Happiness: A Guide to Developing Life’s Most Important Skill”. He has devoted his life to trying to answer these two questions:

Ricard’s conclusion is that we can train our minds in habits of happiness.

In his TED.com talk, Ricard explains that instead of trying to define “happiness”, we should call it well-being. In addition, well-being is not just a mere pleasurable sensation; it’s a deep sense of serenity and fulfillment. It’s a state that pervades and underlies all other emotional states–all the joys and sorrows that come one’s way. Well-being is a state of being; it’s not just a fleeting emotion.

Ricard adds that very often in our quest for happiness we look outside. We think that if we could gather this and that, then we would be happy. However, our control over the outer world is limited, temporary, and often illusory. So, what if one of the things that we think we need in order to be happy is missing? Then it all collapses.

If we look inside, instead of looking outside of ourselves, we realize that it’s the mind that translates the outer conditions into happiness or suffering. Look at the two following types of people:

According to Ricard, it all comes down to training the mind, and the best way to train the mind is through meditation.

Henepola Gunaratana: Our Happiness Is a Result of Our Actions

that the Buddha’s path is grounded in common sense and in careful observation of reality.

The Buddha understood that if we looked carefully at our lives we would realize that the choices we make lead to either happiness or unhappiness. And once we understand this principle thoroughly, we will be able to make good choices, because we want to be happy.

The Buddha pointed to ten actions which are always unskillful because they inevitably lead to suffering for both the doer and the recipient. These ten actions are the following:

In addition, any action that comes from a mind that is filled with greed, hatred, or delusion leads to suffering and is therefore unskillful or wrong.

In order to act wrongfully, you have to be lying to yourself about cause and effect. That is, you’re acting against the basic truth that actions have consequences. If you train yourself to be mindful of what you do, and ask yourself whether what you’re about to do is likely to lead to positive or negative results, you’ll be heading in the right direction.  You’ll be heading toward happiness.

Thich Nhat Hanh: Happiness is Being at Peace In the Present Moment

Vietnamese Thich Nhat Hanh is the first Buddhist monk I ever read and he still remains my favorite (yes, I have a favorite Buddhist monk).  In his book, “Peace Is Every Step: The Path of Mindfulness in Everyday Life”

he explains that we can breathe, walk, and eat our meals in a way that allows us to be in touch with the abundance of happiness that is available.

In his book Thich Nhat Hanh offers a variety of simple, very accessible techniques in order to help us remember that happiness is all around us. One of the things he recommends is that you hang up a reminder in your room so that the first thing you do as soon as you wake up each morning is smile. This reminder can be anything:

Smiling will help you to approach the day with gentleness and understanding. Thich Nhat Hanh adds that a friend once wrote the following short poem:

“I have lost my smile,
but don’t worry,
the dandelion has it.”

The message in the poem is that even if you’ve momentarily lost your smile, as long as you realize that a dandelion is keeping it for you, the situation is not so bad. That is, even if something has gone wrong in your life, there’s always something positive that you can choose to focus on.

In order to be happy, look for happiness within, instead of seeking it outside of yourself; analyze the consequences of your thoughts, words, and actions; and focus on the happiness and abundance that is all around you. Follow the Buddhist path to happiness, and live your best life.

Previous post: 15 Extremely Useful Things You Can Do In 15 Minutes