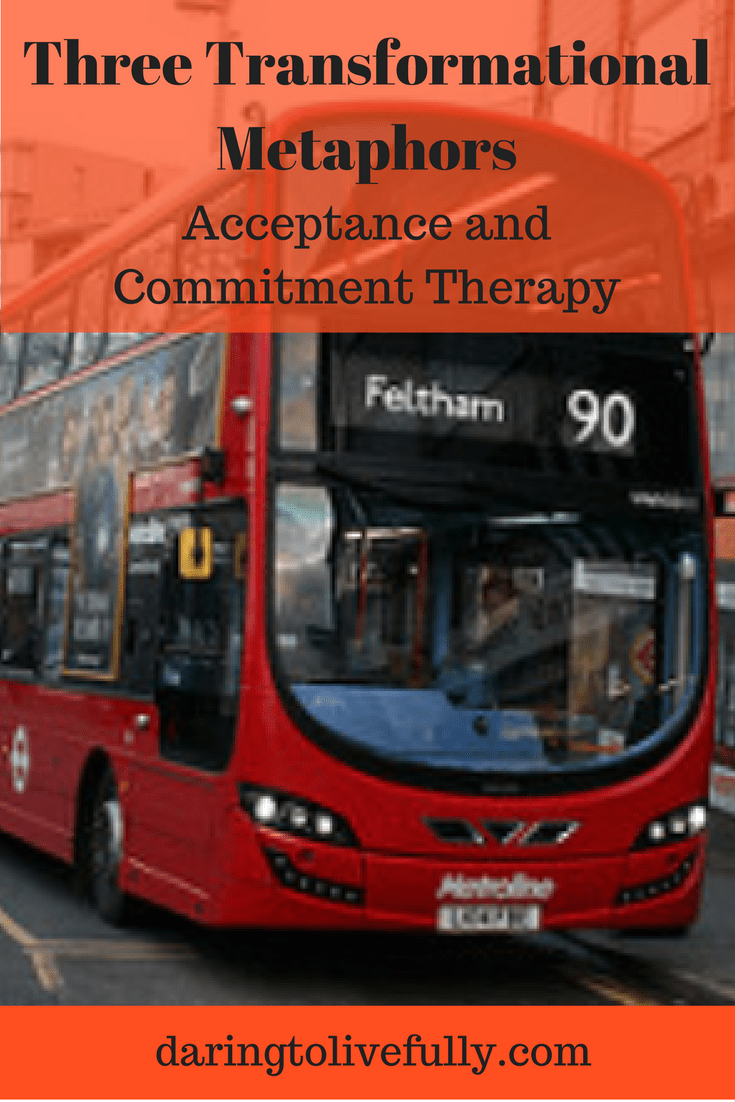 Metaphors are a powerful tool for resolving issues that may be holding you back.

A couple of days ago I came across a type of therapy called Acceptance and Commitment Therapy (ACT). ACT has two major goals:

Metaphors are a popular ACT tool. When I read this I was immediately drawn to ACT because I love metaphors. In fact, I recently wrote a blog post using a garden metaphor.

But, why use metaphors as a transformational tool? Metaphors can draw attention to salient features of a situation that may go unnoticed in a person’s real-world environment. They can also make abstract concepts concrete, and create a verbal world in which people can explore new behaviors.

In this post I’m going to share with you three of the most popular metaphors used by ACT practitioners. The purpose of these three metaphors is the following:

The three metaphors we’re going to be discussing are the following:

You’ll find an explanation of each of these metaphors below.

Passengers On a Bus

Let’s pretend that you’re a bus driver. The bus that you’re driving is full of passengers. The passengers represent your thoughts, feeling, memories, and emotions. As you drive along you can hear the passengers mumbling and saying things like the following:

However, as long as you stick to driving along the “Same Old Route”, the passengers pretty much stay in their seats at the back of the bus and don’t make too much of a racket.

The real problem starts when you try to turn in a different direction, such as turning right on “Dreams Road” or turning left on “New Experiences Avenue”. If you try doing this, the passengers get really upset.

The moment you push the turn signal to turn right or left, the passengers leave their seats, they stand in the aisle, and they start yelling at you:

There are a lot of passengers on the bus, and some of them are big and scary looking. Therefore, you decide it would be best to listen to them and just stay on the same road. The passengers respond to your decision to have everything stay the same by sitting and quieting down.

Some time goes by and you start getting bored. You’re tired of always driving down the same street and you want to try something new. Nonetheless, when you once again try turning down a different road, the same scenario takes place. The passengers riot—they scream and make threats.

By now you’ve had it. You stop the bus and you tell the passengers to get off. However, they refuse to do so.

You stand up and you wrestle with a couple of the passengers and try to push them off the bus, but they’re too strong. It doesn’t matter how hard you push, they simply resist. You give up, sit back down at the wheel of the bus, and start driving down “Same Old Route” again.

Then, one day, it suddenly hits you: the passengers can yell at you and threaten you, but they can’t actually hurt you. That’s when you decide to drive down “Dreams Road” no matter how upset the passengers get. Sure enough, as soon as you turn to the right all hell breaks loose.

Nonetheless, you stick to your guns and you keep going down “Dreams Road”. After all, it’s your bus, you’re the one who’s driving, and you decide where to go. Now the passengers are screaming in your ear, stomping their feet, and getting blue in the face. You feel somewhat anxious, but you keep driving.

You accept that you’re going to have put up with the passengers’ insults and derision. But that’s not going to hold you back any longer. You’re committed to driving down “Dreams Road”, and the passengers on the bus are just going to have to come along for the ride, whether they like it or not. 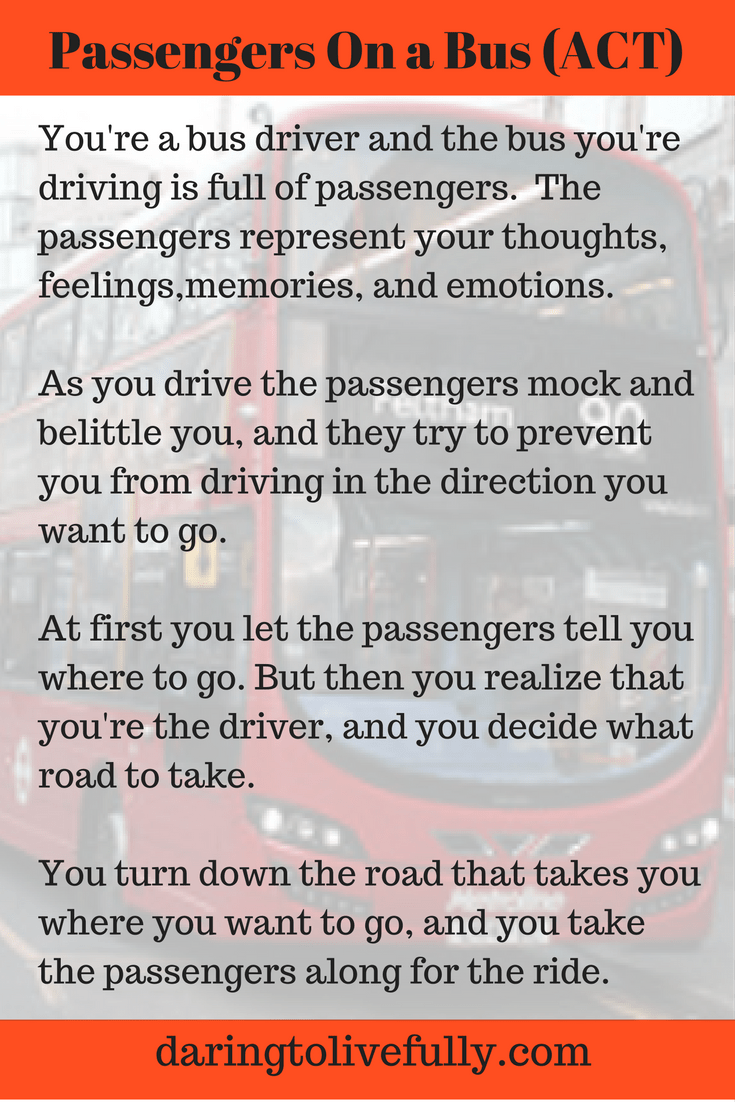 Breaking Out of Corpus Delicti

Sometimes people will play the role of Victim because it serves a purpose in their lives. It allows for others to see that they’ve had to endure an injustice. Basically, they turn themselves into evidence of someone else’s wrongdoing.

Think of the crime shows that you’ve watched, such as CSI or Law & Order. You may have heard the term “corpus delicti” mentioned on these shows. The term refers to the fact that there has to be a body in order to prove that a crime was committed. No body, no crime–so the suspect walks free.

In much the same way, you may think that if you move on with your life after you’ve been gravely hurt by someone else, then there won’t be “a body”, so justice won’t be served. That is, if you start doing well, people won’t believe you when you tell them that so-and-so hurt you. They’ll think the following:

“Yeah, right. If that were true, this person would be a mess right now. And they’re not a mess. In fact, they’re doing great. They must be making it up, or at least they’re exaggerating. Whatever happened to them can’t have been that bad.”

Since you want justice—you want other people to know what a jerk the person who hurt you is—you make sure that your life reflects the injustice that was done to you. You do this by acting in a way that is consistent with the harm that you’ve gone through.

As an illustration, you may say things like the following to yourself and to others:

However, stop and consider whether living this way is really serving you well. It’s understandable that you want your suffering to be acknowledged. Wanting justice is a normal response when a transgression has been committed. But, ask yourself: “Justice, at what expense?”

Tell yourself that you don’t need to act like the walking dead anymore, and release yourself from the need to have your life be evidence that you’ve been harmed. Stop playing the role of Victim in an attempt to get justice. Instead, get revenge by building a great life for yourself. 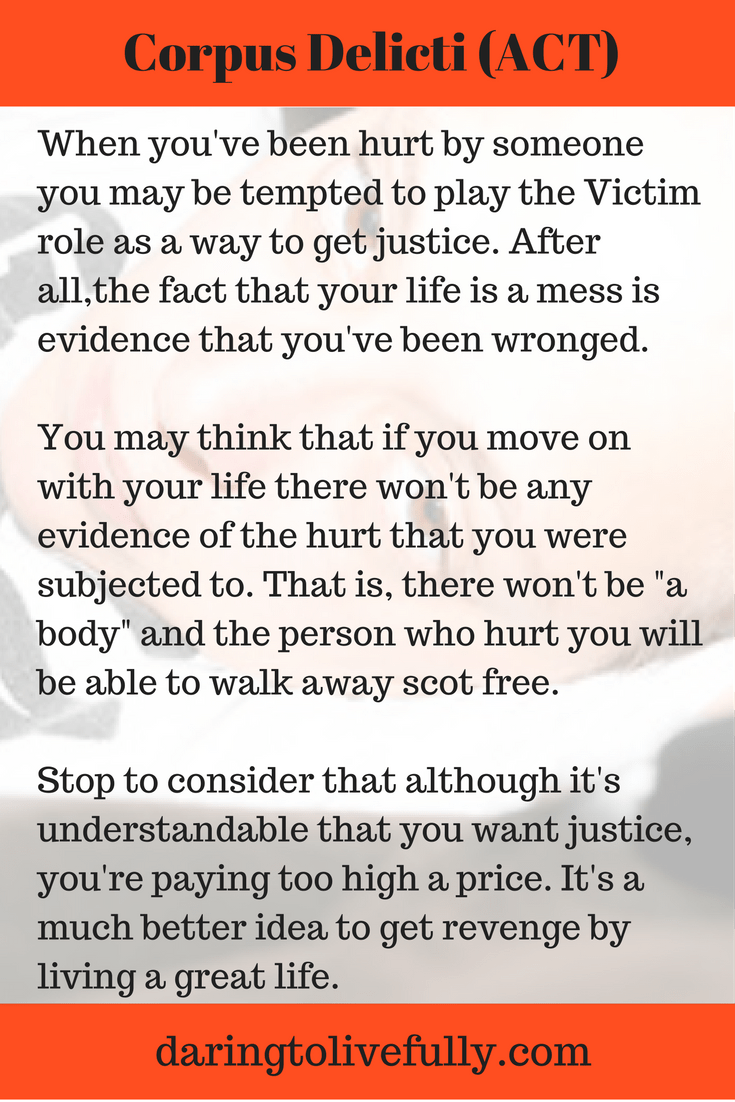 Second, realize that the hand that you’re holding may not be what you wanted, but it’s the hand you were dealt. You have to play the game to the best of your abilities with the cards you have in your hand. Only those cards are within your control.

After all, what other option do you have? Are you going to throw the cards down on the table and give up? If you do that, you lose. Isn’t it a much better idea to give it a shot? If you play your cards right, you can get better cards, and you may even win. 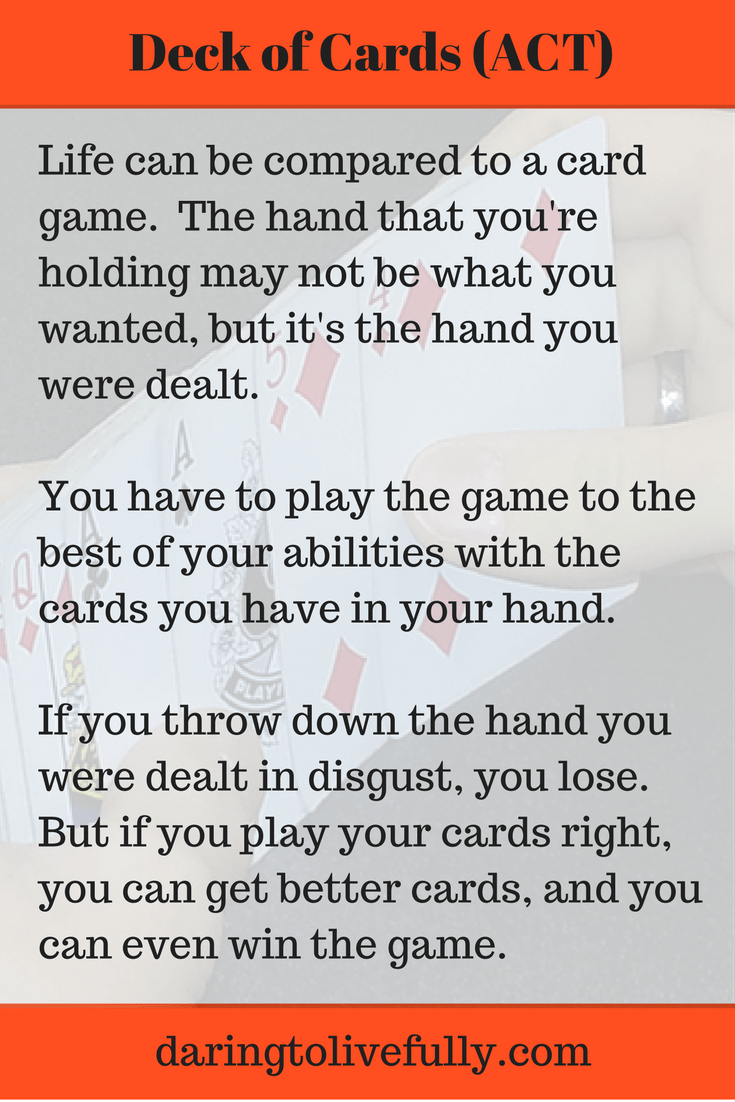 What did you think of these three metaphors? Apply them in your own life in order to prevent negative thoughts and emotions from holding you back; to break out of the Victim Mentality; and to make sure that you do what you can with what you have, instead of waiting for things to change before you act.

Live your best life by using the metaphors applied in Acceptance and Commitment Therapy.

Next post: How to Manage Worry – 8 Healthy Ways to Deal With Worry