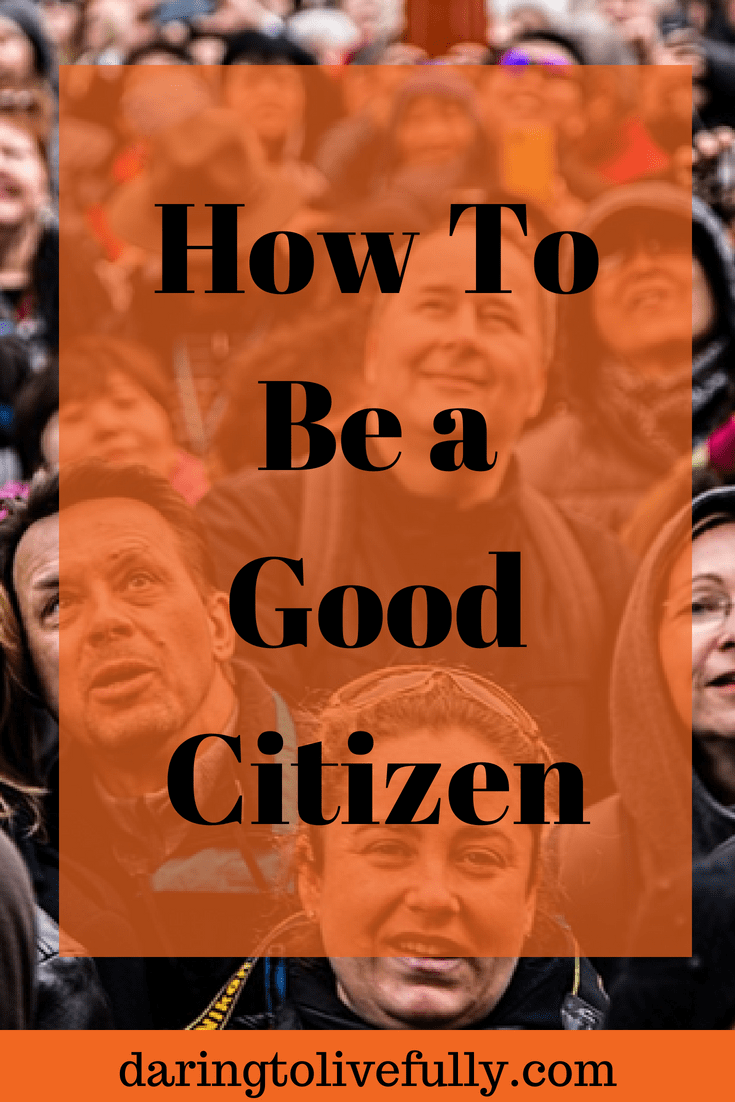 We should all aspire to be good citizens of our country, and of the world.

The concept of citizenship was born in the city-states of Ancient Greece; specifically, in Athens. Greek education at the time was designed to instruct citizens in the values, intellectual frameworks, and habits-of-mind required to be free men. That is, to actively participate in the political system that shaped their lives and guaranteed their freedoms.

Today, being a citizen means that you’re part of a group, and that you have legal and political rights within that group. It brings with it both privileges and obligations. I would argue that we each have a duty, or an obligation, to be good citizens. After all, a nation is only as healthy as its individual citizens.

Nonetheless, in modern times, people generally aren’t educated on how to be good citizens. Therefore, I asked myself the following questions: “What does it mean to be a good citizen?”, and, “How do you become a good citizen?” In this post I’m going to share with you the answers that I came up with.

Below you’ll find 10 ways to be a good citizen.

1. A Good Citizen is Patriotic.

Patriotism is having and showing devotion for your country. It means having an attachment to certain national cultural values and showing critical loyalty to your nation. Some ways to show patriotism include the following:

At the same time, keep in mind that patriotism should not be confused with nationalism. Nationalism is thinking of your nation as being superior to others, and worthy of dominance. Patriots are proud of their country, but they understand that other people are also rightly proud of theirs.

Look at the words of a church hymn written in 1934 by the American Lloyd Stone to the melody of Finlandia by the Finnish composer Jean Sibelius:

This is my song, Oh God of all the nations,
A song of peace for lands afar and mine.
This is my home, the country where my heart is;
Here are my hopes, my dreams, my sacred shrine.
But other hearts in other lands are beating,
With hopes and dreams as true and high as mine.

The personal qualities of a good citizen include the following:

Imagine what your country would be like if all its citizens strived to achieve these personal qualities. Start by adopting them yourself.

There are two ways in which you can develop the characteristics listed above. In my post on How to Develop Your Character – Benjamin Franklin’s Thirteen Virtues, I explain that at the age of twenty Benjamin Franklin resolved to always do right and avoid any wrongdoing.

The way in which he planned to achieve this was by creating a list of 13 virtues. He also created a plan for developing those virtues. I recommend you do something similar.

In addition, in his youth George Washington captured 110 Rules of Civility & Decent Behavior. They were rules for comporting oneself in a way that would be respectful of others, and of the self. Look through the rules and come up with your own set of rules of behavior.

3. Be a Productive Member of Society.

A good citizen contributes to their nation by being productive. They’re productive employees, business owners, artists, public servants, caregivers, and so on. Good citizens share their skills, talents, and abilities with others. They make a positive contribution to their nation.

4. Be Active In Your Community.

Here are some ways to be active in your community:

Here are some ways to better your community:

Instead of being cooped up in your home glued to a technological device, get out there and become an active member of your community. It will make you a better citizen.

Read to educate yourself about the important issues facing your nation. In 1761, John Adams implied that one of the reasons to emphasize literacy is that it makes people better citizens. Look at the following quote:

“Every man has in politics as well as religion a right to think and speak and act for himself. I must judge for myself, but how can I judge, how can any man judge, unless his mind has been opened and enlarged by reading?”

If you’re asking yourself what you should read to keep well-informed, here are some suggestions:

A country depends on a well-informed and civic minded population to safeguard the people’s individual freedoms and political rights. A good citizen remains vigilant in order to ascertain that the government is doing all of the following:

To do this, a citizen must have the basic skills necessary to be able to assess arguments logically and critically.

In addition, if a citizen believes that the government is overstepping its bounds or failing in its duties, the citizen must speak up. In the words of Thomas Jefferson:

“All tyranny needs to gain a foothold is for people of good conscience to remain silent.”

7. Participate in Your Nation’s Political Life.

If you want to be a good citizen, you should be politically active. There are many ways to this. Here are some ideas:

As a citizen, you have the right to have your voice heard. Exercise that right.

Today’s kids are tomorrow’s citizens. Help shape the citizens of the future by mentoring kids. Some ideas on ways you can mentor kids are the following:

A while ago I published a post on how to leave a legacy. A great legacy to leave your nation is to play a part in forming good citizens who will contribute to the nation’s well-being.

The third point in this blog post indicates that a good citizen has to be productive. That is, they need to have the knowledge necesary to produce in today’s world — technical skills, legal skills, medical skills, and so on. However, a good citizen should also be well-rounded.

A well-rounded person is better at creative problem solving and innovation than a person who is not well-rounded. In addition, they can make contributions not only to a country’s GDP, but also to the cultural wealth of their nation.

Here are some of the qualities of a well-rounded person:

10. Order Your Corner Of the World

Your home is a microcosm of your country. If you want to live in a clean, healthy, prosperous, happy nation, start by creating these circumstances at home.

I, for one, am making an effort to be a good citizen of Panama, and of the world. How about you? Live your best life by being a good citizen.

Next post: 10 Ways to Make Your Day More Zen: How to Have a Zen-Like Day