10 Habits that Will Make You a Stronger, Happier, Better Person 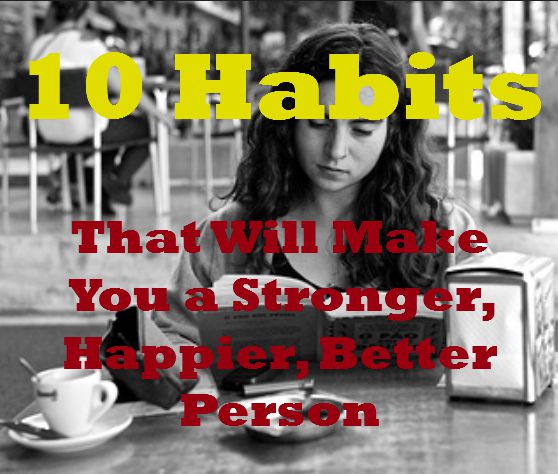 At the beginning of 2015 I asked myself what habits I wanted to create this year.

In the first nine months–or 2/3– of 2015, I’ve created 10 new habits. I honestly believe that adopting these habits has made me a stronger, happier, and better person. That is, I’m now better than I was when the clock struck twelve on December 31st, 2014.

The ten habits that I have to thank for helping me to move up a notch–or two–on the ladder of life in the past nine months are the following:

Once I’m done with my morning routine I shower, brush my hair, and get dressed, and I’m ready to go out the door.

2. Weight Lifting. Although I’ve been exercising on a regular basis for years—I’m an avid runner—, weight lifting was not part of my exercise regime. However, after reading about the myriad of benefits of weight lifting, I decided to reduce the amount of cardio that I was doing and start hitting the gym three days a week.

Since mid-April, I’ve been doing the following:

As a result of creating the habit of weight lifting I’ve lost weight, and I look—and feel—more fit and toned. In addition, I’ve grown stronger.

3. Reading. When I was growing up, and all through college, I read voraciously. I’ve always loved reading. However, once I got into law school I lost the habit of reading for pleasure (I had more than enough reading to do for school).

I never really picked up the habit again, until about four months ago. That’s when I started setting aside one-hour-a-day to read quality fiction, every day. In fact, I started a “be well-read project”. So far, I’ve read the following:

4. Writing 1000 Words a Day. This year I’ve created the habit of writing 1,000 words a day (at least), whether I’m inspired to do so, or not. I either write an article for this blog, or I add another section to whatever eBook I happen to be working on at the moment. Here’s why this is an important habit to adopt:

Why did I adopt this habit? Because I’m a writer, and writers write.

5. Drinking Water Throughout the Day. Panama is hot all year-round –it often feels like a furnace. In addition, as I’ve already pointed out in this post, I exercise a lot. However, I’ve never been very good about drinking the amount of water that my body needs to stay hydrated.

This year, that has changed. I got myself a Lifefactory glass water bottle—which I highly recommend (mine is red)—and I created the habit of carrying it around with me all day long and drinking from it regularly.

As a result of creating this habit I don’t get drowsy while I’m working like I used to, I have more energy, and my skin looks fantastic.

6. Dwelling on Positive Experiences. Whenever something positive happens to me throughout the day—I get an email from someone saying one of my eBooks changed their life, a friend compliments me, or I move one of my goals forward—I stop and let it sink in for at least thirty seconds.

I adopted this habit in order to combat the negativity bias – the brain’s tendency to pay more attention to, and remember more vividly, negative input from the environment. By dwelling on the good I’m rewiring my brain for happiness.

That is, my new habit is counteracting the negativity bias and has made me a happier person.

7. Reading the News. A lot of people feel that reading the news is a waste of time –after all, they’re reading about things that are outside their circle of influence. If there’s nothing they can do to influence world events, why bother knowing what’s going on?

Well, I’m not one of those people. I think it’s important to be informed. That being said, I don’t spend a lot of time reading the news: I spend just enough time to be aware of the most important issues and news of the day. Here’s what I read:

Creating this habit has helped me to ensure that whenever I’m with a group of people and they start discussing current events, I can jump right in and make a smart contribution to the conversation. In addition, I believe that knowing what’s going on in my country–and abroad–makes me a better citizen.

8. Performing Random Act of Kindness. Every day I’m consciously on the lookout for something positive that I can do for someone else that day. It’s usually something small, like the following:

There’s a lot of research out there done by positive psychologists that shows that being kind to others raises your levels of happiness. Therefore, just like dwelling on the good things that happen to me each day, this is a habit that I’ve adopted in order to increase my happiness levels.

9. Applying the 20-20-20 Rule. Near the beginning of the year I noticed that my eye sight was getting blurry. I concluded that this was because of all the time that I spend staring at a computer screen, and I decided to research how to fix the problem. That’s how I found the 20-20-20 rule.

The rule is as follows: every 20 minutes, take a break for 20 seconds, and look at an object that’s at least 20 feet away. I’ve been doing this for about two months now. As a result of adopting this habit, my vision has become a lot less blurry.

When I’m done with my night routine I brush and floss my teeth, wash my face, put on my pj’s, and I’m ready for bed.

There’s only one-third of the year left to adopt the habit, or habits, which you promised yourself you would create at the beginning of the year. Be a better person by the end of 2015 by creating at least one new habit. Live your best life by adopting positive habits, such as the ten I outline above.

Next post: Skyrocket Your Charisma: 20 Brilliant Ways to Do It

Previous post: 35 Pieces of Life Changing Wisdom that Will Make You More Powerful and Successful