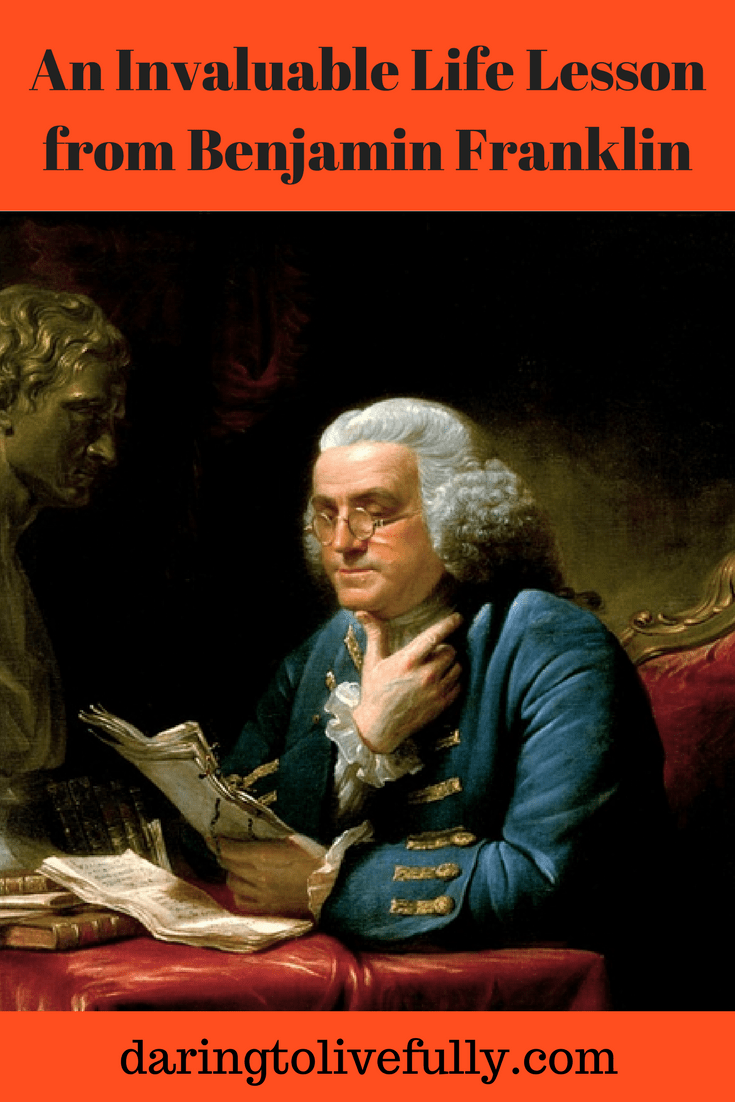 There are many life lessons that can be found in Benjamin Franklin’s writings.

I’m a huge Benjamin Franklin fan. Franklin, of course, was one of the Founding Fathers of the United States of America. He was also a polymath, author, politician, scientist, and inventor. In addition, he was a self-improvement devotee.

Fortunately for us, this wise man left behind an autobiography, letters that he wrote to friends, and several other books he penned. From these documents, we can glean nuggets of wisdom which can help us lead better lives.

In 1779, Franklin wrote a letter to a friend, Madame Brillon. In his letter, Franklin recounts an event from his childhood which taught him a life lesson that he never forgot. When he was about seven years old, on impulse, he bought a whistle from another child for a lot more money than the whistle was worth.

This taught him a lesson on being careful when buying material items not to pay more than the item was worth. But it also taught him to be careful before making any sort of expenditure. This included time; effort; attention; intangibles such as dignity and self-respect; and so on.

Below you’ll find the letter that Franklin wrote to his friend. Then, after the letter, you’ll find 20 questions that will help you to avoid paying more for anything than the thing is worth.

The Whistle by Benjamin Franklin

“In my opinion we might all draw more good from it than we do, and suffer less evil, if we would take care not to give too much for whistles.

For to me it seems that most of the unhappy people we meet with are become so by neglect of that caution.

You ask what I mean? You love stories, and will excuse my telling one of myself.

When I was a child of seven years old, my friends, on a holiday, filled my pocket with coppers. I went directly to a shop where they sold toys for children; and being charmed with the sound of a whistle, that I met by the way in the hands of another boy, I voluntarily offered and gave all my money for one.

I then came home, and went whistling all over the house, much pleased with my whistle, but disturbing all the family. My brothers, and sisters, and cousins, understanding the bargain I had made, told me I had given four times as much for it as it was worth; put me in mind what good things I might have bought with the rest of the money; and laughed at me so much for my folly, that I cried with vexation; and the reflection gave me more chagrin than the whistle gave me pleasure.

This, however, was afterwards of use to me, the impression continuing on my mind; so that often, when I was tempted to buy some unnecessary thing, I said to myself, ‘Don’t give too much for the whistle; and I saved my money.’

As I grew up, came into the world, and observed the actions of men, I thought I met with many, very many, who gave too much for the whistle.

When I saw one too ambitious of court favor, sacrificing his time in attendance on levees, his repose, his liberty, his virtue, and perhaps his friends, to attain it, I have said to myself, this man gives too much for his whistle.

When I saw another fond of popularity, constantly employing himself in political bustles, neglecting his own affairs, and ruining them by that neglect, ‘He pays, indeed,’ said I, ‘too much for his whistle.’

If I knew a miser, who gave up every kind of comfortable living, all the pleasure of doing good to others, all the esteem of his fellow-citizens, and the joys of benevolent friendship, for the sake of accumulating wealth, ‘Poor man,’ said I, ‘you pay too much for your whistle.’

When I met with a man of pleasure, sacrificing every laudable improvement of the mind, or of his fortune, to mere corporeal sensations, and ruining his health in their pursuit, ’Mistaken man,’ said I, ‘you are providing pain for yourself, instead of pleasure; you give too much for your whistle.’

If I see one fond of appearance, or fine clothes, fine houses, fine furniture, fine equipages, all above his fortune, for which he contracts debts, and ends his career in a prison, ‘Alas!’ say I, ‘he has paid dear, very dear, for his whistle.’

When I see a beautiful sweet-tempered girl married to an ill-natured brute of a husband, ‘What a pity,’ say I, ‘that she should pay so much for a whistle!’

In short, I conceive that great part of the miseries of mankind are brought upon them by the false estimates they have made of the value of things, and by their giving too much for their whistles.”

Are You Paying Too Much for Your Whistle?

It’s likely that there have been many times in the past when a soft voice in your head tried to warn you that you were paying too high a price for certain things. This could include things like the following:

Do any of these sound familiar? Even if you’ve paid too much for things in the past, you can stop doing so now. Here are 20 questions to help you determine whether you’re paying too much for whistles:

1. Do I really want this, or is this something society is telling me I should want? (This can apply to anything: items, careers, status symbols, relationships, and so on.)

2. Is this item worth the amount of time that it took me to earn the amount of money that it sells for (i.e., if you make $30 an hour, an item that sells for $90 is equivalent to three hours of work)?

3. Should I wait 72 hours before deciding whether I should buy this?

4. Are there any cheaper alternatives?

5. What is the real cost of this item (including maintenance, repairs, storing, cleaning, additional parts that must be purchased, and so on)?

6. If I’m going to finance an item, what is the cost of the item once I factor in the amount of interest that I’m going to have to pay?

7. Is this costing me my mental or physical health? (For example, is a highly stressful job that doesn’t leave you enough time to exercise and practice self-care worth it—even if you make a lot of money?)

8. Is this relationship worth the amount of heartache it’s costing me?

9. Is this friendship worth the amount of inner peace it’s costing me? Is it worth holding myself back so that “my friend” doesn’t feel inferior?

10. Is this goal worth the amount of time, effort, and energy expenditure that it’s costing me?

11. What could I buy with this money, instead?

12. What could I be doing with my time, instead?

13. Does this task justify the amount of time it takes to complete it?

14. When I factor everything in, what am I really trading for this–including things such as happiness, love, life meaning, passion, honor, dignity, and self-worth?

15. Is this brownie covered in vanilla ice cream worth the calories?

16. Is this meal of a cheeseburger and fries worth an increased risk of heart disease?

17. Is relaxing on the couch and watching TV worth missing another workout?

18. Is the feeling of safety that comes from staying in my comfort zone worth the cost of not going after my dreams?

19. Is partying with my friends worth getting bad grades because I don’t have enough time left over to study?

20. What is this costing me in terms of what I value most in life?

Live your best life by estimating the real cost of things. Don’t give too much for whistles.

Next post: Flourish or Flounder: Analyze Your Personal Projects