The Three-Step Formula For Success 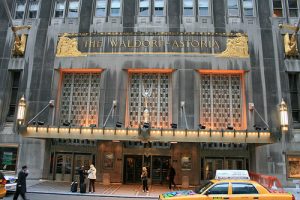 Conrad Hilton—founder of the Hilton Hotel chain, and known as “Innkeeper to the World”—achieved his phenomenal success by following a simple three-step formula. In this article, you’ll discover what that formula is. Replicate it, and achieve your own success.

Hilton was born in the small town of San Antonio, New Mexico, in 1887. His father owned a general store and would sell living supplies to men working in the backwoods of New Mexico. In his autobiography, “Be My Guest”—which for many years was placed in every Hilton hotel room–, Hilton credits his father’s example of hard work, as well as his mother’s religious faith, as major factors in his own success.

In “Be My Guest”, Hilton explains that his father’s advice for success was always “work”, while his mother’s advice was “pray”. Thus, he grew up listening to the “work-pray” mantra.

However, his brother—Barron—once noted that there had to be an additional ingredient. While writing “Be My Guest” at the age of 70—sitting in the ballroom of the legendary Waldorf-Astoria Hotel in New York, which he then owned—Hilton hit upon the missing ingredient: you have to dream.

Thus, the Conrad Hilton three-step formula for success is the following:

Each of these elements is explained below.

Dream – Decide What It Is That You Want

“To accomplish big things I am convinced you must first dream big dreams. True, it must be in line with progress, human and divine, or you are wasting your prayer. It has to be backed by work and faith, or it has no hands and feet. Maybe there’s even an element of luck mixed in. But I am sure now that, without this master plan, you have nothing.” – Conrad Hilton

Initially, Hilton’s dream was to start a bank. While looking for a bank that he could purchase, Hilton found himself one night at the Mobley, a rundown hotel in Cisco, Texas. This is where he discovered the opportunity which would eventually lead to his hotel empire. Despite its dilapidated condition, the hotel was doing a lot of business, and the numbers looked good. In addition, the owner was looking to sell. Hilton bought it.

The Mobley was the first of several decrepit hotel properties—with lots of room for potential– which Hilton would buy.

At this point, Hilton’s dream shifted from owning a bank, to owning a chain of hotels around Texas. Then, his dream grew even bigger: he wanted to build his own “Hilton” hotel. He was able to raise a million dollars and—although he ran out of money twice– in August 1925 the Hilton Hotel, Dallas, opened. Hilton kept building hotels and he kept expanding his empire.

In the Fall of 1929, Hilton built his ninth hotel: the El Paso, Hilton. Nineteen days after it opened, the stock market crashed. That was the beginning of the Great Depression.

Pray – Have Faith That You Will Achieve Your Dream

During the Great Depression, Hilton was nearly forced into bankruptcy. He lost several of his hotels (he was retained as manager and was eventually able to buy them back).

In the depths of the Depression, deep in debt, and with a court judgment against him, Hilton cut out a picture of the newly completed Waldorf-Astoria Hotel in New York. It was considered to be the greatest hotel in the world. Hilton told himself that one day he would own it. He would carry the picture around in his wallet as a reminder of what he was aiming for. Later, when he had enough cash again to buy a desk, he put the picture under the desk’s glass top.

Despite the huge gap that existed between being near bankruptcy, and owning the greatest hotel in the world, Hilton believed that he would be able to bridge that gap. He would look at the picture constantly with faith that one day, that hotel would be his. It gave him something to aim for, even when his prospects seemed weak.

Hilton realized his dream in 1949, when he became the owner of the Waldorf-Astoria.

“Success seems to be connected with action. Successful people keep moving. They make mistakes, but they don’t quit.”- Conrad Hilton

Hilton’s work ethic was legendary. He earned back the money that he had invested in the Mobley in one year. Then, he went on to restore other “flophouses” to their former beauty, and he turned them into goldmines as well.

Almost from the start, Hilton discovered the two principles that would guide him throughout his career as a hotelier. He referred to them as “digging for gold” and “esprit de corps”.

When it took Hilton six years to negotiate the purchase of The Stevens Hotel in Chicago, he simply had the following to say:

“If you are content with planting radish seeds you’ll get radishes in a few weeks. When you start planting acorns, the full-fledged oak may take years. And I was beginning to learn what all gardeners know – patience”.

Hilton eventually owned 188 hotels in thirty-eight cities in the U.S., along with fifty-four hotels abroad.

As a final note of advice, Hilton emphasizes the importance of not belittling your value or your self-worth:

“It has been my experience that the way most people court failure is by misjudging their abilities, belittling their worth and value. Did you ever think what can happen to a plain bar of iron, worth about $5.00? The same iron when made into horseshoes is worth $10.50, If made into needles, it is worth $3,250.85, and if turned into balance springs for watches its value jumps to $250,000.

This is true of another kind of material – You!”

So, there you have it; the three-step formula for success: dream, pray, and work.

1. Rule of Adulthood: You Have to Rescue Yourself
2. As a Man Thinketh – The Power of Right Thought
3. 5 Lessons From Motivation Mega-Star Jim Rohn
4. 101 Life Lessons – A Little Manual for Life