72 of the Best Success Quotes 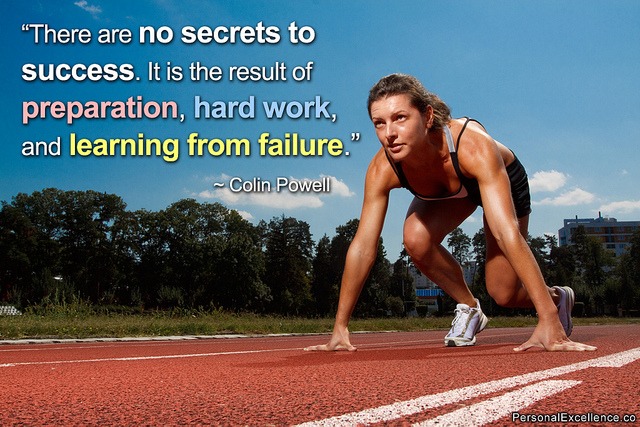 A good quote can inspire and motivate you to do what needs to be done in order to succeed in life.

You may have heard that success leaves clues. By reading quotes from those who have succeeded, you’ll be absorbing their wisdom and picking up pointers that you can apply to your own life. Below you’ll find 72 of the best success quotes to help motivate you to go after your dreams.

You can consider doing any of the following:

Here, then, are 72 of the best success quotes:

1. “Success is not the key to happiness. Happiness is the key to success. If you love what you are doing, you will be successful.” — Herman Cain

2. “Most successful men have not achieved their distinction by having some new talent or opportunity presented to them. They have developed the opportunity that was at hand.” — Bruce Barton

3. “Success is not to be pursued; it is to be attracted by the person we become.” — Jim Rohn

4. “Would you like me to give you a formula for success? It’s quite simple, really. Double your rate of failure. You are thinking of failure as the enemy of success. But it isn’t at all. You can be discouraged by failure or you can learn from it.  So go ahead and make mistakes. Make all you can. Because remember that’s where you will find success.” — Thomas J. Watson

5. “In order to succeed, your desire for success should be greater than your fear of failure.” – Bill Cosby

6. “Learn how to be happy with what you have while you pursue all that you want.” — Jim Rohn

7. “It is literally true that you can succeed best and quickest by helping others to succeed.” — Napoleon Hill

9. “The person who gets the farthest is generally the one who is willing to do and dare. The sure-thing boat never gets far from shore.” — Dale Carnegie

10. “Success is simply a matter of luck. Ask any failure.” — Earl Nightingale

11. “You have achieved success if you have lived well, laughed often and loved much.”– Anonymous

12. “Success means having the courage, the determination, and the will to become the person you believe you were meant to be.” — George Sheehan

13. “Take up one idea. Make that one idea your life – think of it, dream of it, live on that idea. Let the brain, muscles, nerves, every part of your body, be full of that idea, and just leave every other idea alone. This is the way to success, that is the way great spiritual giants are produced.” — Swami Vivekananda

15. “God gives every bird a worm, but he does not throw it into the nest.” — Swedish Proverb

17. “An Unfailing Success Plan: At each day’s end write down the six most important things to do tomorrow; number them in order of importance, and then do them.” — Anonymous

18. “Success seems to be largely a matter of hanging on after others have let go.” – William Feather

19. “One of the commonest mistakes and one of the costliest is thinking that success is due to some genius, some magic — something or other which we do not possess. Success is generally due to holding on, and failure to letting go. You decide to learn a language, study music, take a course of reading, train yourself physically. Will it be success or failure? It depends upon how much pluck and perseverance that word “decide” contains. The decision that nothing can overrule, the grip that nothing can detach will bring success. Remember the Chinese proverb, “With time and patience, the mulberry leaf becomes satin.” — Maltbie Davenport Babcock

21. “I dread success. To have succeeded is to have finished one’s business on earth, like the male spider, who is killed by the female the moment he has succeeded in courtship. I like a state of continual becoming, with a goal in front and not behind.” — George Bernard Shaw

22. “The real contest is always between what you’ve done and what you’re capable of doing. You measure yourself against yourself and nobody else.” — Geoffrey Gaberino

24. “Success is a state of mind. If you want success, start thinking of yourself as a success.” — Dr. Joyce Brothers

26. “Successful and unsuccessful people do not vary greatly in their abilities. They vary in their desires to reach their potential.” — John Maxwell

27. “You must do the very thing you think you cannot do.” — Eleanor Roosevelt

28. “Always bear in mind that your own resolution to succeed is more important than any other.” – Abraham Lincoln

29. “Success comes before work only in the dictionary.” — Anonymous

30. “Most people give up just when they’re about to achieve success. They quit on the one yard line. They give up at the last minute of the game one foot from a winning touchdown.” – Ross Perot

31. “Success is a science; if you have the conditions, you get the result.” — Oscar Wilde

32. “One reason so few of us achieve what we truly want is that we never direct our focus; we never concentrate our power. Most people dabble their way through life, never deciding to master anything in particular.” — Anthony Robbins

33. “Making your mark on the world is hard. If it were easy, everybody would do it. But it’s not. It takes patience, it takes commitment, and it comes with plenty of failure along the way. The real test is not whether you avoid this failure, because you won’t. It’s whether you let it harden or shame you into inaction, or whether you learn from it; whether you choose to persevere.” – Barack Obama

34. “Opportunity is missed by most people because it is dressed in overalls and looks like work.” – Thomas Edison

35. “You may be disappointed if you fail, but you are doomed if you don’t try.” — Beverly Sills

36. “If one advances confidently in the direction of his dreams, and endeavors to live the life which he has imagined, he will meet with success unexpected in common hours.” — Henry David Thoreau

37. “Do what you can, with what you have, where you are.” — Theodore Roosevelt

38. “If you would hit the mark, you must aim a little above it; Every arrow that flies feels the attraction of earth.”– Henry Wadsworth Longfellow

40. “If you want to be successful, find someone who has achieved the results you want and copy what they do and you’ll achieve the same results.” Anthony Robbins

41. “I believe that being successful means having a balance of success stories across the many areas of your life. You can’t truly be considered successful in your business life if your home life is in shambles.” – Zig Ziglar

42. “Success and failure. We think of them as opposites, but they’re really not. They’re companions – the hero and the sidekick.” — Laurence Shames

43. “There are so many ways to fail but only one way to succeed; NEVER GIVE UP!” — Johni Pangalila

44. “Talent is cheaper than table salt. What separates the talented individual from the successful one is a lot of hard work.” — Stephen King

45. “I must admit that I personally measure success in terms of the contributions an individual makes to her or his fellow human beings.” – Margaret Mead

49. “To follow, without halt, one aim: There’s the secret of success.” – Anna Pavlona

50. “There is only one success – to be able to spend your life in your own way.” – Christopher Morley

52. “Success usually comes to those who are too busy to be looking for it.” — Henry David Thoreau

54. “Keep steadily before you the fact that all true success depends at last upon yourself.” — Theodore T. Hunger

55. “Success is the sum of small efforts, repeated day in and day out.” – Robert Collier

56. “Some people dream of success… while others wake up and work hard at it.” — Author Unknown

58. “For true success ask yourself these four questions: Why? Why not? Why not me? Why not now?” — James Allen

60. “Success in its highest and noblest form calls for peace of mind and enjoyment and happiness which come only to the man who has found the work that he likes best.” – Napoleon Hill

62. “There are no secrets to success. It is the result of preparation, hard work, and learning from failure.” – Colin Powell

63. “I find my greatest pleasure, and so my reward, in the work that precedes what the world calls success.” – Thomas Edison

64. “You know you are on the road to success if you would do your job, and not be paid for it.” – Oprah Winfrey

65. “Your chances of success in any undertaking can always be measured by your belief in yourself.” — Robert Collier

66. “You will be a failure, until you impress the subconscious with the conviction you are a success. This is done by making an affirmation which clicks.” – Florence Scovel Shinn

67. “Success is a journey, not a destination. The doing is often more important than the outcome.” – Arthur Ashe

68. “A little more persistence, a little more effort, and what seemed hopeless failure may turn to glorious success.” – Elbert Hubbard

69. “We must be the epitome-the embodiment-of success. We must radiate success before it will come to us. We must first become mentally, from an attitude standpoint, the people we wish to become.” — George Herbert Allen

70. “When I was younger, I thought that the key to success was just hard work. But the real foundation is faith. Faith — the idea that ‘I can do it’ — is the opposite of fear (‘What if I fail?’). And faith creates motivation which in turn leads to commitment, hard work, preparation … and eventually success.”– Howard Twilley

71. “Give the world the best you have, and the best will come to you.” — Madeline Bridge

72. “Every achiever I have ever met says, ‘My life turned around when I began to believe in me.’” – Robert Schuller

Take these success quotes to heart, and start living your best life today.

Next post: Rule of Adulthood: You Have to Rescue Yourself