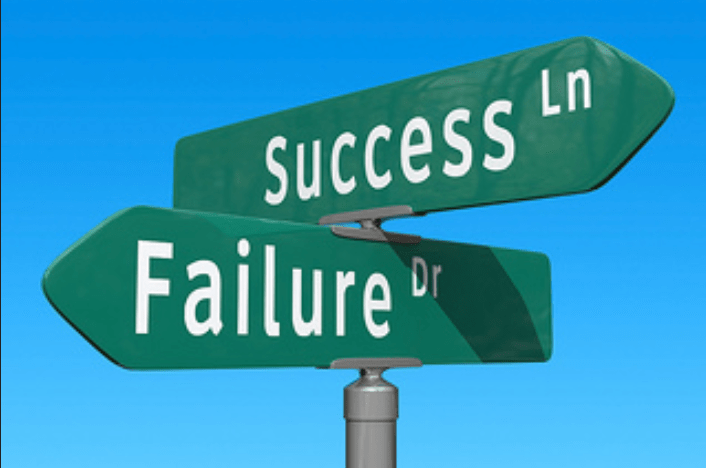 Robert F. Kennedy once said that “Only those who dare to fail greatly can ever achieve greatly.”

When any of us fail at something, it’s hard to keep things in perspective. On the other hand, it’s easy to fall prey to catastrophic thinking along the following lines:

That’s where stories about other people who have failed, and then went on to win big-time, come in. They help us to think the following:

In the spirit of looking for ways to turn failure into a springboard to success, below you’ll find 16 wildly successful people who failed before becoming superstars.

Astaire went on to star in several successful musical comedy films with Ginger Rogers from 1933 to 1949, and he continued to do well even after the duo split up. “Top Hat”, along with “Swing Time”, are his most famous films. They’re still being watched today.

2. Elvis Presley. Elvis Presley, one of the most iconic entertainers of the 20th century, drove a truck after graduating from high school. At the same time, he auditioned whenever he could. After auditioning as a vocalist for a popular Memphis band, he was told: “You ain’t goin’ nowhere, son. You ought to go back to drivin’ a truck.”

Always an aggressive, go-getting type, she acquired the film rights to “The Philadelphia Story”, gave herself the lead female role, and staged her comeback. The film was a big hit. Hepburn had taken control of her career and it paid off big. She went from failure to success.

In the early 1950s, García Márquez sent his novella to the most important publishing house in Latin America at the time: Editorial Losada in Argentina. The editor, Guillermo de Torre, rejected it and sent it back with a note informing the young García Márquez that he didn’t have a future as a writer, and he should look for a different profession.

5. Dr. Seuss. Theodor Geisel—known as Dr. Seuss—had his first book, “And To Think That I Saw It On Mulberry Street,” initially rejected by over 20 publishers. Finally, Vanguard Press agreed to publish the book. Today, Dr. Seuss’ children’s books are classics – most of us will remember having read “The Hat in the Hat” and “Green Eggs and Ham” when we were kids.

6. Walt Disney. When Walt Disney was a young man, he was fired by a newspaper editor because “he lacked imagination and had no good ideas.”

Disney’s next failure came in 1922 when he started his first film company. Along with a partner, he bought a used camera and made short advertising films and cartoons under the studio name Laugh-O-Gram. The company went bankrupt in 1923.

Later, Disney was told that Mickey Mouse—who has become one of the world’s most beloved animated characters–was a bad idea because women were afraid of mice. When visiting one of the many Disney amusement parks that exist today around the world, or watching the Disney movies, it’s hard to believe how many times Walt Disney failed before succeeding.

7. Winston Churchill. Winston Churchill was Britain’s lord of admiralty (secretary of the navy) during World War I. He made the decision to attack Turkey at Gallipoli on the Dardanelles coast, despite  being advised by people more knowledgeable than he was in warfare that it was a bad idea.

The battle lasted eight-and-a-half-months; it resulted in 250,000 casualties for the Allies; and the Allies withdrew in disgrace. Britain was humiliated.

Churchill was dismissed from his cabinet position. In an interview given many years later, his wife explained that after the Gallipoli debacle, Churchill had almost died of grief.

Then, during World War II, Churchill saved Britain from the Nazis. However, in another surprising failure for Churchill, British voters ousted him from office just two months after Germany’s surrender in 1945.

Nonetheless, in 1951, 77-year-old Churchill became prime minister for the second time. He stayed in the position until he retired in 1955. The “British Bulldog” who had so many ups and downs in his life, ended up on top.

8. Larry King. For twenty-five years, from 1985 to 2010, Larry King hosted the nightly interview television program Larry King Live on CNN, a show that had over one million nightly viewers. However, in 1971 he was arrested for grand larceny.

King didn’t go to jail because the statute of limitations had run out. The man who accused him, Louis E. Wolfson, succeeded in getting King fired from his job at the Miami TV station WTVY, by claiming that he was a ‘menace to the public’.

The scandal almost destroyed King’s career. It took him four years to get his life back on track.

9. Colonel Sanders. Harland Sanders—who went on to become known as Colonel Sanders—was in his sixties when, due to unforeseen circumstances, he found himself penniless. He hopped into his car and started driving around the US, visiting restaurants and trying to franchise his chicken business.

In exchange for his “secret” chicken recipe—with eleven herbs and spices—he wanted a nickel for every chicken sold. He was rejected over 1000 times until, finally, he sold his first franchise to Pete Harman of Salt Lake City. Things picked up from there.

In 1964, Sanders sold the franchising operation for $2 million. Today, that operation is KFC—a multibillion-dollar international company.

10. Sidney Poitier. Sidney Poitier grew up in poverty in the Bahamas. When he first auditioned for the American Negro Theatre, he spoke in a heavy Caribbean accent and botched his lines. Poitier was told by the casting director:

“Why don’t you stop wasting people’s time and go out and become a dishwasher or something?”

Poitier worked on his craft and went on to win an Academy Award for best actor.

11. Bill Gates. In 1975 Bill Gates dropped out of Harvard. He started a business with Paul Allen called Traf-O-Data. It flopped. Undeterred by their failure, Gates and Allen tried their hand at business again and created Microsoft.

12. Milton Snavely Hershey. Miltson S. Hershey–founder of Hershey’s chocolate–started four candy companies that failed, and he filed for bankruptcy, before starting what is now Hershey’s Foods Corporation. His fifth attempt was clearly successful – Hershey’s Kisses are known the world over.

13. William McKinley. McKinley—the 25th President of the United States–went bankrupt while serving as Ohio’s governor in 1893. He was $130,000 in the red before eventually straightening out with the help of friends. He won the White House after having gone through this experience.

14. H.J. Heinz. H.J. Heinz started the partnership of Heinz and Noble with his friend, Clarence Noble, when he was twenty-five years old. They produced horseradish and other bottled products. However, the market was soon flooded with horseradish, and the company went bankrupt.

Heinz plunged back into the bottled food business a year later. Of course, we’re all familiar with the Heinz Company, which today manufactures thousands of food products in plants on six continents.

15. J.K. Rowling. J.K. Rowling is the first billionaire author, thanks to the Harry Potter books and franchise. It’s hard to believe she once lived on welfare and was so miserable she contemplated suicide. Here’s a quote from her 2008 commencement speech at Harvard:

“An exceptionally short-lived marriage had imploded, and I was jobless, a lone parent, and as poor as it is possible to be in modern Britain, without being homeless … By every usual standard, I was the biggest failure I knew.”

It was not until he opened his Macy’s in New York City that he succeeded. Today, Macy’s covers an entire city block and is a must-see NYC landmark.

Aren’t you feeling better about your failures now? I know I am. Live your best life by recognizing that failure is just a stepping stone to success.