The Reason Why You Procrastinate (It’s Not What You Think) 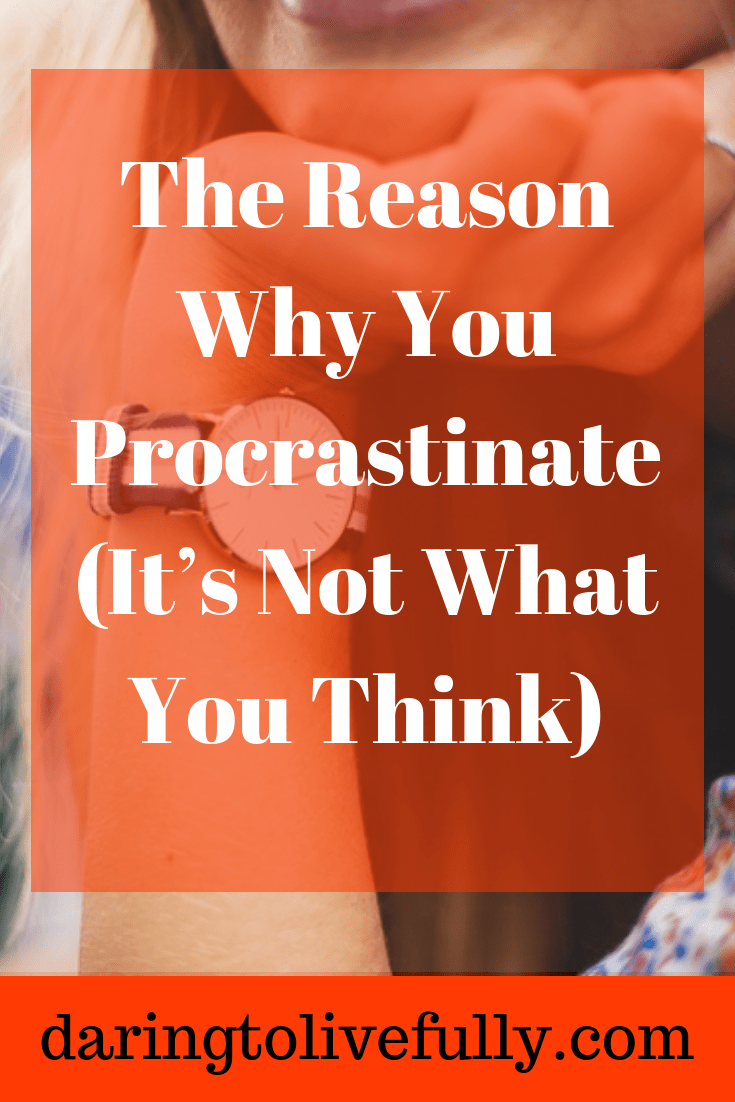 Procrastinating is delaying the start or completion of tasks that are important for your well-being. Here are some examples:

If you’ve found yourself in any of the situations above, you may be asking yourself why you procrastinate. Is it poor time management? Were you cursed at birth by a wicked fairy godmother? Do you secretly hate yourself? Did you inherit some sort of procrastination gene? Are you lazy?

Allow me to end the suspense: the reason you procrastinate is because of poor mood management. Aha!

Joseph Ferrari, a professor of psychology at DePaul University, explains that procrastination happens for two reasons:

That is, we say things like the following to ourselves:

Now that you know why you procrastinate, what can you do to fix your procrastination problem? I’m going to give you some techniques you can use in this post.

Below you’ll find seven ways to control your mood so that you can stop procrastinating and get started with those important projects and tasks that you keep putting off.

If the mere thought of getting started on a task makes you wince—because it’s boring, difficult, or something you’ve never done before—it’s highly unlikely you’ll be in the mood to get started with it. Once you’ve framed something as “snooze-inducing”, the “task from hell”, or the “requires-genius-level-IQ” project, you can be sure you’ll be in full-on procrastination mode.

When you can’t get yourself to work on a task because of the way in which you’ve framed it, the solution is to reframe it. Be curious about the task. Ask yourself questions like the following:

You Can Act Regardless of Your Mood

A mature person knows that if something needs to be done, they’ll get to it, even if they don’t feel like it. I’m a runner, and a weightlifter. Both activities involve putting up with some discomfort, and there are days when I simply don’t feel like doing them. But I do them, regardless of whether I feel like it.

I do it because I’m an adult, and I’m in charge.

Dr. Tim Pychyl, professor of psychology and member of the Procrastination Research Group at Carleton University in Ottawa, recommends that–to get started on a task that you’re procrastinating on–you do the following:

Deceive yourself?! Yes. When it’s time to get started on a task, consider the next action, but just as if it were a possibility. You can tell yourself things like the following:

Dr. Pychyl states that motivation follows action. Once you’ve deceived yourself into taking some action that’s related to the task that you need to work on, however small that action may be, it’s much easier to just keep going.

Suppose you’re about to get started on a complicated task, and you feel some anxiety as a result. You know it’s going to take a lot of focused effort. To lessen this anxiety, you feel yourself clicking over to Twitter to see what your online friends are up to. That’s when you should stop yourself and time travel.

Think of yourself an hour from now. There are two possible scenarios you’ll find yourself in:

How do you feel when you think of Scenario One? You probably feel pretty good about yourself.

Use the Science of Habits

We now know that habits are repeated behaviors that consist of three parts:

Here’s an example of how to stop procrastinating when it comes to meditating by turning it into a habit:

Since habits are something you do pretty much on automatic, whether you’re “in the mood” is a question you don’t even ask yourself. The trigger sets off the action, you perform the action, and then you reward yourself.

One of the reasons that people procrastinate is because they fall into a negative loop, which looks like the following:

Get yourself out of this loop by showing yourself self-compassion. Once you realize that you’ve wasted 45 minutes, instead of berating yourself, forgive yourself. Accept that you messed up, acknowledge that you failed to self-regulate—which happens–, and resolve to do better moving forward.

Then, give yourself a re-do. You didn’t get to work on the task 45 minutes ago like you should have, but you’re going to get started now.

There’s nothing worse than trying to get yourself to work on a task when the reward for that task is far off in the future. The solution is to look for ways to reward yourself as soon as possible by breaking the task down into small parts and rewarding yourself after each of the parts is achieved.

Let’s take a look at the task of writing a blog post as an illustration. My posts tend to be on the long side—this one is about 2000 words long—and I do a lot of research for them. This means that they take a long time to write.

Often, when I’m about to start writing an article, I think to myself something like the following: “Oh, no. This is going to take forever.” That immediately makes me want to go do something else.

What I do at this point is take out my blogging checklist which details every single step that I need to take in order to write a blog post. Then, I simply start going down the list. Every time I complete one of the items on the checklist, I think to myself: “Check!”. Then I do one of the following:

Rewarding yourself is a great way to regulate your mood.

I hope this post helps you to knock out an important task that you’ve been procrastinating on. If you need more help overcoming procrastination, get my eBook, “Make It Happen! A Workbook for Overcoming Procrastination and Getting the Right Things Done”.

Live your best life by taking charge of your mood so you can overcome procrastination.

Previous post: 12 Solo Date Ideas – Fun Things To Do On Your Own