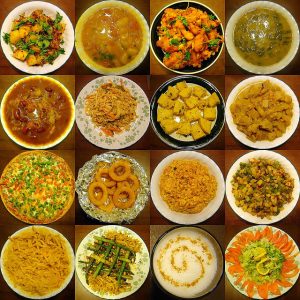 One category of items that should definitely be on your bucket list is the food and drinks you would like to try before you die. After all, eating is one of life’s greatest pleasures. In addition, one of the best ways to experience the culture of a country is through its food. Finally, there’s no better way to spend time with others than to share a meal.

The 16 ideas below were taken from my eBook, “Idea Book – 300 Ideas For Your Food Bucket List”. 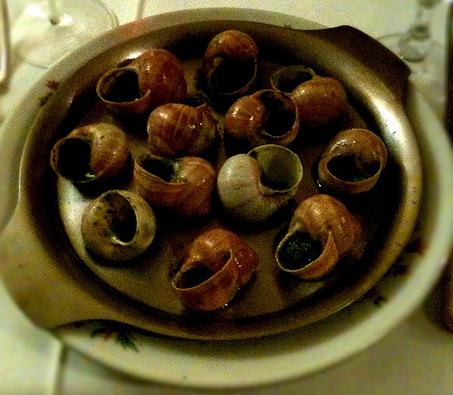 1. Escargot. Escargot is a dish of cooked land snails associated with French cuisine.  They’re usually served as an appetizer. The most common way to prepare escargot is to cook them with butter, garlic, and parsley.

Escargot is served in a snail dish with snail tongs and a slender two-pronged snail fork. Use the tongs to grip and hold the the shell in place with one hand. Then, with your other hand, use the snail fork to pull out the meat. 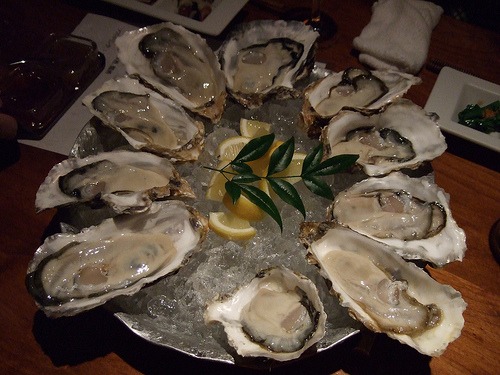 2. Raw Oysters. Oysters range from very salty to mild, and from firm to soft. It depends on where they come from. They can be eaten as is–without adding a thing–, or you can add lemon, cocktail sauce, or even a few drops of hot sauce.

Take the oyster fork and make sure that the oyster is detached from the shell. Then put down your fork, pick up the shell, and slurp down the oyster from the wide end. Chew it once or twice before you swallow it. 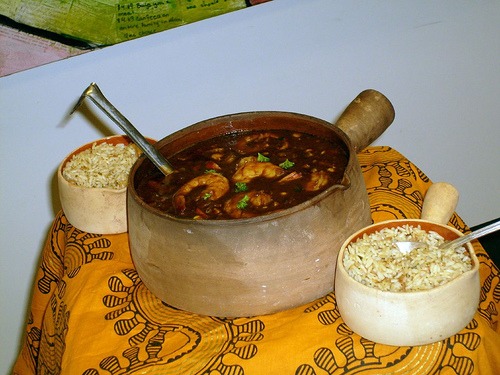 3. Gumbo. Gumbo is a type of spicy stew typical of the state of Louisiana in the US. It originated with the Louisiana Creole people in the 18th century. 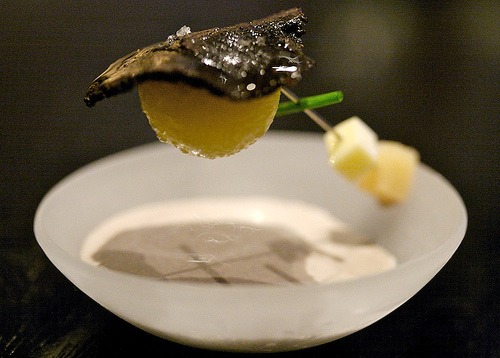 4. Black Truffle: Black truffles are mushrooms that grow underground and must be hunted (by pigs or trained dogs). They grow on the roots of truffle oaks and, to date, no one has been able to cultivate them. 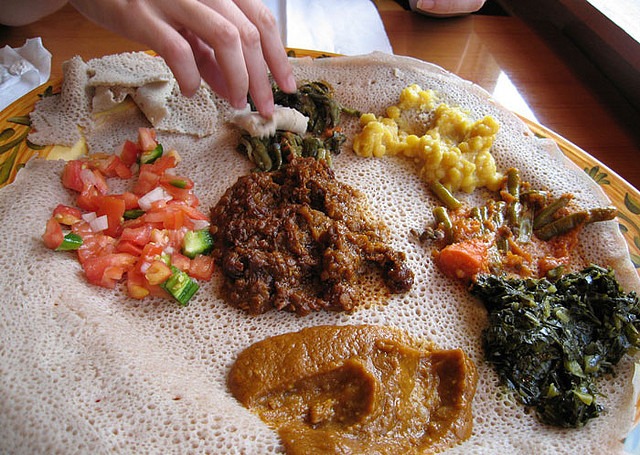 5. Ethiopian Cuisine: Ethiopian cuisine characteristically consists of spicy vegetables, pastes, and meat dishes served atop an injera–a large sourdough flatbread which is about 20 inches in diameter. Ethiopians eat with their right hands, using pieces of injera to pick up bites of food. 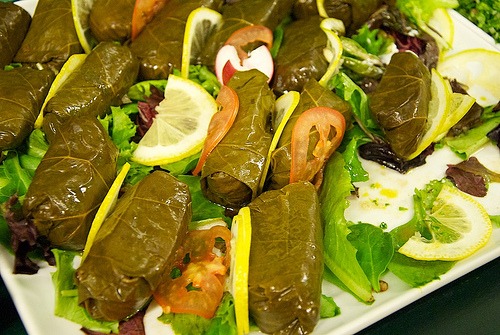 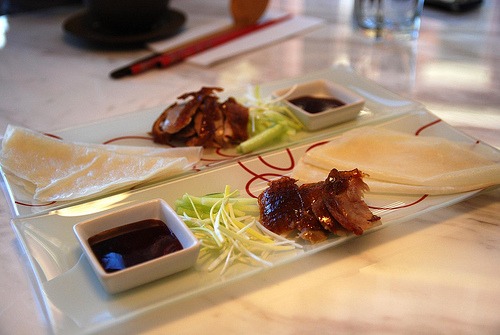 7. Peking Duck: Peking duck is a delicacy from Beijing, China. Ducks are bred specifically for this dish. One of the most important aspects of Peking Duck is the skin, which has to be thin, crispy, and deep brown.

The duck is served with thin pancakes. To eat, spread a little hoisin sauce on each pancake, add some duck and sprinkle with shredded spring onions. 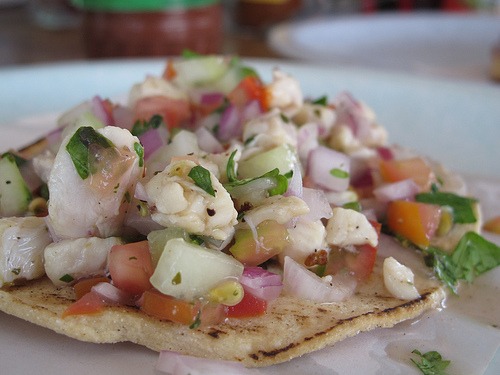 8. Ceviche. Ceviche is raw fish marinated in a citrus-based mixture. Sliced onions, chili, salt and pepper are added to the fish. Corvina or Cebo (sea bass) is the fish traditionally used. It’s a popular dish in Central and South America. 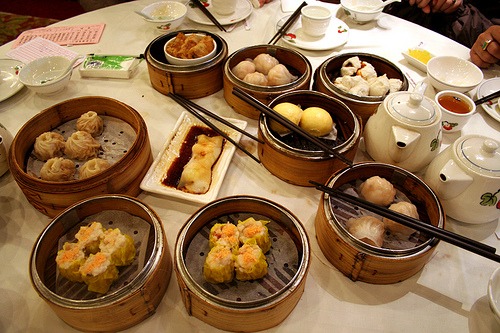 9. Dim Sum: Dim Sum is a Chinese dish that involves small individual portions of food, which are usually served in a small steamer basket or on a small plate. 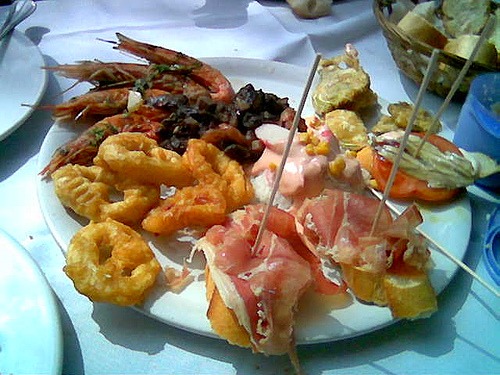 10. Tapas: Tapas are a wide variety of Spanish appetizers, canapés, or finger food. They are served in bars and cafés in Spain in miniature clay dishes. These appetizers can be olives, meatballs, battered squid, sausage, and so on.

When in Spain, hop from tapas bar to tapas bar, enjoying glasses of wine and these tiny snacks. 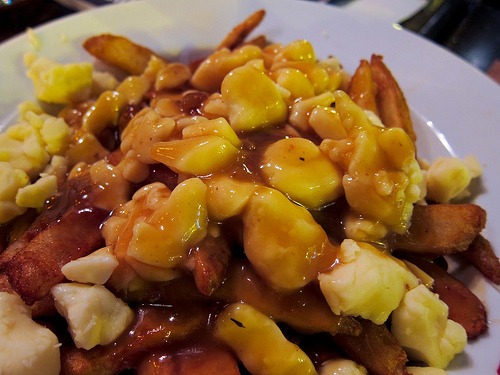 11. Poutine. Eat poutine in Quebec, Canada. Poutine can roughly be translated as “mushy mess”. It’s a dish that consists of French fries, topped with brown gravy and curd cheese. Poutine is so popular in Canada that even McDonald’s has added it to its menu. 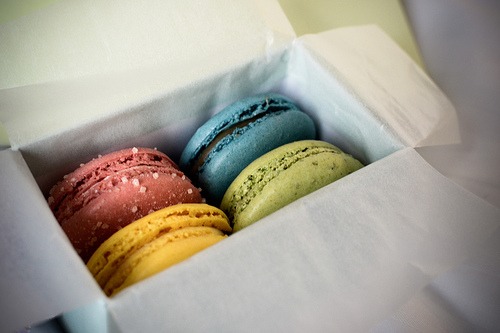 12. Macarons: Macarons are baked confections made from ground almonds—although other nuts are sometimes used–, egg whites, and sugar. Food coloring is added.

Each macaron is commonly filled with ganache, buttercream or jam filling sandwiched between two biscuits. Although macarons are available worldwide, the best place to have them is at Ladurée, the French luxury bakery located at the Avenue des Champs-Élysées in Paris, France. 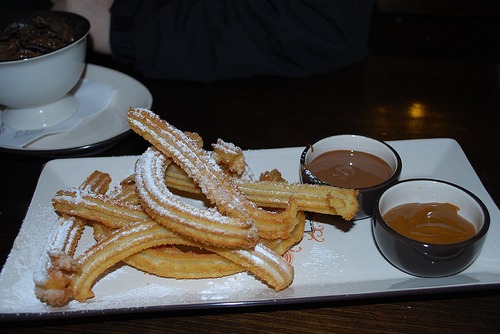 13. Churros. Churros are fried pastries sprinkled with sugar that originated in Spain and are very popular in Latin American countries. Churros are sometimes filled with “cajeta”—caramel—and they can be dipped in a chocolate sauce. 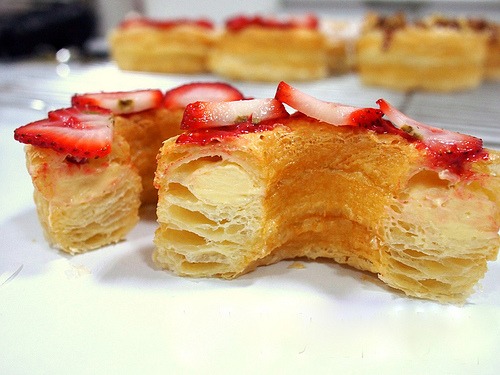 14. Cronut. The Cronut is a croissant-doughnut hybrid created by Chef Dominique Ansel in his New York City pastry shop. It has the shape of a doughnut, but the dough is similar to the dough of a croissant. You’ll have to stand in a long line  at the legendary bakery in order to taste them. 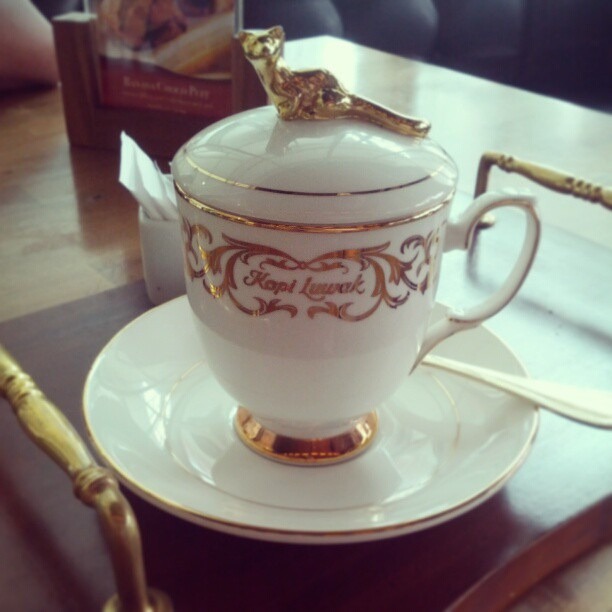 15. Kopi Luwak or Civet Coffee. Civet coffee refers to the seeds of coffee berries once they have been eaten and defecated by the Asian palm civet. These animals live in the plantations of Java, Sumatra, and Sulawesi. They eat only the ripest coffee cherries. Unable to digest the coffee beans, these are defecated and picked up by locals to make coffee. Kopi Luwak is the most expensive coffee on earth. 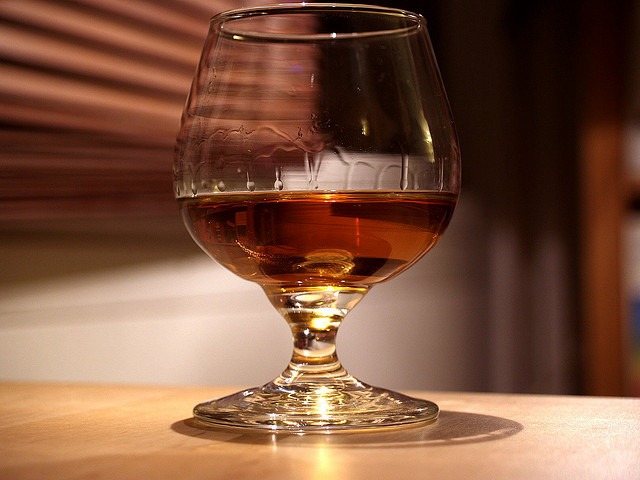 16. Cognac. While all Cognac is Brandy—a spirit made by distilling wine, and then aging the resulting eau-de-vie in wood barrels—not all Brandy is Cognac. Cognac can only originate from the town of Cognac, France, and its six surrounding viticultural areas.

It’s unique because of its renowned quality, which is in turn a result of centuries-old techniques that have preserved the identity of the spirit. Even the type of wood used for the storage barrels is predetermined and controlled. In addition, each Cognac house has preserved its family secrets for generations. 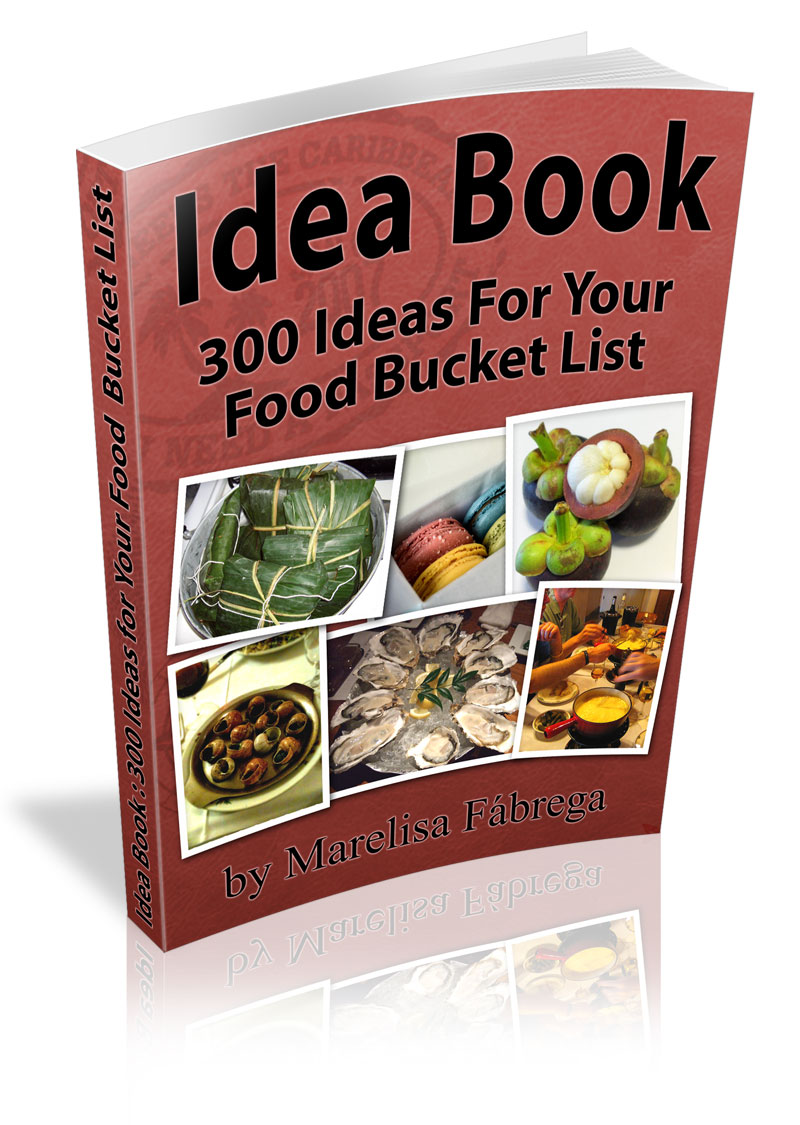 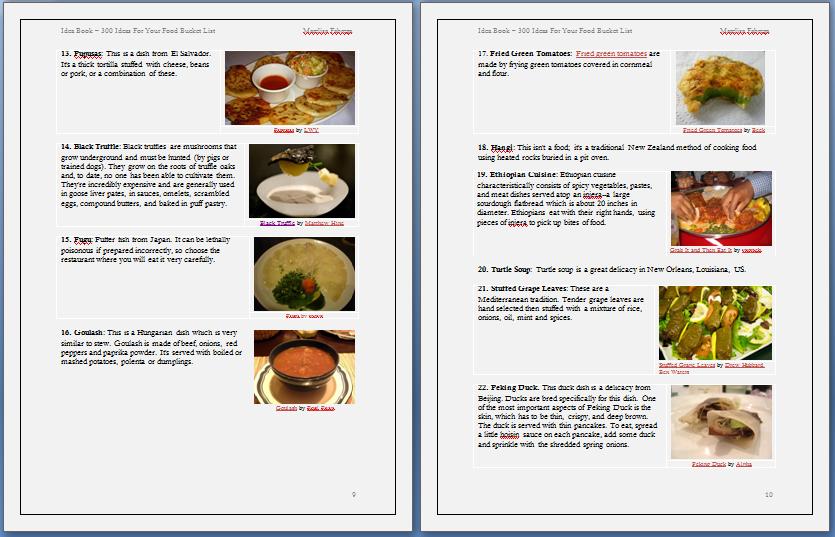 Get “Idea Book -300 Ideas For Your Food Bucket List” for just $9.95. It’s a digital product, so you’ll receive it immediately upon purchase. 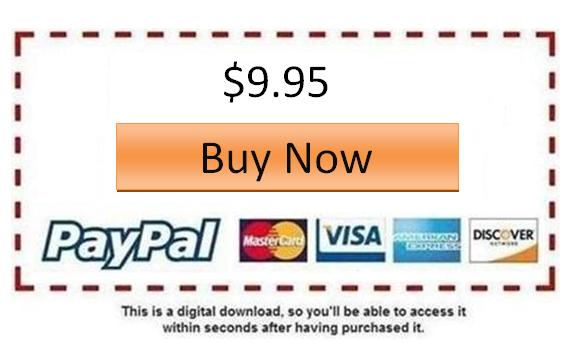 Next post: 15 Ways to Salvage Your Resolutions in the Last 100 Days of the Year

Previous post: 50 Goal Quotes That Will Inspire and Motivate You