A 12-Step Process for Overcoming Procrastination Once and For All 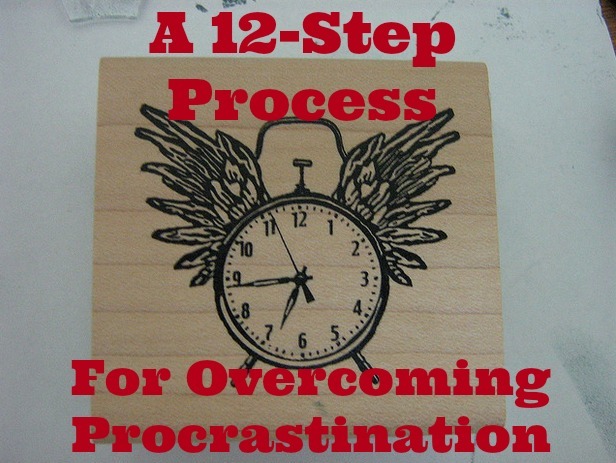 Does procrastination have a stranglehold on your dreams? If so, use this 12-step process to free yourself, once and for all. But, you kept putting these things off. In other words, you allowed procrastination to get the better of you. So, you still can’t play a musical instrument, you can’t travel as much as you’d like to because you don’t have the money to do so, and someone else got the promotion you wanted. The good news is that there are ways to fight back and beat procrastination. In this post you’ll discover a 12-step process for overcoming procrastination, once and for all.

I’m going to use my own experience in overcoming procrastination in order to take up weight lifting as an illustration throughout this post.

Although I’ve now been strength training for a little over a month, it was something that I procrastinated on for a while. However, since I’m a procrastination expert—I’ve even written an eBook on overcoming procrastination—I decided to follow my own advice in order to get myself to the gym.

Here’s what to do:

1. Eliminate Obstacles to Getting Started. One of the main reasons why people procrastinate is because there are obstacles standing between them and the goal that they wish that they could get themselves to start working on. And the bigger the obstacle, the more likely it is to lead to procrastination.

Those of you who read this blog regularly know that I work from a club that I belong to. I go Monday through Friday, and sit in a cabana-like structure that’s next to the pool. The club has a separate building that has a gym.

At the beginning of the year, I started telling myself that I wanted to take up weight lifting. All I had to do was to start going to the gym in the building next door. However, I couldn’t get myself to do it. I was procrastinating; big time.

Finally, I asked myself what was the biggest obstacle that was keeping me from going to the gym. I concluded that it was having to change into exercise clothes. Going to the gym meant that I would have to take a bag to the club with my gym clothes in it, change in the locker room, and then change back once I finished exercising. That was just too much of a hassle.

I began brainstorming ways to overcome this obstacle. That’s how I found a solution to the problem I was facing.

I went on Amazon and found some Champion workout Capri leggings, along with Champion tees that I could wear both to sit by the pool and work, and to exercise at the gym. I ordered several of the leggings in black, and several tees in different colors. When they arrived I started wearing them to the club every day.

The biggest obstacle to going to the gym had been overcome. I was now dressed in a way that, at any moment, I could simply get up and go to the gym.

2. Increase Your Motivation. I decided that in order to get myself to take action on my goal of adding weight lifting to my exercise regime I needed to increase my motivation. After all, the less motivated you are to do something, the more likely it is that you’ll procrastinate on getting it done.

I did some research on the benefits of weight lifting, and came up with the following:

With this information I felt more motivated to get to the gym, making it much more likely that I would do so.

3. Make a Fresh Start. Another major reason why people procrastinate is because they can’t get themselves to say, “OK, this is the day I’m going to start”. The best way to overcome this hurdle is to identify a fresh start. As I wrote in my post “Birthday Bucket List: 25 Things to Do Before Your Next Birthday”, “fresh starts” are temporal landmarks.

Tackling a goal during a “fresh start” increases people’s chances of getting started on working toward achieving that goal. So, identify a fresh start and mark it down as the day on which you’re going to start working on your goal. I decided to make my fresh start on a Monday, exactly three weeks before my birthday.

4. Take Tiny Steps Toward Your Goal. My “fresh start” Monday arrived. I was sitting next to the pool in my exercise clothes, typing away at my computer, making great progress on my latest eBook. I kept telling myself that once I had finished writing the next paragraph, I would get up and go to the gym. Nonetheless, I couldn’t get myself to do it.

Finally, I managed to talk myself into taking one tiny step toward my goal of lifting weights. I had never been to the building that the gym is in, and I wasn’t sure how to get there. Therefore, I called over a club staff member and asked him for directions. He pointed out the path that I had to follow, and I thanked him. I decided that this tiny step was enough for that day.

Here’s how I finally got to the gym:

I had made it to the gym! And I got there by taking tiny steps.

5. Identify Specifically What Action You’re Going to Take. Not knowing what to do is another reason for procrastinating. After all, if you don’t know what to do, how can you be expected to do it?

Once I started going to the gym I was doing some cardio, but I still wasn’t lifting weights, because I didn’t know what to do. Therefore, I once again went on Amazon (it’s amazing how many problems you can solve by going on Amazon).

I did some research on the best books on how to lift weights, and I ended up buying The Women’s Health Big Book of Exercises. It contains lots of exercises, with illustrations, and clear instructions on how to carry out each one.

6. Don’t Get Stuck at the Preparation Stage. Once I received “The Women’s Health Big Book of Exercises”, I looked through it. Then I started thinking the following:

I was clearly in danger of getting stuck at the preparation phase. Endlessly preparing, instead of taking action, is procrastination in disguise. You think that you’re working on your goal—after all, you’re preparing—but you’re really not.

The best thing that I could do to learn how to weight lift was to take the book to the gym and try out the exercises. After all, the most effective approach is to learn by doing, instead of planning and thinking about doing. I made the decision to take action.

7. Chunk It Down. “Lift Weights” was still too big of a goal at this point. The book that I got contains 619 exercises and hundreds of workouts. I felt overwhelmed, to say the least. Therefore, I decided to chunk it down into manageable pieces. Here’s how I chunked it down:

And, there we go. I had chunks I could work with. (I’ve since modified this routine, but this is the routine that got me started.)

8. Make Time For Your Goal. Stop telling yourself, “I don’t have time to work on my goals”. If a goal is a priority for you, you have to make time for it. The most obvious way to do this is to eliminate, or cut back, on something you’re already doing.

By this doing I freed up three hours a week, which I could then use to lift weights at the gym.

10. Overcoming Fear and Self-Consciousness. The next obstacle I had to overcome was mental. The people lifting weights at the gym—mostly men—all seemed to know exactly what they were doing.

In the meantime, I was going to walk in–with my book–, sit down on one of the exercise benches, and clumsily leaf through the pages looking at the exercises, reading carefully how to do each one. I was going to look like an idiot.

And what if I did the exercises wrong? What if someone corrected me? Then I’d be standing there, with everyone looking at me, while I was told to bend my knees and to stop rocking my upper torso back and forth (this actually did happen to me).

I overcame my fear of making a fool of myself at the gym, as well as my self-consciousness, by feeling compassion for myself. Studies have shown that there’s a correlation between self-compassion and procrastination. The less self-compassion you have, the more likely you are to procrastinate.

Therefore, I practiced the following self-talk:

11. Start Small. I’ve already said that you should take tiny steps toward your goal, as well as chunk it down, in order to make sure that you stop procrastinating and that you get to work on achieving your goal. In addition, you have to start small. Are you noticing a theme?

Getting too ambitious when you first start working on a goal will almost guarantee that you’ll drag your feet, instead of doing what needs to be done. In order to beat procrastination, you have to think small.

How do you start small when it comes to weight training? You start with really small weights. I started with the five pound dumbbells (and they were yellow, not pink, thank you very much).

Here are some more examples of starting small:

As I said in one of the previous points, the activity that I substituted with weight lifting was walking. It’s a lot easier to walk than it is to lift weights. That’s particularly true when you’re pushing yourself to lift weights that make you feel the burn.

I can guarantee that the 12-step process that I explained above works, because I applied it and managed to defeat procrastination and get to work on my goal of lifting weights. What important goal are you going to start working on by applying this process?

Live your best life by overcoming procrastination and getting to work on your goals.