65 Procrastination Quotes That Will Shift You Into Action-Mode 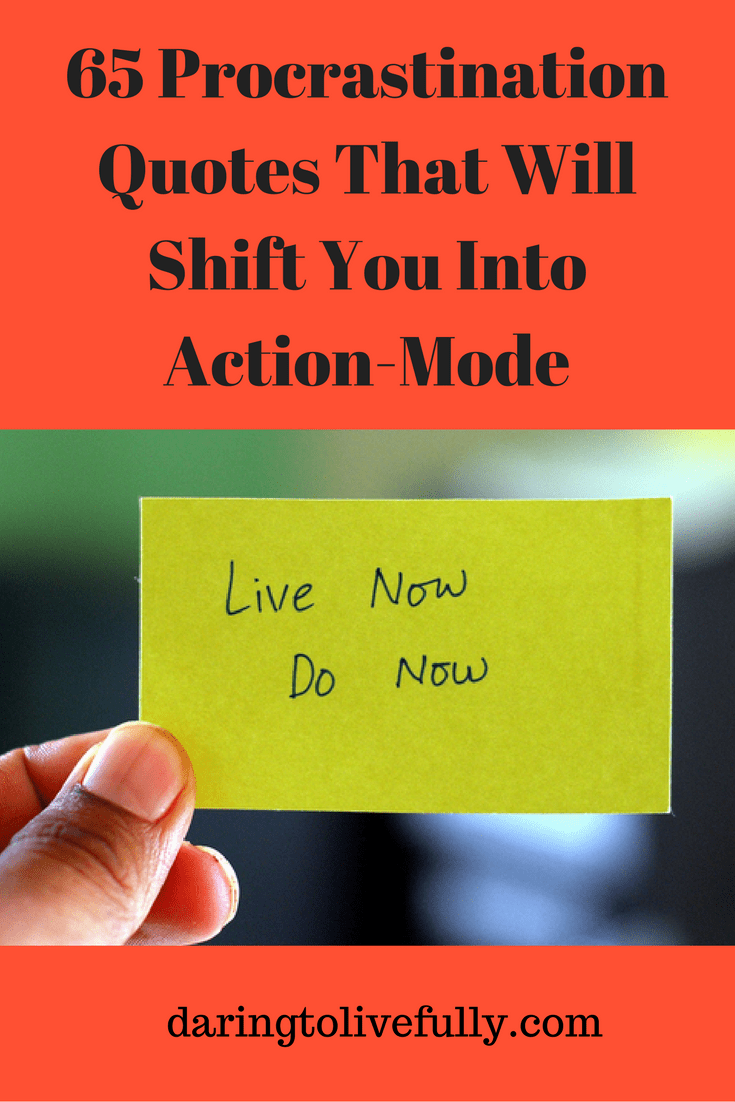 Procrastination is the silent dream killer.

Reading procrastination quotes can be just the wake-up call that you need to get going on that important project you’ve been putting off, make that phone call that you’ve been avoiding, or get started moving in the direction of your dreams.

Go over the 65 procrastination quotes below. Hopefully they’ll provide the motivation that you need to shift from procrastination-purgatory into action-mode, and get going on your important tasks and projects.

1. “Nothing is so fatiguing as the eternal hanging on of an uncompleted task.” ~ William James

2. “You may delay, but time will not.” ~ Benjamin Franklin

3. “To think too long about doing a thing often becomes its undoing.” ~ Eva Young

5. “If you want to make an easy job seem mighty hard, just keep putting off doing it.” ~ Olin Miller

6. “The best way to get something done is to begin.” ~ Author Unknown

7. “A year from now you may wish you had started today.” ~ Karen Lamb

8. “Procrastination is the thief of time.” ~ Edward Young

9. “Procrastination usually results in sorrowful regret. Today’s duties put off until tomorrow give us a double burden to bear; the best way is to do them in their proper time.” ~ Ida Scott Taylor

10. “Following-through is the only thing that separates dreamers from people that accomplish great things”. ~ Gene Hayden

12. “If you put off everything till you’re sure of it, you’ll never get anything done.” ~ Norman Vincent Peale

13. “If you want to make an easy job seem mighty hard, just keep putting off doing it.” ~ Olin Miller

14. “Begin to weave and God will give you the thread.” ~ German Proverb

15. “Often greater risk is involved in postponement than in making a wrong decision.” ~ Harry A. Hopf

16. “The habit of always putting off an experience until you can afford it, or until the time is right, or until you know how to do it is one of the greatest burglars of joy. Be deliberate, but once you’ve made up your mind -jump in.” ~ Charles R. Swindoll

17. “Getting an idea should be like sitting on a pin; it should make you jump up and do something. ~ E. L. Simpson

18. “There is nothing so fatal to character as half finished tasks.” ~ David Lloyd George

20. “Doing just a little bit during the time we have available puts you that much further ahead than if you took no action at all.” ~Byron Pulsifer

23. “When there is a hill to climb, don’t think that waiting will make it smaller.” ~Author Unknown

24. “To do anything in this world worth doing, we must not stand back shivering and thinking of the cold and danger, but jump in and scramble through as well as we can.” ~ Syndey Smith

26. “So what do we do? Anything. Something. So long as we just don’t sit there. If we screw it up, start over. Try something else. If we wait until we’ve satisfied all the uncertainties, it may be too late.” ~ Lee Iacocca

27. “This one makes a net, this one stands and wishes. Would you like to make a bet which one gets the fishes.” ~ Chinese Rhyme

29. “A primary reason people don’t do new things is because they want to do them perfectly – first time. It’s completely irrational, impractical, not workable – and yet, it’s how most people run their lives. It’s called The Perfection Syndrome.” ~ John-Roger and Peter McWlliams

31. “Procrastination is the grave in which opportunity is buried.” ~ Author Unknown

32. “We shall never have more time. We have, and have always had, all the time there is. No object is served in waiting until next week or even until tomorrow. Keep going day in and day out. Concentrate on something useful. Having decided to achieve a task, achieve it at all costs.” ~ Arnold Bennett

34. “Things may come to those who wait, but only the things left by those who hustle.” ~ Abraham Lincoln

37. “All things come to those who wait, but when they come they’re out of date.” ~ Anonymous

38. “Work expands so as to fill the time available for its completion.” ~ C. Northcote Parkinson

39. “The only difference between success and failure is the ability to take action.” ~ Alexandre Graham Bell

40. “The search for the perfect venture can turn into procrastination. Your idea may or may not have merit. The key is to get started.” ~ Unknown

41. “It was my fear of failure that first kept me from attempting the master work. Now, I’m beginning what I could have started ten years ago. But I’m happy at least that I didn’t wait twenty years.” ~ Paulo Coelho

42. “The really happy people are those who have broken the chains of procrastination, those who find satisfaction in doing the job at hand. They’re full of eagerness, zest, productivity. You can be, too.” ~ Norman Vincent Peale

43. “You cannot plough a field by turning it over in your mind.” ~ Author Unknown

44. “I don’t wait for moods. You accomplish nothing if you do that. Your mind must know it has got to get down to work.” ~ Pearl S. Buck

45. “Much of the stress that people feel doesn’t come from having too much to do. It comes from not finishing what they started.” ~ David Allen

46. “If you believe you can accomplish everything by “cramming” at the eleventh hour, by all means, don’t lift a finger now. But you may think twice about beginning to build your ark once it has already started raining.” ~ Max Brooks

47. “Somebody should tell us, right at the start of our lives, that we are dying. Then we might live life to the limit, every minute of every day. Do it! I say. Whatever you want to do, do it now! There are only so many tomorrows.” ~ Michael Landon

48. “He who every morning plans the transactions of that day and follows that plan carries a thread that will guide him through the labyrinth of the most busy life.” ~ Victor Hugo

49. “Do you know what happens when you give a procrastinator a good idea? Nothing!” ~Donald Gardner

50. “The certainty that life cannot be long, and the probability that it will be much shorter than nature allows, ought to awaken every man to the active prosecution of whatever he is desirous to perform. It is true, that no diligence can ascertain success; death may intercept the swiftest career; but he who is cut off in the execution of an honest undertaking has at least the honour of falling in his rank, and has fought the battle, though he missed the victory.” ~ Samuel Johnson

51. “Procrastination is the fear of success. People procrastinate because they are afraid of the success that they know will result if they move ahead now. Because success is heavy, carries responsibility with it, it is much easier to procrastinate and live on the “someday I’ll” philosophy”. ~ Denis Waitley

52. “Procrastination is like a credit card: it’s a lot of fun until you get the bill.” ~ Christopher Parker

54. “Don’t procrastinate. Putting off an unpleasant task until tomorrow simply gives you more time for your imagination to make a mountain out a possible molehill. More time for anxiety to sap your self-confidence. Do it now, brother, do it now.” ~ Author Unknown

55. “Procrastination is a way for us to be satisfied with second-rate results; we can always tell ourselves we’d have done a better job if only we’d had more time. If you’re good at rationalizing, you can keep yourself feeling rather satisfied this way, but it’s a cheap happy. You’re whittling your expectations of yourself down lower and lower.” ~ Richard O’Conner

56. “Yesterday is a cancelled check. Tomorrow is a promissory note. Today is the only cash you have, so spend it wisely.” ~Kim Lyons.

57. “If we accept and internalize the fact of our own mortality, then, by definition, we have to deal with the essential questions of how we live and spend our allotted time. We have to stop procrastinating, pretending that we have forever to do what we want to do and be what we long to be.” ~ Surya Das

58. “By one delay after another they spin out their whole lives, till there’s no more future left for them.” ~ Robert L’Estrange

59. “Delaying gratification is a process of scheduling the pain and pleasure of life in such a way as to enhance the pleasure by meeting and experiencing the pain first and getting it over with. It is the only decent way to live.” ~ M. Scott Peck

60. “I have spent my days stringing and unstringing my instrument, while the song I came to sing remains unsung.” ~ Rabindranath Tagore

61. “Only put off until tomorrow what you are willing to die having left undone.” ~ Pablo Picasso

62. “We are so scared of being judged that we look for every excuse to procrastinate.” ~ Erica Jong

64. “Life, as it is called, is for most of us one long postponement.” ~ Henry Miller

What have you been procrastinating on? Get started right now!