How You Sabotage Your Ability to Learn (and How to Stop) 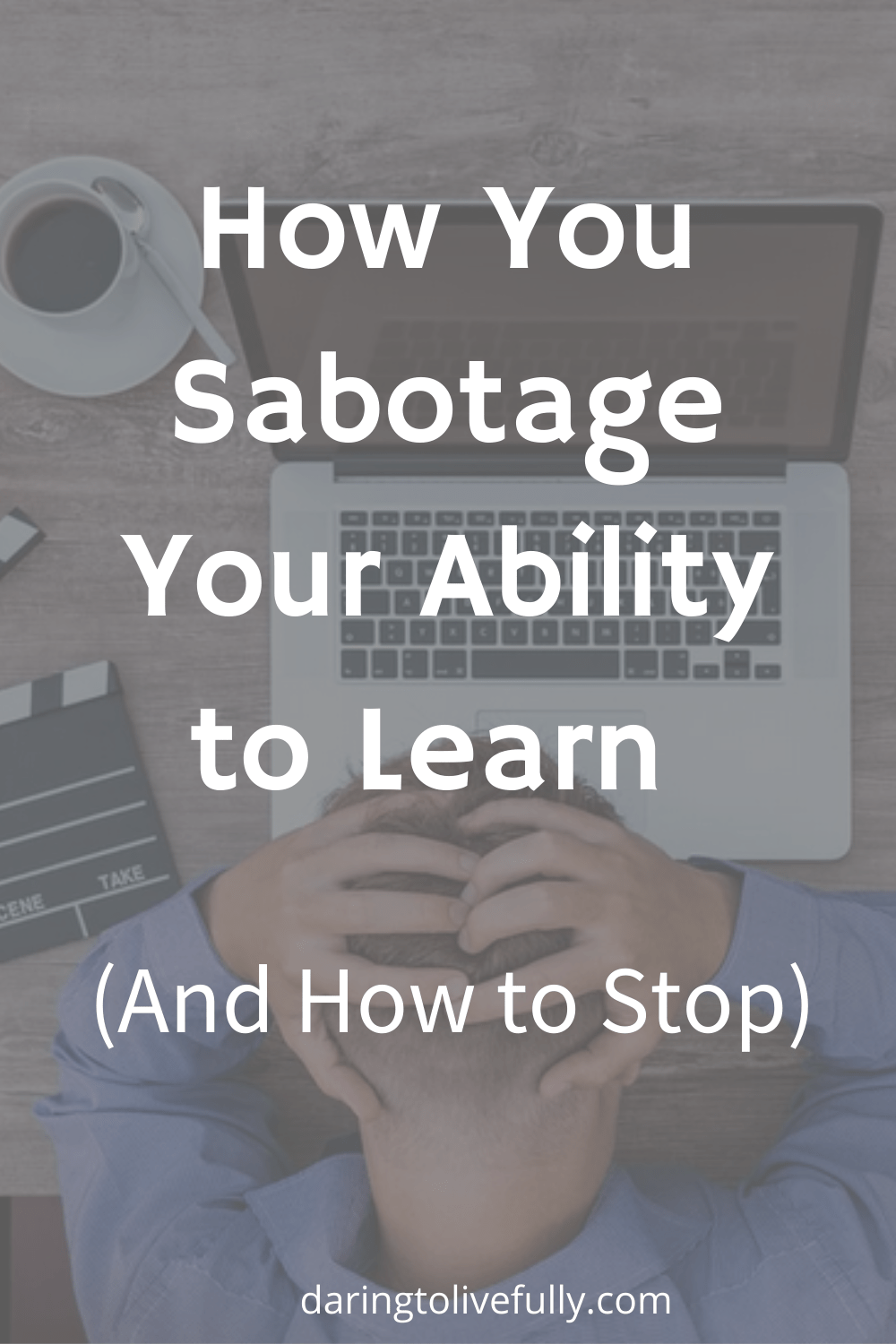 However, even if you’re physically capable of performing a squat—you have enough strength and flexibility—you may still have trouble squatting deeply. Why? Because your brain could be holding you back and stopping you from squatting.

If your brain thinks that squatting is dangerous for you–even if it isn’t because you have the physical ability to do it properly–it will send signals to your muscles to stop before you’ve gone all the way down.

In much the same way, a lot of the time the reason why you can’t learn a skill isn’t because you don’t have the ability to do so. Instead, it’s because your brain is holding you back, or—effectively—sabotaging you. Your brain sabotages you by holding on to false beliefs that hinder your ability to learn.

Here are three beliefs which may be sabotaging your efforts to learn new things:

Let’s debunk these beliefs one by one.

“I’m Not Smart Enough to Learn That Skill.”

I’m going to share something with you. Your ability to learn a skill depends mostly on the technique that you use to learn the skill and the quality of your practice. Your IQ has much less of an effect on your ability to learn new skills than was previously thought.

In the book, “Peak: Secrets From the New Science of Expertise”, Anders Ericsson explains that while certain innate characteristics, such as high IQ, may give people an advantage when they’re first starting out learning a skill, that advantage decreases over time.

This means that while there is an initial correlation between IQ and a person’s ability to learn a skill—very smart people pick up skills faster, at first—this correlation gets smaller and smaller as years of practice increase.

When it comes to scientists—a profession that you would normally associate with high IQ—Ericsson says the following: “Nobel prize-winning scientists have had IQs that would not even qualify them for MENSA.”

So, if you have trouble learning a skill, its not because you’re not smart enough to learn it. It’s because you haven’t acquired the meta-skill of learning how to learn.

I recently wrote a post on this blog titled: “A Mantra That Will Change Your Life: Everything Is Learnable”. In it I explain that everything—from personal development skills like being happier and becoming more confident, to entrepreneurial skills like creativity and problem-solving skills—is learnable.

As I shared with you in my previous post, I’ve always had great faith in my ability to learn new things. However, there’s one negative belief that I’ve had about my mental abilities since as long as I can remember.

I’ve always believed that I have poor spatial awareness. In fact, I had concluded that it was a defect that I had and there was no way to fix it.

However, I was reading the book “A Mind for Numbers: How to Excel at Math and Science” by Barbara Oakley, when I came across a section titled: “Spatial Abilities Can Be Learned”. In that section, Sheryl Sorby, an award-winning engineer, states the following:

“Many people erroneously believe that spatial intelligence is a fixed quantity—you either have it or you don’t. I’m here to say emphatically that this is not the case. In fact, I’m living proof that spatial abilities can be learned. I almost left my chosen profession of engineering due to poorly developed spatial skills, but I worked at it, developed the skills, and successfully completed my degree.”

I decided to put this statement to the test. I love puzzles, and I own several puzzle books that I bought from Amazon. There’s one type of puzzle that I would always get wrong, because it involves spatial ability. The puzzle consists of a cube that has been deconstructed, so you’re presented with a cross-like shape, where one end is slightly longer than the other end.

Then you’re presented with four different cubes, and you’re asked which cube is the only one that can be constructed from the deconstructed shape. This requires taking a 2D shape and visualizing it as a 3D shape. For the life of me I couldn’t solve these puzzles correctly. I kept telling myself:

“Marelisa, it’s because you have poor spatial reasoning. Just skip over these puzzles because you’ll never get them right.”

Now, whenever I come across one of these cube puzzles when I’m going through one of my puzzle books, I get them right. Because I learned how to do them.

There are many who believe that, as adults, their brains no longer have the malleability that’s necessary to learn new things. However, neuroscience has discovered that this isn’t the case. In recent years there have been many important discoveries about the brains’ ability to change itself.

Here are two of the most important:

Let’s look at the first of these. In the book “The Brain That Changes Itself: Stories of Personal Triumph from the Frontiers of Brain Science”, Norman Doidge, M.D., explains that the new science of neuroplasticity is overthrowing the centuries-old notion that the adult human brain is immutable.

In his book, Doidge shares remarkable stories that evince the brain’s ability to adapt, including stories like the following:

When it comes to learning new skills, one way that the adult brain learns is by creating new connections, or synapses, between brain cells. Researchers have recently found that in the adult brain, not only do existing synapses adapt to new circumstances, but new connections are constantly formed and reorganized.

In addition, for a long time the established dogma was that the adult brain couldn’t generate any new brain cells. That is, it was believed that you were born with a certain amount of brain cells, and that was it. And since you naturally lose brain cells as you age, after age 25 it was all downhill for your brain function.

However, scientists have now discovered that you can grow new brain cells throughout your entire life. The process is called neurogenesis. This is great news for people who want to learn new skills because new neurons enhance your ability to learn.

Adult learners rejoice: not only can you take advantage of your brain’s ability to create new synapses in order to learn new things, but you’re also growing new neurons which you can devote to acquiring new skills.

Previous post: How to Pick Yourself (Instead of Waiting for Others to Pick You)