How to Be More Daring, Bold and Audacious

What would your life be like if you were more daring, bold, and audacious? Would you go on more adventures? Would you pursue a different vocation? Would you have less regrets? 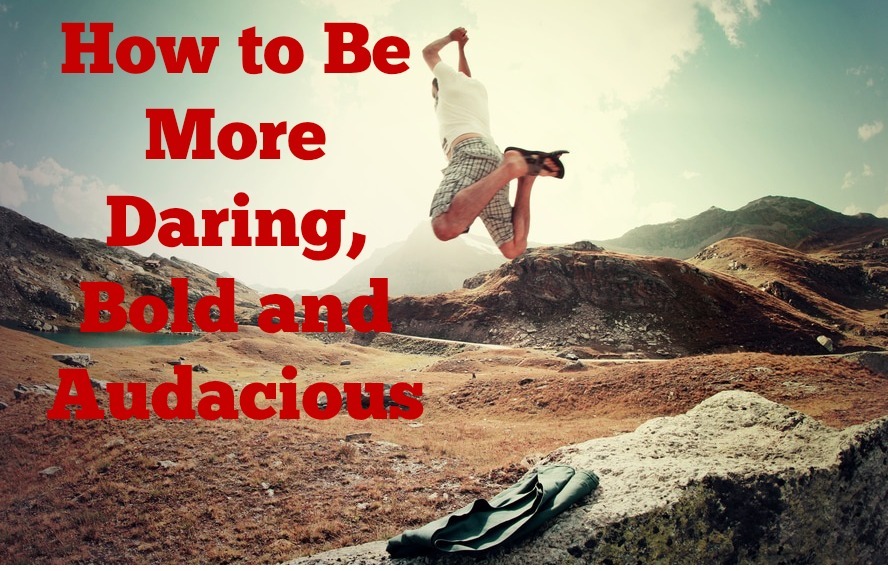 You’ve probably heard that the people who succeed in life are those who are smart and have a good education. However, not enough is said about the need to be daring, bold and audacious.

Brilliant people with Ivy League educations probably won’t get very far—or, at least they won’t get as far as they could–without these three qualities. At the same time, people who didn’t graduate at the top of their class and who went to community college can get far if they do have these traits.

If you’re looking for ways to be more daring, bold, and audacious, you’ll find seven of them below. (You can read the post below or watch the YouTube video.)

1. Stop Being So Scared of Looking Foolish. I jog three times a week along a jogging and cycling path that runs parallel to the ocean. In the last few of weeks, I’ve seen a woman—she looks American and is probably in her early fifties—rollerblading by. She doesn’t rollerblade very well at all. Frankly, she looks a little bit ridiculous—she teeters back and forth, and from side to side, and she looks like she’s scared of losing her balance and falling.

That being said, I sincerely admire the fact that she doesn’t seem to care how she looks. She wants to go rollerblading and that’s what she’s doing, regardless of what other people may think.

I used to rollerblade when I lived in Washington, DC—in fact, I’d rollerblade on Pennsylvania Avenue right in front of the White House—but I haven’t gone rollerblading in years. A few times I’ve thought to myself, “I want to start rollerblading again.”  Nonetheless, I kept putting it off because, at least at first, I’m going to be wobbling along and I’m going to look foolish.

Last week I decided that it was really dumb of me to put off rollerblading—which I remember was lots of fun—for fear of how I may look to others. I proceeded to do the following:

Tomorrow I’m going to get myself a pair of rollerblades. I’m no longer going to stop myself from doing something that I really want to do because of what others may think. That is, I’ve made the decision to be more daring.

Ask yourself: “What is one thing that I want to do but I’ve been putting it off because I’m scare of looking foolish?” Then, go do it.

As children we’re indoctrinated that we have to ask for permission for just about anything we want to do, and a lot of people enter adulthood still thinking that they need approval or consent from others before they act.

Be bold and realize that the only person you need permission from is yourself. Whatever it is that you want to do, give yourself permission to do it.

3. Start Before You Think You’re Ready. When I lived in Florence, Italy I met a girl from Mexico who was also living there. We both went to the same Italian language school, and then we both applied to, and got into, L’Universitá per Stranieri di Firenze (The Florence University For Foreigners).

Later when the girl went back to Mexico and I returned to Panama I got a letter from her. She was teaching Italian in her hometown. I was taken aback by this because it would never have occurred to me to go to the Accademia Italiana here in Panama and apply for a teaching position.

I’ve always thought that you need to have all your T’s crossed and all your I’s dotted before you do something.

Although when I left Italy I spoke Italian fluently, I didn’t take the C2 DELF test so I wasn’t “certified” as someone who spoke advanced Italian. But my Mexican friend hadn’t taken the test either, and that certainly didn’t stop her.

Because of that experience, I created a new rule for myself: “When I want to try something new, I’m going to give it a shot when I feel that I’m 80% ready.” I put that rule to practice when I wanted to get a realtor’s license.

To get a realtor’s license here in Panama you have to take a course and pass a test. I took the course and, although I didn’t feel 100% ready, I took the test the very next day after the course ended (most people wait a month before taking the test so that they can have time to study).

I passed –just barely, but I got the necessary score to get a realtor’s license. This meant I saved myself weeks of studying and worrying about the test.

To be bolder, more daring, and more audacious, get started before you think you’re ready.

4. Constantly Push Against Your Comfort Zone. Always be pushing against your comfort zone to keep it pliable, malleable, and flexible. Do things like the following:

By doing this, when the time comes to try something new which will have a big impact on your life, you’ll have an easier time doing it. After all, your comfort zone will no longer be tight like a corset, limiting your every move. Instead, it will be flexible and easy to move in, like a well-worn pair of jeans.

5. Break the Rules. Learn the rules, and then break them. Look at conventional guidelines as a framework. However, once you know how things are done, give free reign to your own self-expression. Ask yourself questions like the following:

Stop thinking that you need to do things like they’ve always been done, or like everyone else is doing them. Instead, be bold: make up your own rules and do things your own way.

6. Do Something You Think You Can’t. We all have a list of things we think we’d be really bad at or could never do. Here are some things that often make it onto people’s lists:

Pick one thing on your “Things I Can’t Do List” and give it a try. You may not be fantastic at it, but it’s almost certain that you will be able to do it. And the more you realize that you can do anything that you put your mind to, the more daring, bold, and audacious you’ll be.

7. Hang Out with Daring, Bold and Audacious People. Let’s face it, the people we hang out with rub off on us. If your friends are constantly shying away from trying new things, it’s very likely that you’ll become more hesitant when it comes to trying new things yourself.

On the other hand, if you’re part of a bunch of people that loves trying new things, it’s highly likely that you’ll find yourself tagging along and having lots of new experiences yourself. Watching people who are close to you take risks will encourage you to do the same.

I already mentioned my 8-year-old nephew above – he’s one of the boldest and most daring people I know. I look forward to spending more time with him now that we’re going to be rollerblading buddies, and I hope some of his audaciousness rubs off on me.

Previous post: How to Stop Comparing Yourself to Others and Stay In Your Own Life