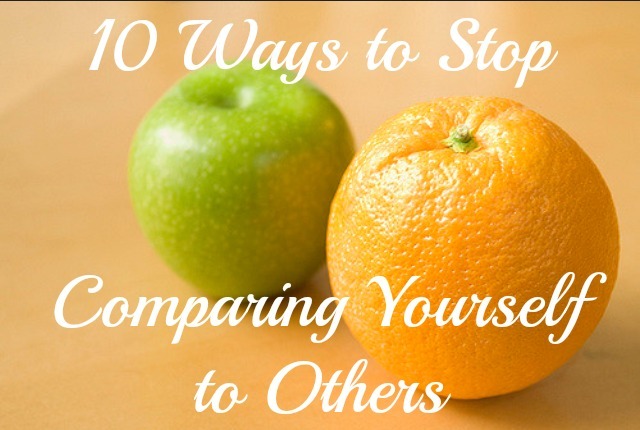 When you compare yourself to others you’re engaging in destructive behavior.

We live in a competitive society, which often means that we end up comparing ourselves to others. Am I prettier than she is? Do we make more money than they do? Is he a better father than I am? Comparing yourself to others can easily become a habit; and an incredibly destructive one at that.

Here are just some of the reasons why you should stop comparing yourself to others:

Below you’ll find ten ways to stop comparing yourself to others. You can read the post, or watch the YouTube video I made of the post:

1. Recognize You Are Incomparable. Why would you compare yourself to others, when you’re one of a kind? It may sound like a cliché, but the truth is that there’s no one else out there who’s exactly like you. Comparing yourself to others is dishonoring your uniqueness and your individuality.

Life is about being the best that you can be, not about trying to become someone you’re not.

2. Realize that Comparisons Are Unfair. Life isn’t a level playing field, so it’s not really fair to make comparisons. Look at the following:

A lot of the time people are “ahead of you” in life simply because they’ve had it easier than you have: they started out further ahead, they’ve had to face less obstacles, or they’ve been given more breaks. Is it really fair for you to compare yourself to those people? No, it’s not.

3. Dance to the Beat of Your Own Drummer. Just as you’re incomparable, your journey is incomparable. The path that you follow toward your destination doesn’t have to be the same path that someone else is following, even if you’re both trying to arrive at the same place.

Maybe your path has more detours than their path. But that doesn’t necessarily mean that their path is better. The reason your path is longer could be any of the following:

If someone is standing at the spot where you would like to be, instead of feeling bad because you’re not there yet, tell yourself that you’ll get there when the time is right for you. And when you do get to where they are now, you’ll be a better-rounded person than they are, and you’ll have better stories to tell.

4. It’s a Waste of Time. The time that you’re wasting thinking of others and comparing yourself to them is time that you could be using to improve yourself. Instead of spending forty minutes cyberstalking other people, use that time to do any of the following:

Your time is sacred. Why waste it thinking of the achievements of others?

5. Count Your Blessings. I once read that jealousy results when you count the blessings of others instead of counting your own.

The next time you’re feeling sorry for yourself because your best friend’s career is advancing more quickly than yours, or because the people down the street just bought a car that you can’t possibly afford, shift your focus from what they have to what you have.

You do this by counting your blessings.

6. Do What You Can with What You Have. Maybe the person that you’re comparing yourself to does have talents which you don’t possess.

As an illustration, your co-worker might be more charismatic than you are and, therefore, better at closing deals and making sales. C’est la vie. Instead of pining for their gifts, identify your own gifts, and then do the best that you can with what you have.

7. Compete With Yourself. Let’s face it, we live in a society that’s obsessed with measurements: height, IQ, GPA, rank, and so on. And the people with the high numbers never let others forget how well they’re doing. It can be hard not to compare yourself to others when other people are intent on letting you know how well they’re doing.

As long as you’re making progress, who cares how everyone else is doing. Instead of competing with others, compete with yourself.

As an illustration, I remember when I was in high school I knew a girl who had a fantastic figure. Later I discovered that she had an eating disorder.  I’m sure you’ve had a similar experience yourself, maybe something like the following:

No one’s life is perfect, regardless of how hard they try to make others think that it is. That person who you think has it all may just be really good at faking it and keeping up a façade. In fact, they may even be comparing themselves to you and thinking they’re coming up short.

9. Make Sure You’re Using the Right Metrics. Make sure that when you do measure how well you’re doing, that you measure the things that are important to you, instead of applying the metrics that others think are important. Here are some examples:

Don’t let other people push you into comparing yourself to them based on the metrics that they think are important. Instead, when you want to gauge how well you’re doing, choose your own metrics based on the things that are important to you.

If you look around and you notice that there are certain people who are doing better than you are—these people can be your friends, co-workers, peers, and so on–, use this as inspiration to try harder yourself.

In addition, you can use them as a role model. Ask yourself: What are they doing that I’m not doing? How can I learn from them? How can I replicate their success?

That is, instead of despairing because someone else is more successful that you are, use the comparison as motivation to improve.

Use the ten tips above to stop feeling inferior because someone else seems to be doing better than you are. Live your best life by dropping the habit of comparing yourself to others.

Next post: How to Be More Daring, Bold and Audacious

Previous post: 10 Ways to Use the Body-Mind Connection to Your Advantage