How to Develop Your Character – Benjamin Franklin’s Thirteen Virtues 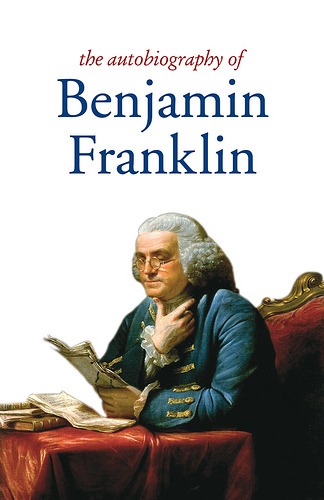 Benjamin Franklin–one of the Founding Fathers of the United States of America–was an author, political theorist, scientist, musician, inventor, and the list goes on and on.

How was Franklin able to accomplish so much? The key to Franklin´s amazing success was his continuous pursuit of self-improvement.

In 1726, at the age of 20, Franklin set the following lofty goal for himself:

“It was about this time I conceived the bold and arduous project of arriving at moral perfection. I wished to live without committing any fault at any time; I would conquer all that either natural inclination, custom, or company might lead me into.”

That is, he resolved to always do right, and to avoid any wrongdoing. In order to accomplish his goal, Franklin came  up with a list of 13 virtues which he would strive to live up to. In this post you’ll discover Franklin’s 13 virtues, the method that he used in order to adhere to these virtues, and a plan so that you can follow in Franklin’s footsteps.

Franklin developed his list of 13 virtues based on the moral virtues he had come across in his readings. In addition, he wrote down a few words about each of the virtues in order to clarify the meaning he gave to each one.

Here’s a list of the 13 virtues which Franklin committed himself to:

1. “TEMPERANCE. Eat not to dullness; drink not to elevation.”

The first virtue selected by Franklin was not to overindulge in food or drink. Franklin writes that he selected temperance first because “it tends to procure that coolness and clearness of head which is so necessary where constant vigilance was to be kept up”.

2. “SILENCE. Speak not but what may benefit others or yourself; avoid trifling conversation.”

By adopting this virtue Franklin wished, first, to gain knowledge, which he noted one acquires by using the ears instead of the tongue. Second, he wanted to “break a habit I was getting into (of) prattling, punning, and joking, which only made me acceptable to trifling company”.

3. “ORDER. Let all your things have their places; let each part of your business have its time.”

By achieving order Franklin expected to be able to have more time for the pursuit of his studies and other projects. In addition, Franklin explains that the “precept of Order requires that every part of my business should have its allotted time“.

4. “RESOLUTION. Resolve to perform what you ought; perform without fail what you resolve.”

5. “FRUGALITY. Make no expense but to do good to others or yourself; i.e., waste nothing.”

6. “INDUSTRY. Lose no time; be always employ’d in something useful; cut off all unnecessary actions.”

Franklin explains his inclusion of frugality and industry in his list of virtues as follows:

“Frugality and Industry, freeing me from my remaining debt, and producing affluence and independence, would make more easy the practice of Sincerity and Justice, etc.”

In his autobiography Franklin explains that he owes the acquisition of his fortune to frugality and industry.

7. “SINCERITY. Use no hurtful deceit; think innocently and justly, and, if you speak, speak accordingly.”

8. “JUSTICE. Wrong none by doing injuries, or omitting the benefits that are your duty.”

9. “MODERATION. Avoid extremes; forbear resenting injuries so much as you think they deserve.”

10. “CLEANLINESS. Tolerate no uncleanliness in body, cloaths, or habitation.”

11. “TRANQUILLITY. Be not disturbed at trifles, or at accidents common or unavoidable.”

12. “CHASTITY. Rarely use venery but for health or offspring, never to dullness, weakness, or the injury of your own or another’s peace or reputation.”

Of the virtue of humility, Franklin writes the following:

“My list of virtues contained at first but twelve; but a Quaker friend having kindly informed me that I was generally thought proud, that my pride showed itself frequently in conversation, that I was not content with being in the right when discussing any point, but was overbearing and rather insolent, of which he convinced me by mentioning several instances, I determined endeavoring to cure myself, if I could, of this vice or folly among the rest, and I added Humility to my list, giving an extensive meaning to the word.”

Franklin wisely decided not to try to tackle all of the 13 virtues at once. Instead, he would concentrate on one at a time. Here’s the methodology that Franklin developed in order to attain mastery over the 13 virtues which he had selected:

In his autobiography Franklin includes the chart which he used: 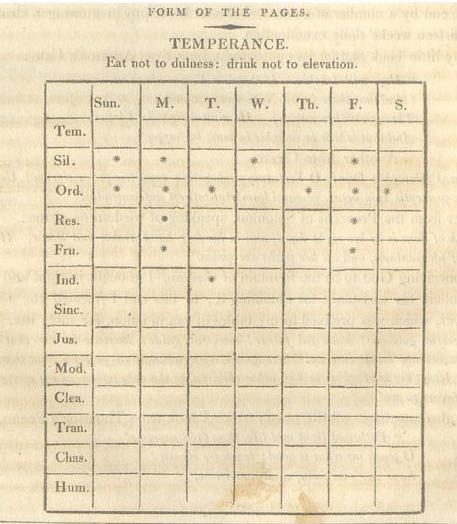 Franklin then proceeded to do the following:

Franklin was one of the first people to recognize that recording your behavior helps you to change it.In fact,he turned self-development into a science by observing, monitoring, and measuring his behavior.

If you would like to follow in Franklin’s footsteps, you can go ahead and download his chart of virtues here. Glue the chart to your day planner or to a notebook, and always carry it around with you, just like Franklin did. Instead of using a notebook, you can use your iPhone by downloading the Virtues App.

At the age of 79 Franklin wrote in his autobiography that he never did achieve his goal of attaining perfection. However, he did achieve the following:

“Tho’ I never arrived at the perfection I had been so ambitious of obtaining, but fell far short of it, yet I was, by the endeavour, a better and a happier man than I otherwise should have been if I had not attempted it.”

Live your best life by following Franklin’s example and adopting his 13 virtues. Or, better yet, come up with your own list of virtues. What virtues would you include in a “list of virtues”? Please share in the comments section below.

1. How to Make Decisions Like Benjamin Franklin
2. How to Write a Personal Manifesto
3. How to Level Up in Life – Turn Your Life Into a Game
4. Launch A 365-Day Project In 2013

Next post: Increase Your Creativity by Doing Things the Other Way Around

Previous post: 35 Powerful Beliefs About Money: From Trump to the Dalai Lama