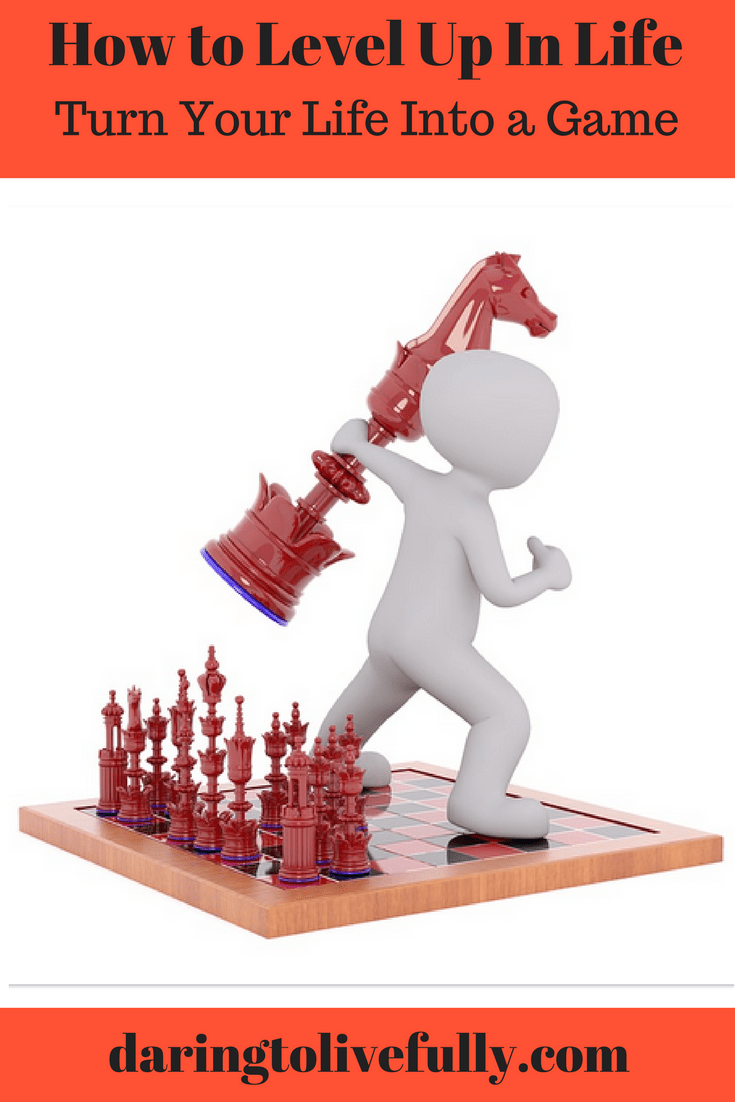 If you want to get more done and have fun doing it, gamify your life.

After all, if you can make something fun and include elements of play in it, you’ll be much more likely to be able to muster up the motivation to get it done. And that’s what gamification is all about.

When you’re playing a game you usually start at Level One. You’re a newbie, a beginner, a rookie . . . Then, as you take certain actions, you accumulate points. Once you have enough points, you move up to the next level. That is, you level up. You move up–from level to level– and, eventually, you move all the way up to the top level.

As an example, I used to create content for a site that was called Squidoo. At one point, Squidoo added several elements of gamification to their site in order to make it stickier (encourage users to spend more time on the site). Here are some of the things that you could do to “level up” on Squidoo:

Every time you took one of the actions listed above, you got points. Once you  had accumulated enough points, you moved up a level. As you level up you get rewards, such as the following:

You can improve your life by using this same system of leveling up.  Discover how to gamify your life below.

There are eight steps you need to follow in order to gamify your life. The steps are the following:

Each of these steps is explained in the following sections.

Step One – Identify Your Current Level

Suppose that you’re depressed and seriously overweight. If that’s your current situation, you’re at Level One for the life areas of both physical fitness and emotional well-being.

That’s OK. This doesn’t mean that you’re going to lose the game. It just means that right now–in those two areas of your life–you’re at the ground level. Now you just have to start working your way up the different game levels.

You’re sitting by the pool wearing a t-shirt and shorts because you’re too embarrassed to be seen in a bathing suit. After all, you haven’t been to the gym in months and you’ve been overindulging in chocolates and pastries. And, boy, does it show.

There’s a woman sitting across the pool from you wearing a bikini. She has what appears to be zero-fat, and a perfectly toned body. Let’s face it: in terms of physical fitness you’re at Level One and she’s at Level Ten.

The good news is that if you start taking action to level up, you can also reach Level Ten. Eventually.

The levels from depression to bliss look something like the following:

At each level the question becomes: “How do I move on to the next level?”

Step Four – Identify What the Next Level Looks Like

Let’s go back to our example in which you’re seriously overweight. You’ve already accepted that in terms of physical fitness you’re currently at Level One. Now, what does Level Two look like? You could decide that you’ll know that you’ve reached Level Two when you’ve achieved the following:

Now that you know what Level Two looks like, you have to identify how you’re going to get there.

Again, you’re at Level One in terms of physical fitness. You weigh 250 pounds and everything jiggles when you move. What action can you take in order to move up to Level Two? Here are some ideas:

However, remember that this is a game. Look for ways to make the action that you need to take in order to level up as fun as possible.

For example, there’s an app that you can download called “Zombies, Run!” which turns your daily run (or walk) into a virtual flee-for-your-life adventure. Each time that you go out for a walk or a run, you’re given a mission. You have to complete your mission without being caught by zombies.

If you want to drink more water, get yourself a funky glass. You can also try adding something interesting to your water, like strawberries, orange slices, or cucumber slices. Tell yourself that your morning cup of coffee is your reward for drinking 8 ounces of water as soon you wake up.

Turn the actions that you need to take in order to level up into a game.

Obviously, you gain absolutely nothing by making a list of the things that you need to do in order to level up, and then failing to take action. Once you’ve identified what you need to do, do it!

One of the best parts of leveling up is that you get a reward. Of course, losing 20 pounds is a great reward in and of itself! However, it helps if you give yourself a little something extra. In addition, make the reward related to the game that you’re playing.

As an illustration, when you reach Level Two you could get yourself a piece of equipment that you can use to help you with your workouts. Here are some examples:

After all, you’re no longer a newbie. You are now at Level Two, and you have the props that go along with being at this higher level. In addition, your rewards will help you in leveling up even further.

Keep leveling up until you reach Level Ten.

What level are you currently at for each area of your life (physical fitness, emotional well-being, relationships, career, and so on)? How can you move up to the next level? How can you make the action that you need to take fun? Live your best life by living your life as a game and continuously looking for ways to level up. Gamify your life!

Previous post: How to Get a Harvard-Quality Liberal Education In 15 Minutes a Day (For Free)