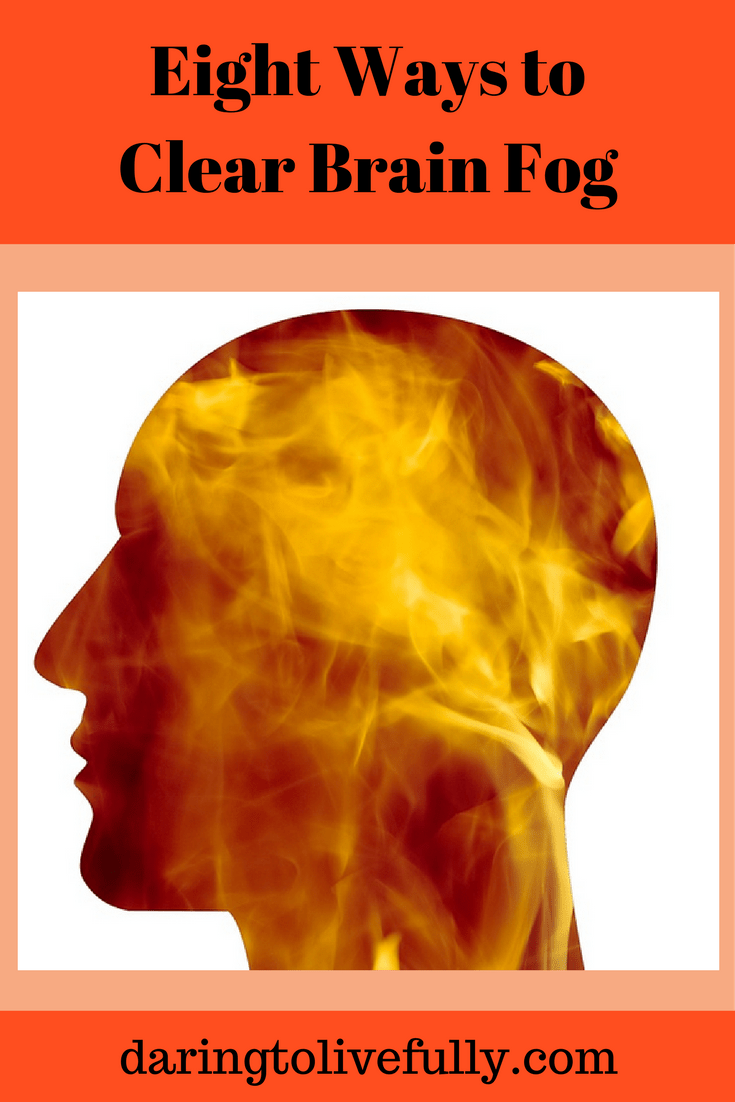 We’ve all had times in which our brain feels “foggy”, and it’s no fun.

“Brain fog” is a term that refers to symptoms that inhibit your ability to think clearly. These symptoms include confusion, forgetfulness, a muddled thought process, having “blank moments”, and an inability to focus and concentrate. In short, it’s when you feel like you just can’t think straight.

There are two main causes of brain fog:

This blog post addresses the first of these: brain fog that is caused by your lifestyle. Below you’ll find eight ways to clear brain fog so you can stay sharp, feel like yourself, and deal effectively with whatever the day brings. After all, having a clear, focused mind is key to having a successful life.

Brain fog is often a sign that there’s inflammation in your brain. In addition, one of the main culprits when it comes to inflammation is food. The good news is that, just as there are foods that inflame your brain, there are also foods that have anti-inflammatory effects.

According to the Harvard Medical School, these are some of the foods that will inflame your brain and body, and which you should try to avoid as much as possible:

Here are some of the foods with anti-inflammatory effects, which you should try to eat plenty of:

Head on over to your kitchen, go through your fridge and cupboards, and get rid of any inflammatory foods you find there. Then, go grocery shopping and load up on the stuff that’s good for your brain, and which will help you to get rid of your brain fog.

In 2012, researchers followed a group of 4289 men and women—with a mean age of 49.2 years—for more than 10 years.  They found that regardless of their weight or body mass index, those who got at least two and a half hours of moderate exercise each week lowered their markers of inflammation by at least 12 percent.

As was stated in the previous point, inflammation in the brain causes brain fog. Exercise, by reducing said inflammation, is incredibly helpful in clearing brain fog.

Dr. Lawrence Epstein, an instructor in medicine at Harvard Medical School, explains that having a sleep deficit has an adverse impact on thinking. Getting seven to eight hours of sleep a night can help you to eliminate fuzzy thinking and restore your mental clarity. Here’s Dr. Epstein:

“You really can make up for lost sleep and restore focus and clarity. You can lose the brain fog within a week. But start now; the longer you have bad sleep, the longer it will take to catch up.”

4. Cut Down On Stress

Evan Brand, a functional medicine practitioner, explains that the hippocampus is where short-term memories are turned into long-term memories. To illustrate the importance of the hippocampus, Brand refers to a medical case in which a man was having seizures; the doctors decided that the best course of action was to remove his hippocampus.

The good news was that the man’s seizures were cured. The bad news was that—while the man’s long-term memories remained intact–he lost the ability to create new memories.  What the doctors learned from this case was the importance of the hippocampus to a healthy brain.

What does this have to do with brain fog? If you’re constantly under a lot of stress, your body is continuously producing a hormone called cortisol. Too much cortisol can be harmful to your brain. Specifically, when you’re under chronic stress your hippocampus is basically being marinated in cortisol.

In the short-term, the result of this is mild cognitive impairment, or brain fog. Over the long-term, the cortisol can start eating away at your hippocampus. This can lead to early onset of dementia and Alzheimer’s.

There are many ways to reduce stress, including simplifying, prioritizing, and taking frequent breaks throughout the day to help you recharge. Another great way to deal effectively with stress–and keep your brain clear of fog–is to meditate. This is discussed in the next point.

Psychotherapist Mike Dow is the author of “The Brain Fog Fix: Reclaim Your Focus, Memory, and Joy in Just 3 Weeks”. He indicates that one of the best ways to clear brain fog is by meditating for 12 minutes a day.

Here are 2 meditations you can try:

6. Have a Wellness Shot

Something else that Dow indicates will reduce your brain fog is the spice turmeric. Turmeric contains curcumin, which has major anti-inflammatory and antioxidant properties. It also increases levels of a protein called BDNF (brain-derived neurotropic factor) which has been dubbed ‘Miracle Gro’ for the brain.

Dow recommends that you get your daily dose of turmeric in a wellness shot. Here’s what you need to do:

Just put everything in a shot glass, chug it down in one fell swoop, and be done with it.

Dow adds that if you do this every day, it will help to remove the plaque that causes brain fog, dementia, and even Alzheimer’s. In fact, Dow indicates that if you have turmeric every day, your chances or getting Alzheimer’s can be reduced by 90%.

7. Get Plenty of Omega-3 Fatty Acids

As was stated in the first point of this blog post, what you eat can either fog your brain, or it can clear it of brain fog. Dr. Dow explains that—to keep your brain sharp—it’s vitally important that you eat foods that are rich in Omega-3 fatty acids.

Although one of the best sources of Omega-3 is wild-caught salmon, salmon can be pretty pricey. Dr. Dow indicates that a cheap, healthy, and readily available source of Omega-3 is farm raised rainbow trout. In addition, Dr. Dow recommends that you eat almonds, walnuts, and flaxseeds, all of which are also good sources of Omega-3 fatty acids.

One of the causes of brain fog is dehydration. Up to 75% of Americans are thought to be chronically dehydrated because they don’t drink enough fluids throughout the day. Because a large portion of the brain is made up of water, even slight dehydration can have a negative impact on short term brain plasticity.

This negative impact on short term brain plasticity results in mental decline and fog-like symptoms. If you want to keep brain fog at bay, be sure that you drink lots of water. If you need some help with this, I wrote a post on 10 Simple Ways to Drink More Water.

Which of the tips above will you start implementing today in order to move the fog out of your brain, be able to think clearly, and keep your brain sharp? I, for one, am doing all of them. After all, my brain is my most important asset. Live your best life by clearing your brain fog.

If you suffer from chronic brain fog, this could be caused by an underlying medical condition. Please see your doctor.

Next post: The Secret of the Happiest People In the World