How Gratitude Can Change Your Life – The Power of “Thank You” 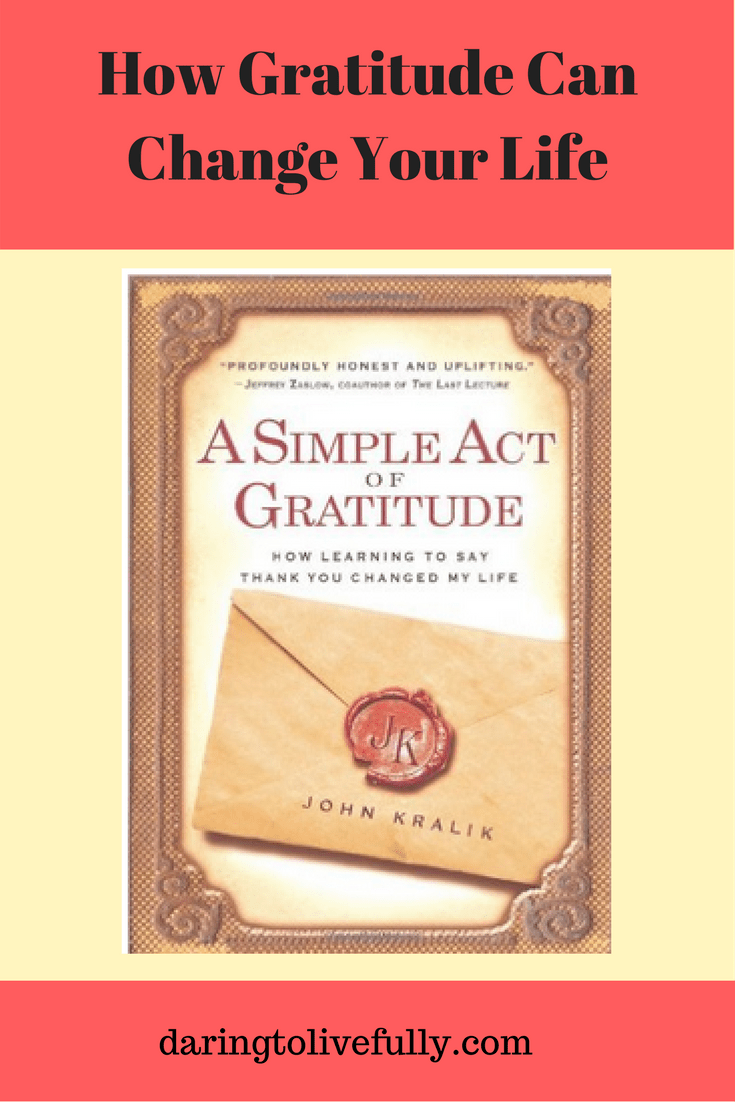 As John Kralik discovered at the age of 53, gratitude can change your life. In his book, 365 Thank Yous: The Year a Simple Act of Daily Gratitude Changed My Life, Kralik explains that in December of 2007 everything in his life seemed to be going wrong. This was his situation at the time:

While hiking in the hills near his home on New Year’s Day, Kralik decided that he would try to lessen his misery by focusing on the things in his life that he was grateful for, instead of focusing on the things that were going wrong. He remembered his grandfather who had taught him the importance of writing thank you notes. This inspired Kralik to set the goal, right then and there, of writing 365 thank you notes in the coming year.

A year later, Kralik’s life had completely changed. His book, “365 Thank Yous”, is the story of how.

However, when he ran out of co-workers he got stuck again. He began telling himself that he didn’t really have anything to be grateful for. That’s when he walked into his regular Starbucks and the barista greeted him by name, asked if he wanted his usual drink, and gave him a big smile. Kralik was struck by the fact that he was receiving such cheerful, personalized service. He asked the barista for his name and then wrote him a simple thank you note.

The note said the following:

“Scott, Thank you for taking the time each morning to greet me in a friendly way. It is also so wonderful to me that you took the time and trouble to remember my name. In this day and age, few people make this effort, and fewer still do it in a way that feels sincere. You do both. It really makes a difference to me every day.”

As Kralik continued with his “365 Thank Yous” project, he realized several important things, including the following:

First, he noticed that writing the thank you notes kept him focused on the little things which he had been taking for granted. This shifted his attention from what was going wrong in his life, to what was going right. He realized that he really didn’t have such a bad life, and that he was surrounded by people doing things for him.

Second, Kralik’s exchanges with others changed. About two months after he started the project he stopped responding to the question of “How are you?” by griping about his problems. Instead, he started referring to the thank you note that he had written the day before in his conversations. Here’s an example:

If on the previous day he had written a thank you note to his daughter’s teacher, he would talk about how happy he was that his daughter was doing well in school and that she had a fabulous teacher who really took an interest in her students.

Third, Kralik began looking for something to be grateful for even in bad situations. At one point, he decided to write a thank you note to his second wife whom he was in the process of divorcing. However, he felt so much anger toward her that he just couldn’t get himself to think of something to thank her for.

Then he thought of the fact that she was doing a great job raising their daughter, and he realized that he was grateful to her for that. Giving his wife thanks for being a good mother to his child helped to make their relationship more cordial, and the divorce proceedings became smoother.

Fourth, Kralik realized that giving thanks doesn’t just have a positive effect on the life of the person showing gratitude. It also has a positive effect on the person who’s on the receiving end. People feel validated when they’re recognized by others for something they’ve done. In fact, Kralik discovered that a lot of people were keeping his hand-written thank you notes. Others like feeling appreciated, and knowing that what they do matters.

In November, Kralik was sitting at a table in his law firm, surrounded by his co-workers. They were having a meal together in order to celebrate Thanksgiving. Kralik was asked if he wanted to say a few words, and this is what he said:

“When we began this year I made a New Year’s resolution that I would try to find one thing each day for which I would be grateful. It is now November; I have kept that resolution. And what I found each day, as I searched for someone or something for which to be grateful, was that the answer was very often the people I see every morning who help me through each day, and who do the difficult without questioning whether it’s necessary, and who look for ways to do more than what is asked. I have learned how truly lucky I am to have in my life the people who are gathered around this table. You have made our firm a good one, and you’ve made my life a good one. On Thanksgiving I can truly see at this table how blessed I am and how much I have; how much I should be thankful for.”

Writing the thank-you notes transformed Kralik’s life. By showing gratitude for even the smallest things that went right, the big things started to fall into place. By the time he wrote his 365th thank you note he was a much happier person, he’d gotten back with his girlfriend, he’d lost weight, his business was prospering, he’d grown closer to his children, and he’d reconnected with old friends he had lost touch with. Today, Kralik is a judge in the Los Angeles Superior Court.

Here’s the trailer for 365 Thank Yous: The Year a Simple Act of Daily Gratitude Changed My Life:

Who do you need to thank? Will you take a similar challenge? Remember: gratitude can change your life.

Next post: How to Start Your Day the Right Way

Previous post: Srikumar Rao On Happiness – Four Exercises That Will Make You Happier