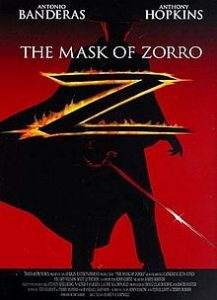 Several years ago, the film “The Mask of Zorro”—starring Antonio Banderas, Anthony Hopkins and Catherine Zeta Jones—was playing in movie theaters. The tale of Zorro is well-known: Zorro was a masked swordsman who was a champion of the people and who fought against official corruption in early 19th century California.

At the very beginning of the film we meet Alejandro Murrieta. Alejandro is a young man who wants to get revenge for the death of his brother and who wants justice for his village. This involves fighting against an entire army. However, since he’s undisciplined and untrained, Alejandro fails to make much progress toward achieving his goal.  In despair over his inability to defeat the army, he turns to drinking.

That’s when Alejandro comes across Don Diego de la Vega, or Zorro. Don Diego decides to train Alejandro to become his successor. Although Alejandro shows some promise with the sword, he’s impulsive and reckless. Therefore, Don Diego introduces Alejandro to the “Training Circle”. Here’s a description of the training circle:

Below you’ll find three examples of how you can implement “The Zorro Circle” in order to help you achieve your goals.

Use “The Zorro Circle” to Organize and Declutter

If your home is cluttered and disorganized, instead of setting the task of decluttering your entire house, draw a Zorro Circle around an area of your home that you use on a regular basis. As an example, you could choose the kitchen sink. Clean and clear the kitchen sink. Then, actively guard that area from any and all clutter. Even if the rest of the house is a mess, you have to make sure that the kitchen sink is always spotless.

Concentrate on “The Zorro Circle” around your kitchen sink for however long it takes you to master it. Once it’s become habitual for you to keep that area of your home clean and decluttered, draw a “Zorro Circle” around a different area of your house. Follow this process, gradually, until your entire home is not only clean and decluttered, but it’s become a habit for you to keep it that way.

Use “The Zorro Circle” to Conquer Stress

Stress is the plague of the 21st century. Most of us have too much to do and too little time in which to do it, which makes our stress-levels skyrocket. “Reduce stress” is on most people’s lists of goals.

Instead of telling yourself that the only way to reduce the stress in your life would be to chuck it all and move to a monastery high up in the Himalayas, start drawing Zorro Circles around your stress. You can start by identifying one stressful area of your life and drawing a Zorro Circle around it.

For example, let’s say that one situation that creates a lot of stress for you is getting to work on time each morning. Draw a Zorro Circle around your mornings and ask yourself what you can do within your Zorro Circle in order to improve the situation. Here are some options:

Keep working on your morning Zorro Circle until you have it under control. Then, move on to the next stressful area of your life and draw a Zorro Circle around it.  Tackle one Zorro Circle at a time and keep going until you’ve achieved your goal of reducing the amount of stress in your life.

Use “The Zorro Circle” to Take Control of Your Finances

Lots of people feel that their lives are completely out of control when it comes to their finances. Their debts have piled up, and they have to struggle just to make ends meet. If you’re one of these people, you can gain control over the situation by drawing Zorro Circles around your finances.

By following this process you’ll have made a tiny dent in the pile of debt that you owe. That small victory will show your brain that you do have the ability to take control of your finances. This will encourage you to keep going and to keep drawing more Zorro Circles, until you’ve taken complete control over your finances.

Instead of setting the goal of fighting an entire army at once, fight within your Zorro Circle. As you successfully defend your Zorro Circle, —that is, as you conquer each task toward the achievement of your goal–, you’ll be ready to expand your circle. Live your best life by following this process until you’ve achieve your large and ambitious goals.

1. Seven Ways Your Body Language Can Positively Influence Your Life
2. What’s Your Normandy?
3. An 18 Minute Plan That Will Make Your Productivity Soar
4. Get What You Want by Cultivating a Really Useful Attitude

Next post: 8 Ways to Release the Ghosts of the Past and Be Happy in the Present

Previous post: How to Complain Effectively and Get What You Want