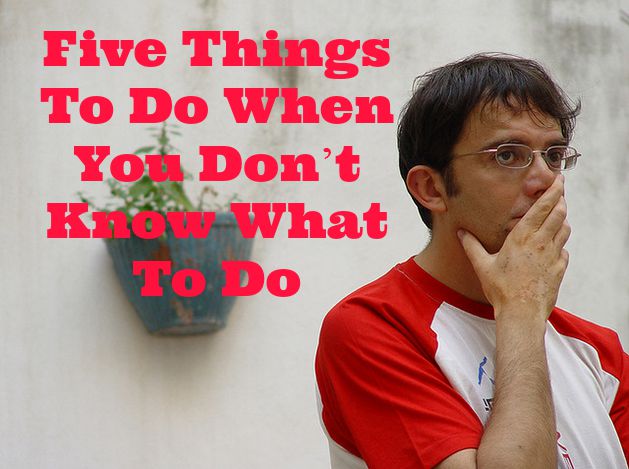 Sometimes you just don’t know what to do.

You’re a grown-up. So, you’re always supposed to know what to do, right? Unfortunately, that’s not always the case. Look at the following situations:

First, accept that it’s OK not to know everything. Then, look for a way to get back in the game. Below you’ll find five things to do when you don’t know what to do.

1. Get More Information. Whatever problem you may be having at this moment, you can rest assured that someone else has already had that problem. And they’ve solved it. In addition, they’ve written a book or an article about the problem and what they did to solve it, or they’ve created a YouTube video explaining what they did.

Look for that information and use it to plan your next step.

2. Find a Mentor. One of my favorite TV shows of all time is “The West Wing”. It’s fast, it’s entertaining, and I learn something new every time I watch an episode of the show, no matter how many times I’ve seen it before. In one episode, Leo—the Chief of Staff—tells the following story to his assistant, who’s going through a hard time:

“This guy’s walking down the street when he falls in a hole. The walls are so steep he can’t get out.

“A doctor passes by and the guy shouts up, ‘Hey you. Can you help me out?’ The doctor writes a prescription, throws it down in the hole and moves on.

“Then a priest comes along and the guy shouts up, ‘Father, I’m down in this hole. Can you help me out?’ The priest writes out a prayer, throws it down in the hole and moves on.

“Then a friend walks by, ‘Hey, Joe, it’s me can you help me out?’ And the friend jumps in the hole. Our guy says, ‘Are you stupid? Now we’re both down here.’ The friend says, ‘Yeah, but I’ve been down here before and I know the way out.'”

When you’re facing a problem and you don’t know what to do, find a friend or acquaintance who has already been in the hole you’re currently in. Then, ask them for help getting out, or for some advice or ideas on what to do.

3. Act, Learn, Build, Repeat. The Harvard Business Review has an article in which they lay out the process that you should follow when you don’t know what to do. The process they recommend is the following:

4. Do The Obvious. The other day I came across a booklet called “Obvious Adams: The Story of A Successful Businessman”. It was first published as a short story in the Saturday Evening Post in April, 1916. The story was an immediate hit and soon became a business classic.

Oliver B. Adams was an ordinary man. He was not particularly bright, good looking, or charismatic. However, he was in advertising—which is a very competitive field—and he managed to rise to the very top of the world of advertising. He did this by having a knack for the obvious.

Here’s what the author of the booklet, Robert R. Updegraff, once said about doing the obvious:

“The trouble is, the obvious is apt to be so simple and commonplace that it has no appeal to the imagination. We all like clever ideas and ingenious plans that make good lunch-table talk at the club. There is something about the obvious that is–well, so very obvious!”

Adams succeeded because at every step of his life, he did the obvious thing. That is, he did the thing which most people miss because it’s so simple. Instead of coming up with long, drawn out, complex plans, he would look for the most common sense approach to solving the problem before him.

The next time you don’t know what to do, follow Obvious Adams’ lead. Ask yourself, “What’s the obvious solution or the obvious next step?” Then, do the obvious. (You can read “Obvious Adams”, for free, here.)

5. Find a Bright Spot. In their book, Switch: How to Change Things When Change Is Hard, brothers Chip and Dan Heath explain that one approach to solving problems is to look for bright spots. That is, find out what’s working and do more of it.

For example, suppose that your child comes home with their report card. The good news is, he got an A+ in English. The bad news is, he’s barely passing science. At that point, if you’re going to follow the bright spot approach, you would do the following:

When you’re facing a situation in which you don’t know what to do, think of problems that you’ve solved in the past, or think of goals that you’ve been successful in achieving. Ask yourself the following questions:

Figure out what to do, when you don’t know that to do, by thinking of the bright spots in your life and looking for ways to clone or replicate them.

Previous post: 25 Ways to Bring More Peace Into Your Life