How Constraints and Limitations Will Make You More Productive & Resourceful 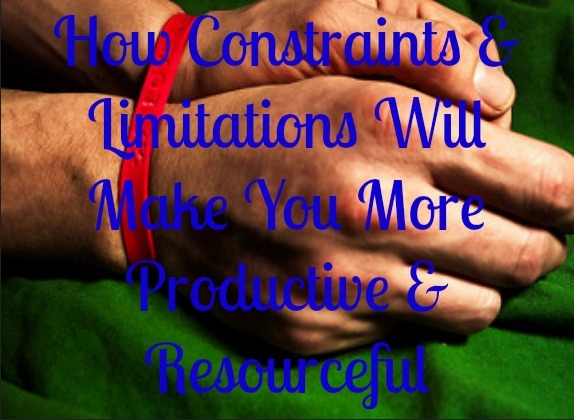 Most people see constraints and limitations as something negative which stops them from achieving their dreams. They tell themselves that they would write their novel, start their business, or travel more, if they had the time and the money, or if this or that weren’t in the way. But what if the opposite were true? What if constraints were a good thing?

Igor Stravinsky–one of the most important and influential composers of the 20th century–once said the following: “The more constraints one imposes, the more one frees one’s self. And the arbitrariness of the constraint serves only to obtain precision of execution.” A lack of constraints is paralyzing. You have too many choices; there are too many possibilities. Constraints and limitations, on the other hand, give you structure and set boundaries which allow you to channel your creativity and direct it toward the goal that you’re trying to achieve.

Here are ten examples that illustrate how constrains and limitations are good for productivity and creativity:

1. Quick Prototypes. Marissa Ann Mayer, the current president and CEO of Yahoo!, explains that “Constraints shape and focus problems and provide clear challenges to overcome.” Mayer adds that when she was vice-president for search products and user experience at Google, she would create constraints such as the following:

Mayer indicates that by taking ideas and working on them with a small team for a short period of time, they could quickly determine whether it was a good idea or not. If it looked like it was a good idea, then they would run with it.

However, if the quick prototype showed that the idea probably wasn’t going to work, they would discard the idea. Discarding the idea wasn’t too painful since they’d only made a small investment in it.

This strategy–creating people and time constraints–helped them move rapidly through ideas and pick the winners.

2.  Word Limit. Green Eggs and Ham is a much loved classic by the world-renown Dr. Seuss. Lots of kids have learned to read with the help of Sam-I-am. What you may not know is that when Dr. Seuss started writing the book he had a constraint of using only 50 unique words.

The constraint was created as a result of a bet that he made in 1960 with Bennett Cerf, the co-founder of Random House.  And the bet paid off: Green Eggs and Ham went on to become Dr. Seuss’s bestselling book.

3. Budgetary Constraints. Here’s a quote from my eBook, “How to Be More Creative: A Handbook for Alchemists“, which shows how budgetary constraints can be a good thing:

In “The Houdini Solution: Why Thinking Inside the Box is the Key to Creativity”, Ernie Schenck explains that almost everything in our lives is a box. That is, life is full of limits, lines, and boundaries.  This applies to our relationships, our jobs, where we live, our bank accounts, and so 0n.  The question then becomes: how can we be more creative within the confines of our lives?  Ernie argues that limitations are not inhibitors, but liberators.

He gives the example of “The Blair Witch Project” which is a horror film made for about $50,000.00; it ended up grossing over $240 million worldwide.  The budget constraints were actually what made the movie so successful: the whole movie is told through the “recovered footage” of three young filmmakers who went into the woods to film a documentary about a local legend known as the Blair Witch, and who subsequently go missing and are never found again.

This film making process–telling the story through a faux black-and-white documentary filmed by inexperienced students–is precisely what adds the element of eeriness and horror to the film which makes it so effective in freaking out audiences.

One of the actors of “The Blair Witch Project” remarked that “The constraints of this film became the essence of this film, which became the power of this film.” The makers of “The Blair Witch Project” didn’t allow the box, that is, their limitations, to defeat them. Instead, they allowed their limitations to shape and mold their vision into something it would never have become if they had had the budget to use the best equipment available and hire A-list actors.

4. Time Limits. It’s almost time for NaNoWriMo — a challenge which encourages people to write a novel during the month of November. Some might think that trying to write a novel in 30 days is nuts. However, it’s worked for hundreds of thousands of writers.

The time constraint created by NaNoWriMo does all of the following for a would-be writer who keeps dilly-dallying instead of writing:

Taking the NaNoWriMo challenge is a great way to stop thinking about writing a novel, and just getting it done.

5. Constraints as Building Blocks. Creative genius Frank Gehry is known for his eclectic postmodern designs, including the Walt Disney Concert Hall and the Guggenheim Museum in Bilbao, Spain. Gehry has said that constraints are the cornerstones of his creativity.

In fact, he once remarked that one of his greatest architectural challenges was the time he was asked to design a house with zero constraints. Gehry says the following:

“I had a horrible time with it. I had to look in the mirror a lot. ‘Who am I? Why am I doing this? What is this all about?’ It’s better to have some problem to work on. I think we turn those constraints into action.”

Having to follow strict standards–such as the acoustics at Disney Hall–are precisely what inspires Gehry’s award-winning designs. Instead of seeing constraints as obstacles, Gehry sees them as building blocks.

6. Limit the Scope. In my ebook, The One-Hour-A-Day Formula–I write about David Gaffney. Gaffney wanted to become a writer. However, he felt that he didn’t have the time to write. Then, he decided to stop making excuses and use his time constraint to his advantage.

Although he couldn’t write a novel in the time he had, he could make time to write one 150-word story a day. He wrote a bunch of these tiny stories and he published them. His collections of short stories sell well, and Gaffney achieved his dream of becoming a writer. He did this by using the limitations he was facing and twisting them in his favor.

7. Think Inside the Box. Roger von Oech, author and creativity consultant, argues that he does some of his best thinking not when his thinking outside the box, but when he’s in the box. That is, when he has a tight set of guidelines that he has to follow. Von Oech uses his Creative Whack Pack as an example of this.

Von Oech indicates that he had always wanted to take his sixty-four creative thinking strategies and boil them down so that each one could fit on a card. That way, he could create a card deck that businesses could use to become more innovative. This was difficult to do since cards are small and there’s very little space to work with.

However, von Oech explains that this space limitation is precisely what allowed him to create a tool which can be quickly pulled out during meetings and be put to use in solving problems and generating ideas. After all, the limited space forced him to get to the essence of each creative strategy and write it down like a catchy motto.  Presented in this way, his strategies are easy to grasp and to apply.

8. Force Yourself. Jack White, who’s most famous for being the lead singer of The White Stripes, is known for intentionally putting limitations on himself and forcing himself to work within certain boundaries. Here’s Jack White on inspiration v. constraints:

In addition to the constraints White mentions in the quote above, he also uses low-quality instruments that he has to fight with to get the sound and attitude he wants. To him, constraints and creativity go hand-in-hand.

9. Think Like a Poet. Most poetry still depends on literary forms with exacting requirements. For example, a haiku consists of 3 lines. In addition, the first and last lines of a haiku have 5 syllables and the middle line has 7 syllables.

It sounds like having to work within these boundaries limits creativity, doesn’t it? Actually, no, it doesn’t. It’s precisely those limits which help to both stimulate the artist’s imagination and focus their thinking, both of which are necessary for creativity.

10. The 10/20/30 Rule. Silicon Valley marketing executive and venture capitalist Guy Kawasaki is an evangelist for something he calls the 10/20/30 Rule of PowerPoint. He argues that in order to create effective PowerPoint presentations you need to adhere to the following limits:

In order to adhere to the limits set by Kawasaki you really have to know what you’re talking about. After all, you can’t hide behind a wall of meaningless words and phrases.

Instead of being a hindrance, the limits sets by the 10/20/30 Rule of PowerPoint give you a formula to follow which will greatly increase your chances of having the audience respond favorably to your call of action.