How To Do the Things You Don’t Want to Do 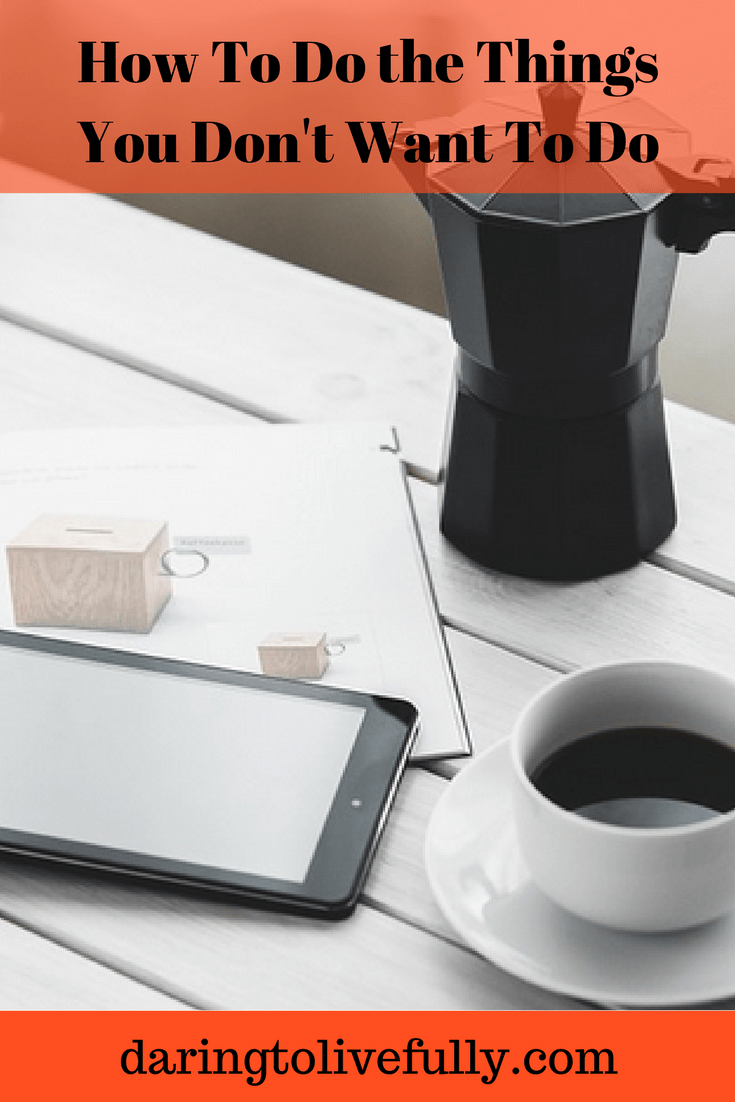 The way to get ahead in life is to do the things you don’t want to do.

Without a doubt, you’ve heard the following a million times: set priorities, identify the most important thing that you need to get done, and then get to work on that thing first. Most people know this is what they need to do—it’s the only way to get ahead in life. But then, why don’t they do it?

Because the most important thing that needs to get done is—more often than not–really hard to do. The odds are high that it’s something complex, difficult, challenging, novel, or risky. Sometimes, it’s all of these things combined.

That’s why another way of saying “do the most important thing first” is “eat the frog”. After all, nobody wants to eat a frog. Frogs are ugly and slimy. Eating a frog sounds incredibly unpleasant. And so do all of the following:

But those are the things that will get you the results that you’re after, and the big rewards.

So, how do you get yourself to take the plunge and get to work on those big, hairy, overwhelming tasks? In this post you’ll discover ten tips for getting yourself to do the things you have to do to get ahead, even if you don’t want to do them.

1. Exit the Avoidance Zone as Soon As Possible

The Avoidance Zone is that space of being in which there’s something important that you need to get done, but you keep putting it off. You put it off by getting to work on unimportant things: items that are lower down on your list of priorities; tasks that someone else should be doing; or mindless activities like checking your twitter feed for the umpteenth time.

It’s an awful place be to be in, full of dread and anxiety. The task that you need to get to is always looming in the back of your mind, no matter how much you try to think of other things.

In addition, when you’re in the Avoidance Zone you’re not getting anything important done. Therefore, you’re suffering, but you have nothing of value to show for that suffering.

To make matters worse, the longer you put something off, the scarier it gets. The task that must be done, but that you’re desperately avoiding, gets bigger and uglier with every passing day. And the bigger and uglier it gets, the harder it is to get to it.

2. Demystify the Task by Unpacking It

It’s incredibly difficult to get to work on a task that looks like something you’ve never done before. However, the key here is that—whatever the task is–it just looks like something new. The reality is that once you unpack the task, you’ll realize that it’s comprised of subtasks that you are familiar with.

Imagine for a moment that, like most people, you know nothing about coding. However, it’s something that you need to learn to do if you want to get ahead in your profession. Although coding looks incredibly foreign—and, therefore, scary– once you unpack it you’ll realize the following:

All of a sudden, coding doesn’t look so unfamiliar and strange any more. Right? In fact, it’s looking more and more accessible. That’s because we took a moment to unpack it, and thereby demystify it.

Heidi Grant Halvorson, Ph.D., explains that when you’re striving to achieve a goal, your focus can be on either promotion or prevention. If you have a promotion focus, then you’re focused on everything that you’ll gain by achieving the goal. But when you have a prevention focus, your focus is on the negative consequences that you’ll be able to avoid by attaining the goal.

The problem with having a promotion focus is that it often leads to procrastination. This is because thoughts of achievement will often lead to self-talk like the following:

The end result of these thoughts is that you’ll look for ways to put off the task in a desperate attempt to avoid those consequences. That is, to avoid failing or producing sub-par work.

On the other hand, if you have a prevention focus, then you’re focused on doing what needs to be done in order to avoid a negative result. A prevention focus lowers the bar, which makes it easier to get started with the task.

In addition, a prevention focus will get you to act because acting is the only way to get yourself out of danger – such as the danger of losing your job if you don’t hand in your work assignments on time.

With a prevention focus, instead of visions of grandeur, you’re just trying to get yourself to safety. This focus will force you to eliminate the nonessential, stop waffling, and get to it. Do the things you don’t want to do by focusing on prevention.

4. Stop Saying You Don’t Know Where to Start

Here’s one of the favorite excuses for people who are trying to avoid difficult tasks: “I can’t work on that task, because I don’t know what to do”. Well, guess what. There’s something called “Google”.

Important tasks need to be scheduled in order to get done. In fact, most productivity experts will agree that you should work on your most important task of the day first thing in the morning. By doing the most important thing first, then every day you’ll get something important done.

Help yourself to get started with a difficult task by telling yourself that the task won’t last forever. You do this by setting a time limit. Set your timer for 25, 30, or 45 minutes. Then, get to work on the task—with no distractions—until the timer goes off.

No matter how much discomfort you may feel while you’re working on the task—because it’s difficult and requires a lot of focus and effort—you know that there’s an end to your suffering, and it’s coming soon. You just have to keep going until the timer goes off.

7. Focus On What’s Right In Front of You

Once you’ve set your timer, focus on the work that’s right in front of you. That is, don’t think of everything that you need to do in order to finish the task. Instead, keep your attention on what you’re doing now.

As an illustration, if you’re working on an eBook, don’t think of the 50,000 words you have to write in order to finish it. Just focus on the one-thousand words that you need to write right now.

Do what you don’t want to do by taking your eyes off the staircase and placing all of your focus on the next step.

8. Be Willing to Enter the Discomfort Zone

You’ve heard me say this a thousand times on this blog: get comfortable with discomfort. That’s because it’s so important—learning to tolerate discomfort is one of the keys to success.

Nonetheless, when most people feel discomfort, the first thing they do is try to run away from it. The next time that you’re tempted to avoid the discomfort of working on a difficult task by fleeing from it, try the following meditation recommended by Leo Babauta of Zen Habits:

Now we’re going to do “pause training,” where instead of running from the discomfort, you pause. Breathe. Turn your attention to this discomfort — it might be fear, frustration, uncertainty, self-doubt, tiredness. Drop your story about this discomfort, and just notice how it feels physically, in your body. Where is this feeling of discomfort located? What quality does it have? You’ll notice that the discomfort actually doesn’t feel that bad, even though you habitually want to run from it. It’s just energy. It’s not actually good or bad, but just energy that’s in your body, one that you normally don’t want to have and normally judge as “bad.”

By pausing for a moment and sitting with your discomfort, instead of turning away from it, you’ll realize that it’s really not that bad. You can take it. At least until the timer goes off.

9. Know It Gets Easier – Enter the Productivity Zone

This post started with the Avoidance Zone. That’s that awful space in which you feel dread and anxiety because you know there’s a task you should be working on, but that you’re avoiding. In addition, you have nothing to show for your suffering.

Once you finally get started with the task, you enter the Discomfort Zone, and there’s still suffering. In fact, things may even feel like they’re getting worse, at least at first. You may feel confused, frustrated, and even more stressed than you felt before. However, now there’s a light at the end of the tunnel.

Once you’ve gotten started on an important task by following the tips above, keep working on the task on a consistent basis until you’re done. This may take a couple of hours, an hour-a-day for a few days, three weeks, or even several months. Just keep going until you’re done.

People often state that a lack of time is the reason why they don’t get to the high-impact items on their to do list. If this is you, realize that it’s just an excuse. The real reason you’re not getting to those important items is because you don’t want to do them, because they’re hard.

Get to work on the most important items on your to do list by following the ten tips above. Live your best life by doing the things you don’t want to do.

Next post: You Must Be Willing to Fail to Be Creative and Innovate

Previous post: 60 Small Ways to Improve Your Life in the Next 100 Days