Motivate Yourself By Appealing to Your Intrinsic Motivation 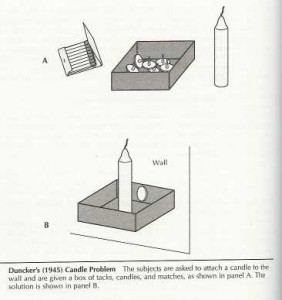 Motivation is the key to both achievement and creativity.

Although extrinsic motivation works for certain types of activities, one of the keys to creativity, happiness, and the realization of your full potential is the ability to be intrinsically motivated. There is much more on this in below.

I’m going to begin by explaining “the candle problem”, and you’ll be able to see how it relates to the subject of “intrinsic v. extrinsic motivation” when you read about Daniel Pink’s Ted.com talk in the next section of this blog post.

Psychologist Karl Duncker coined the term “functional fixedness”, which is a mental block that prevents people from using an object that has a particular function in a new and different way.

That is, people tend to have a bias as to what an object is used for, and this bias interferes with their ability to be able to notice or come up with other, novel uses for that object.

In Duncker’s famous 1945 candle problem, participants were given the following objects:

The solution to the problem is to stop thinking of the box of thumb tacks as a “container”, and to instead think of it as a “shelf” or “platform”. That is, the answer is to take the thumb tacks out of the box, use a couple of thumb tacks to nail the box to the wall, and then use the inside of the box as a candle-holder. (See the image at the top of this blog post for an illustration.)

Dan Pink– author of the bestseller “A Whole New Mind: Why Right-Brainers Will Rule the Future”

and of Drive: The Surprising Truth About What Motivates Us

–makes the case in a Ted.com talk titled “The Surprising Side of Motivation” for rethinking our reliance on external rewards as our motivation.

Pink begins his talk by referring to “the candle problem” explained above. He adds that a scientist named Sam Glucksberg, who is now at Princeton University, conducted an experiment which relied on the candle problem to demonstrate the power of incentives.

Glucksberg gathered his participants and told them that he was going to time them to see how quickly they could solve the candle problem. In addition, he added the following:

It took the second group–that is, the group that was offered the reward–three and a half minutes longer, on average, to solve the problem than it took the first group.  This goes against the widely held notion that if you want people to perform, you offer them prizes, bonuses, commissions, and so on as incentives.

An incentive that was supposed to sharpen focus and enhance creativity did just the opposite: it dulled thinking and blocked creativity. And this isn’t an aberration; this experiment has been replicated over, and over, and over again for nearly forty years.

Another Variation on the Candle Problem

Glucksberg later redid the same experiment, except this time, when he presented participants with the box, the box was empty and the thumb tacks were on the table beside it.  In other words, he made the problem easier because once the box wasn’t being used as a container  it took less mental flexibility to be able to assign a different function to it.

This time, the group that was being rewarded finished the task a lot faster than the other group.

The conclusion we can reach from these findings is that rewards–that is, extrinsic motivation–work well for tasks with a simple set of rules and a clear destination to move toward.  Rewards, by their very nature, narrow our focus and concentrate the mind.

But for the real candle problem–the one with the thumb tacks in the box–you don’t want tunnel vision: you want to be able to see what’s on the periphery; you want to be looking around; you want to expand your possibilities.

Pink concludes that routine, rule-based, left-brained work has become fairly easy to outsource and fairly easy to automate. This includes work such as the following.

Therefore, what really matters are the more right brained, creative, conceptual kinds of abilities, for which “if-then” rewards don’t work.

Here are some more conclusions reached by other researchers studying the effects of extrinsic motivation:

Obviously we need a whole new approach: an approach built around intrinsic motivation; around the desire to do something because it matters, because we enjoy it, because it’s interesting, and because it’s part of something important. It’s about the drive to do things for their own sake.

According to Pink, the new operating system revolves around three elements:

Aiming For The Flow State

The drive to do things for their own sake–instead of relying on extrinsic rewards–which Pink refers to in his Ted.com talk discussed above, is closely related to what Mihaly Csikszentmihalyi calls “flow”. Csikszentmihalyi describes flow as, “the holistic sensation that people feel when they act with total involvement”.

In the course of his doctoral research, Csikszentmihalyi noticed that the artists he was studying would spend hour after hour each day painting or sculpting with great concentration. They were obviously enjoying their work immensely.

And yet it was typical for them to lose interest in the painting or sculpture once it was done. Few of them expected their art to make them rich or famous. So why did they work as hard on their craft as an executive hoping for a promotion?

It was obvious that the activity of painting produced its own autonomous rewards; that is, the rewards of painting came from painting itself.

Here’s a quote from Csikszentmihalyi:

“To know oneself is the first step toward making flow a part of one’s entire life. But just as there is no free lunch in the material economy, nothing comes free in the psychic one. If one is not willing to invest psychic energy in the internal reality of consciousness, and instead squanders it in chasing external rewards, one loses mastery of one’s life, and ends up becoming a puppet of circumstances.”

If you’d like to learn how to reach the flow state, read my blog post “How to Enter the Flow State”.

Stephen King – I Write Because It Fulfills Me

In the quote below, taken from his book “On Writing”

, Stephen King explains that for him, writing is not about the money. He writes because it fulfills him.  This is a perfect example of doing as its own reward:

“Do you do it for the money, honey? The answer is no. Don’t now and never did. Yes, I’ve made a great deal of dough from my fiction, but I never set a single word down on paper with the thought of being paid for it… I have written because it fulfilled me. Maybe it paid off the mortgage on the house and got the kids through college, but those things were on the side–I did it for the buzz. I did it for the pure joy of the thing. And if you can do it for joy, you can do it forever.”

In order to enhance your creativity, prevent being “a puppet of circumstances”, beat procrastination, and live your best life, you need to take your focus away from extrinsic rewards–such as money, prestige, and so on–and, instead, place your focus on intrinsic rewards.

That is, your main reason for performing your work should be your enjoyment of the task itself, the feeling of satisfaction you get from being involved in a given project, and the sense of meaning you derive from carrying out your work.

1. 7 Ways to Supercharge Your Motivation
2. Three Ways to Silence That Pesky Inner Critic
3. Three Superb Exercises For Boosting Your Self-Esteem
4. The Three-Step Formula For Success

Next post: 50 Self-Esteem Quotes to Give Your Confidence a Boost