Five Navy Seal Mind-Tricks That Will Make You Mentally Tough 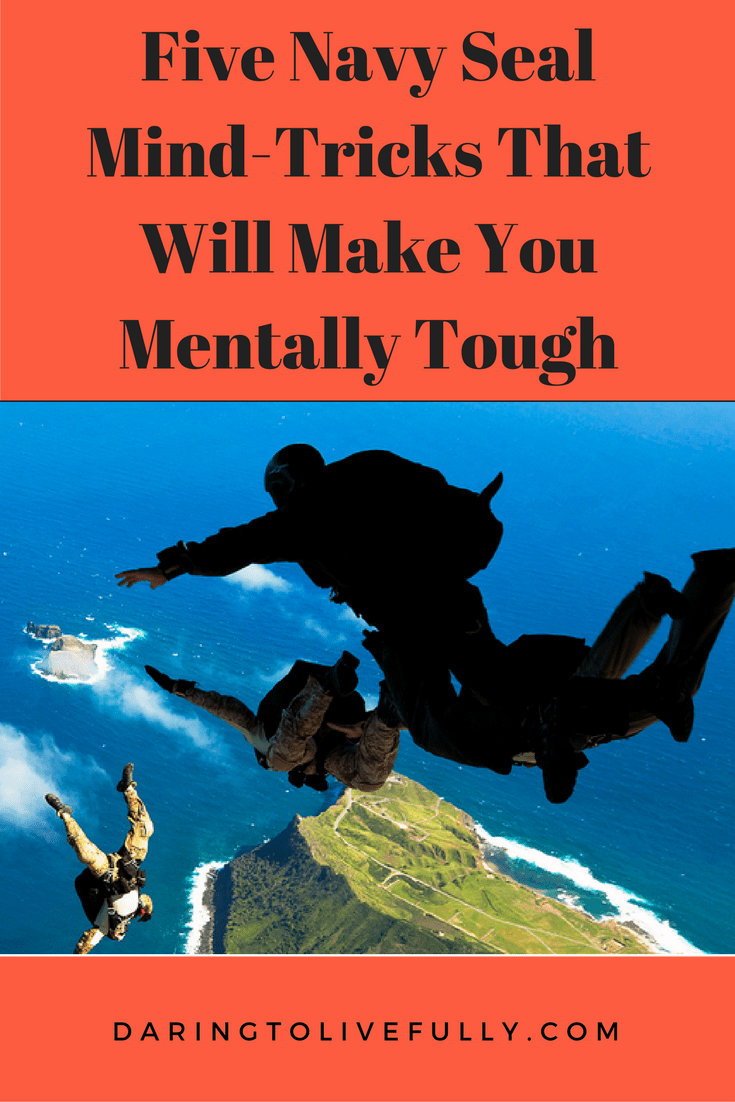 Those who succeed in life are mentally tough.

The Navy Seals, for those who have never heard of them, are the U.S. Navy’s principal special operations force. Their job is physically, emotionally, and mentally demanding. Most of the people who try out for the Seals don’t make it. What separates the successful candidates from those who are sent home is mental toughness.

The question then becomes, how can you develop mental toughness? And the answer is, by learning from the Navy Seals. Below you’ll find five Navy Seal mind-tricks that will make you mentally tough, so that you can get to work on your goals and keep going until you achieve them.

1. Up the Ante. Navy Seal Chad Williams explains that when you’re striving to achieve a goal, you should up the ante in order to make sure that you persist until you succeed. That is, ask yourself the following:

The more that’s at stake, the more likely you are to persevere. That is, the higher the ante, the more mental toughness you’ll be able to conjure up.

For example, let’s say that your goal is to run a 10K. Now suppose that you gave your sister $50 and told her not to give it back to you unless you completed a 10K. It’s very likely that you’ll quit before achieving your goal.

Why? Because training to run a 10K takes a lot of hard work, and $50 is a small stake. But what if you tell yourself that what’s at stake is the following:

Now that’s there’s more at stake, it’s a lot more likely that you’ll persevere, right? In fact, what Williams does is trick himself into believing that everything is on the line. He tells himself that if he doesn’t succeed in achieving his goal, his family will be executed.

Of course, most people won’t want to go that far. However, you could tell yourself things like the following:

It may seem a bit drastic, but by tricking your mind into believing that there’s a lot at stake you’re more likely to persevere until you achieve your goal.

2. Bounce Back Quickly From the Unexpected. Several Navy Seals have written books about their training and how they learned to be mentally tough so that they could survive the life threatening situations that they’re thrown into on a regular basis.

A while back I was perusing one of these books and I came across several useful nuggets. One of the things the book stated was that a vital component of mental toughness is bouncing back quickly from the unexpected.

When Navy Seals are preparing to go on a mission, they’re briefed on the situation that they’ll be going into. That is, they’re told what they’ll be facing and what to expect. For example, if they have to rescue someone from a ship they’ll be given information such as the following:

However, almost 100% of the time, things won’t go as planned. For example, once aboard the ship the Navy Seals may come across a wall where there isn’t supposed to be one. What does a Navy Seal do at this point? Well, they certainly don’t do the following:

If the Navy Seals were to do any of these things, they would almost certainly be killed. Therefore, what they do instead is to automatically include the wall in their calculations. More specifically, they do the following:

If you want to be mentally tough, you have to learn how to bounce back quickly from the unexpected. Trick your mind into overriding it’s tendency to argue with what’s happening by telling yourself the following: “Acknowledge; Accept; Adapt; Act.”

3. Train For Mental Toughness by Visualizing. One of the things that the Navy Seals are taught during their training is to visualize themselves successfully completing any task that they’re assigned over and over again. By using visualization they’re training their mind for what is to come. They’re winning in their mind in order to win in the battlefield.

Whatever goal you’re trying to achieve, visualize yourself persevering, getting over obstacles, shutting out your inner critic, and ignoring naysayers.

If you “see” yourself overcoming these hurdles beforehand, when you actually come across them in real life your mind won’t have to decide at that moment what to do. It will already know to keep going, regardless of circumstances, because that’s what it’s been trained to do.

To increase your mental toughness once you’re working to achieve your goal, train your mind beforehand by visualizing.

On the back of the photograph it said the following: “A man can only be beaten in two ways: if he gives up or he dies.” Mack turned that quote into the following mantra: “Not dead, can’t quit.”

He recited this mantra continuously during what remained of his training, and he credits it with helping him to succeed in becoming a Navy Seal. After all, it’s much easier to be mentally tough when your mind chatter is conducive to mental toughness.

Adopt the mental chatter of the mentally tough by constantly repeating Mack’s mantra or coming up with your own. Here are some ideas for mental toughness mantras:

When someone tries to get you to quit, or the voice in your head turns negative, recite your mantra. Trick your brain into thinking that the only option is to keep going by reciting your mental toughness mantra, over and over again.

5. Focus On What’s Right In Front of You. Most of us have very large goals. This may include goals such as the following:

When a goal is very large, it’s often difficult to stay motivated and mentally tough from the time in which you take the first step to achieve the goal, until you cross the finish line.

As Navy Seal combat veteran Brent Gleeson explains, the way you trick your mind to keep going when the finish line is far off in the distance is to divide your goal into tiny tasks. Then, just focus on the task that’s right in front of you.

For you it could mean the following:

One of the key ingredients to getting what you want from life is mental toughness. Apply the five mind-tricks above and you’ll develop the mental toughness that you’ll need to achieve your goals. Live your best life by making yourself mentally tough.