Seven Ways to Overcome Inertia and Get Yourself Unstuck 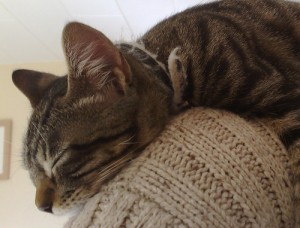 The law of inertia states that it is the tendency of an object to resist a change in motion. That is, an object at rest will stay at rest, unless it is acted on by an external force. The same is true of an object in motion.

What this means, when it comes to goal achievement, is the following:

When there’s a goal that you want to achieve, one of the biggest hurdles that you’ll face is overcoming inertia in order to get yourself to start moving in the right direction. The good news is that once you initiate movement, the law of inertia helps you to keep moving and to continue taking action. Below you’ll find seven ways to overcome inertia and get yourself moving toward the achievement of your goals.

Shock Yourself Into Action

Fifty years ago psychologist Kurt Lewin proposed a three-step model for change. Lewin argued that individuals are “frozen in place” and they tend to resist change, even when presented with favorable opportunities. Therefore, the following is needed:

Think of the following: you have a block of ice, but what you want is to have the ice frozen in a cone shape. First, you have to unfreeze the ice. Then, you mold the water into a cone. Lastly, you refreeze the water in the cone shape.

Likewise, when you want to make a change you have to start by unfreezing yourself; one way to do this is to shock yourself. You can shock yourself into taking action by asking yourself the following question: “What are the consequences if I don’t get started?” For example, if you’re overweight, the consequences of giving in to inertia instead of exercising and changing your diet include being at a high risk for having a stroke or a heart attack, as well as being more prone to diseases such as diabetes and cancer.

Here are some more questions which can shock you into action: “How much money am I losing by not getting started on this?” “How much interest would I be earning if I were investing all the money that I’m currently losing?” “What would that money mean for my retirement?”

If you can’t shock yourself into taking action, consider getting someone from the outside to do so. As an illustration, you could get a medical checkup. There’s nothing like a doctor telling you that your blood pressure and your cholesterol levels are through the roof—and that you’re running the risk of shortening your life span by several years if you don’t lose weight–to shock you into initiating an exercise program.

A business consultant can shock you into taking action by letting you know that if you don’t take action soon, your small business is likely to fail.

Produce enough short term wins—that is, quick wins—to energize the change and create momentum. It’s much more likely that you’ll be able to get yourself to move if your first goal is to “Run a 5K”, your second goal is to “Run a 10K” and so on, instead of setting the goal of “running a marathon” right off the bat.

Dangle a Carrot In Front of Yourself

You’ve no doubt heard the story of the farmer who got his donkey to pull a cart by hanging a carrot from a stick tied to the donkey’s head. Just like the donkey, one of our greatest motivators is the pursuit of pleasure. Choose an appropriate reward to give yourself once you’ve reached a certain goal, such as drinking a smoothie if you go out for a twenty-minute jog, or watching your favorite TV show after you’ve published a blog post.

Let the carrot give you the kick start that you need to get going on a goal which will later become intrinsically motivating. As an illustration, I’ve been jogging outdoors for two and a half years now. Although at first I had to promise myself rewards so that I would go out for a jog, now I do it because the activity of jogging is rewarding in and of itself.

Sometimes you can’t get started on a task because you don’t have enough fuel—or energy– to get yourself to act. If this is the case, fill your gas tank before you attempt to take action toward the achievement of your goal. As an illustration, if you want to start going out for a jog every day when you get home from work, but you’re too tired to do so, you could do the following:

Once your tank is full, it’s much more likely that you’ll have the energy that you’ll need in order to overcome inertia.

Create a Clear Vision of What You’re Trying to Achieve

The other day I watched a video on YouTube– which I can’t link to because I wasn’t able to find it again—on how to organize a messy desk. The method consists of sitting in front of your messy desk, closing your eyes, and then visualizing what you want your desk to look like. The exercise went as follows:

Continue in this way until you’ve created a vivid vision of what you want your desk to look like. Include emotions in your visualization; allow yourself to feel the satisfaction that comes from having a clear, organized desk. Then, open your eyes and allow this vision to pull you toward it. That is, allow the image that you created to pull you out of your state of inertia, and get started organizing your desk.

This exercise can be used in order to help you to overcome inertia, regardless of the goal that you’re trying to achieve.

Set the stage for the action that you want to take. For example, if you want to start going for a bike ride each morning before work, get your bike out and place it in an easy-to-access spot. Put your riding clothes and your helmet on a chair near your bed. It’s much easier to overcome inertia when everything that you need in order to carry out a particular action is laid out in front of you and ready to go.

To quote Ben Stein, “So many fail because they don’t get started – they don’t go. They don’t overcome inertia. They don’t begin.” Wake yourself out of inertia with the seven tips explained above. Remember that the first step is the hardest. Once you’re moving, just keep going.

Next post: Family Rituals and Traditions – Add Joy, Beauty, and Connection to Your Life