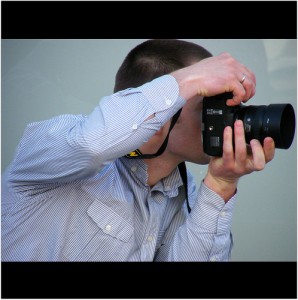 Richard Stomp is a Dutch innovation consultant, as well as the founder and Chief Wow Officer of “WowIdeas”.

A few years back, Richard coined the term “streetcombing” to describe a method he came up with for generating fresh ideas (you can watch Richard presenting his concept at the 2008 Creativity World Forum on YouTube).

Richard argues that people who constantly need to find fresh ideas should make it a point to go out on the street once a week and follow the six-step streetcombing process. This process is described below.

1.  First, you have to find a street. Preferably, look for an interesting street where new shops are popping up every week.  That is, look for a street that’s just starting to get hip. Take your camera with you.

2. As you’re walking down the street which you’ve chosen, watch and look out for anything that catches your attention.  Make sure to have the right attitude.  Richard argues that you need to keep an attitude which he calls “mind like a child”: forget everything you know, and be very curious.

3. The third step is to take pictures of everything that you find interesting.  Take lots and lots of pictures.  At this step you don’t stop to ask yourself why you’re taking a picture of a particular object or person, you just take pictures without judging, criticizing, or evaluating.

4. You go home and put all of the photographs on your computer.

5. The fifth step it to look through the photographs and ask yourself the following:

This is the hardest part of the streetcombing process. Here are three examples that Richard uses from his own streetcombing expeditions:

The photograph to the left shows some beer crates on a balcony. The beer crates were used to build a wall.  The concept to be derived from this photograph is the following: “putting objects to a different use than what they were originally intended for”.

The third and final example consists of designer sugar, which is depicted in the photo to the left.  Richard found sugar in a gourmet food shop near his office which is shaped in such a way that you can attach it to the edge of the cup.

The owners of the shop that sells this sugar added “design” to ordinary sugar cubes.  They charge a lot more for them than what you would pay at the grocery store for an ordinary lump of sugar; that’s what design does for you.

(The three photos above were taken from a PDF created by Richard, which you can find here).

6. The last step of streetcombing is to take the concept you found in Step 5, apply it to your own business, and start generating ideas. From our three examples above, you would ask yourself questions such as the following:

Richard explains that you can also go museum-combing, Ikea-combing, supermarket-combing, newspaper-combing, and so on.  He adds that ideas are everywhere; you just have to make a point of looking for them with the right attitude. Find fresh ideas by going streetcombing.

1. The Night Before Christmas and Stealing Like An Artist
2.Creativity Tools: 24 Free Online Creative Thinking Tools
3.57 Tips For Writers, From Writers
4. Stuck for An Idea? Try SCAMPER

Next post: Creating In the Dark – Your Sacred Dance