Creating In the Dark – Your Sacred Dance 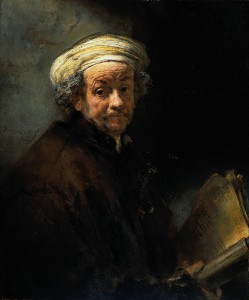 Seth Godin explains in his blog post “Opening Acts and Rock Stars” that rock stars have it good: the crowd chants for them before they’re even on stage, people know their songs and sing along excitedly throughout the concert, and they can even stop singing and the crowd will finish the lyrics for them. But what happens when you’re not a rock star, in fact, you’re not even the opening act?  You create anyway.

Below you’ll find seven examples of people who continued to create even when they were basically toiling in the dark.

In the 17th century the Netherlands was the most prosperous country in Europe. Rembrandt van Rijn–one of the most sought after Dutch masters–was born in 1606 and won acclaim from an early age. His ability to capture the essence of his subjects’ characters made him popular.

He was doing extraordinarily well with his paintings–and was making lots of money and living an extravagant lifestyle–when the Dutch art market collapsed. Rembrandt had mortgaged himself to the hilt and all of a sudden he had creditors banging on the door while his clients disappeared.

In 1658 Rembrandt was forced into bankruptcy. The courts sold his house and possessions. Living in near-poverty without a glimmer of hope that the Dutch economy would improve, he nonetheless kept right on painting. Some even argue that he produced his best work during this time.  (Source.)

Born in 1830, Emily Dickinson spent almost all of her life in the same house and yard in Amherst, Massachusetts.  Although she was always shy and withdrawn, for the last 25 years of her life she was a recluse, hardly ever leaving her home and grounds in Amherst.

Emily was an eccentric and an extreme individualist; she had several minor peculiarities, such as always wearing white and avoiding visitors.  Her two great passions were her garden and her poetry, both of which she cultivated for her own pleasure and not for public display.

She scribbled her poems on the backs of envelopes and odd scraps of paper and stored them in bundles in her room.  Only five of her poems were published during her lifetime. After Emily’s death her sister, Lavinia, found the hoard of manuscripts and arranged for them to be published.  Today Emily Dickinson is recognized as one of the world’s greatest poets.

The Brontë sisters were brought up by an eccentric father in the desolate and gloomy Yorkshire moors. From an early age they were responsible for their own entertainment.  They read voraciously and took long walks along the moors.

In 1845 Charlotte discovered by accident that Emily had been writing poetry, even as she and Anne had been doing unknown to each other.  The three sisters published their poems, each under a different pseudonym. Only two copies of their book of poetry was sold.

However, the lack of interest from the public in their poetry did not destroy their passion for writing, and each sister set about to write a novel.  After numerous rejections by publishers, each published a novel in 1847:

Today, all three novels are considered important works of literature.

Vincent Van Gogh – Sold Only One Painting During His Lifetime

Vincent Van Gogh’s paintings and drawings are some of the most recognizable art that exists today.  However, it is well-known that the Dutch Impressionist painter met with little success during his lifetime.  He was basically supported by his brother, Theo, and he sold only one painting while alive: “Red Vineyard”, which was sold in Brussels for 400 francs (roughly $350.00 at today’s rate).

As an example of what Van Gogh’s paintings are worth today, his painting “Portrait of Dr. Gachet” was auctioned off at Christie’s, New York, in 1990 and went for 82.5 million dollars.  It’s one of the world’s most expensive paintings.

Johann Sebastian Bach was a German composer and organist born in 1685.  Today he’s widely considered to be one of the greatest composers in the Western tradition.

However, although he was a famous organist in his lifetime, he was not particularly well known as a composer. In fact, his adherence to Baroque forms and contrapuntal style was considered “old-fashioned” by his contemporaries, and it was not until the early 19th century that there was a revival of interest and performances of his music.

For someone whose composing abilities were not truly appreciated during his lifetime, the following comment by scientist and author Lewis Thomas illustrates how much his music is venerated today.  Thomas once suggested how the people of Earth should communicate with the universe:

“I would vote for Bach, all of Bach, streamed out into space, over and over again. We would be bragging, of course, but it is surely excusable to put the best possible face on at the beginning of such an acquaintance. We can tell the harder truths later.” (Source).

Hugh Macleod of gapingvoid.com fame offers a solution for those who are creating in the dark but are not too keen on starving for their art; he calls it “the sex & cash theory”.   He argues that the creative person has two kinds of jobs:

Maybe you wait tables while going on auditions; or you play at weddings and bar mitzvahs while putting together a fantastic demo tape; or you work at a portrait studio and then take a month off each year and go photograph wild life in Alaska; or you teach English at the local high school while writing your novel.

Hugh adds that in the book “Soul Dance”, Bill Plotkin argues that there’s a Survival Dance and there’s a Sacred Dance.  The survival dance has to come first, because it provides the means of supporting yourself physically and economically. For most people, this means a paid job.

Once you’ve established a strong foundation for yourself through your survival dance, then you can start looking for clues as to what your sacred dance is : the work you were born to do.  Here’s how you know when you’ve found it:

“You know you’ve found it when there’s little else you’d rather be doing. Getting paid for it is superfluous. You would gladly pay others, if necessary, for the opportunity.”

That is, it’s the work you continue to get up and perform every day even if you lose everything you’ve worked for–like Rembrandt did–; or if your work gets called old fashioned, or worse, by your contemporaries as in Bach’s case; or if you can’t find a publisher like the Brontë sisters; or if you write your poems on the backs of envelopes like Emily Dickinson did.

Plotkin indicates in “Soul Dance” that once you discover your sacred dance and learn effective ways of performing it, the world will support you in doing so.  Then, gradually, your sacred dance will become what you do and you will no longer need your survival dance.

However, even if your work goes completely unappreciated by others–as in the case of Vincent Van Gogh’s paintings during his lifetime–continue to do your sacred dance, even if it’s just in your spare time and you are your only audience. No  matter what, create.

Next post: 99 Powerful Questions to Ask to Turbocharge Your Life