12 Tips for Being Punctual – How to Be On Time 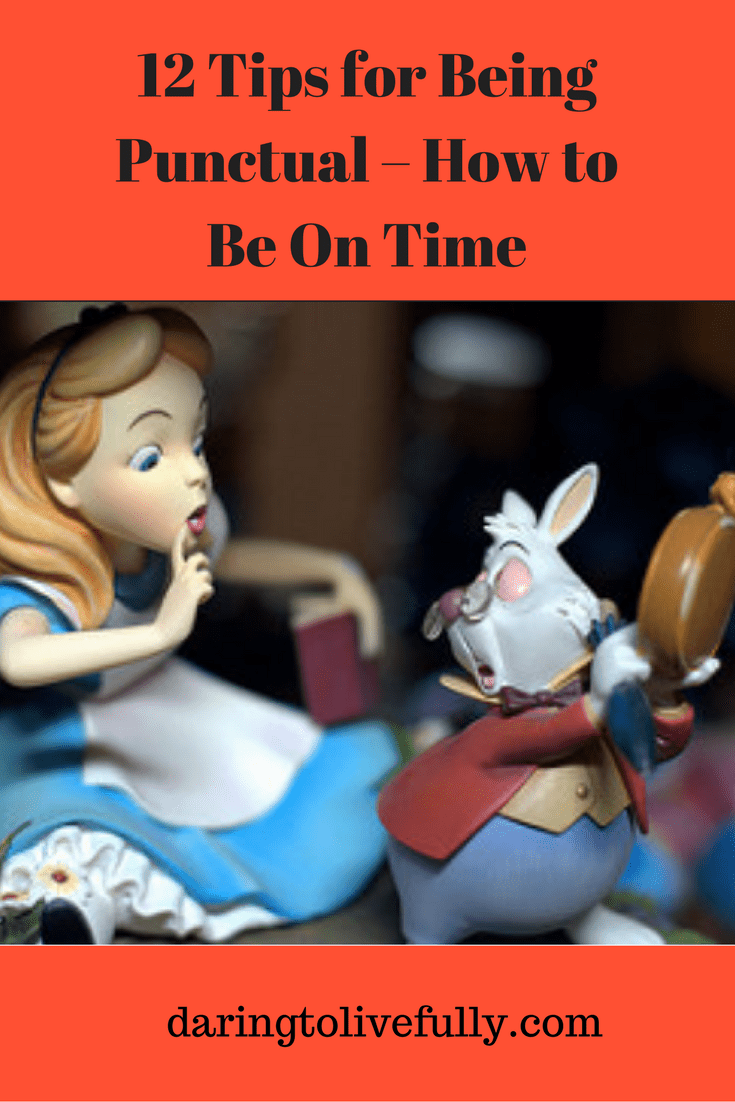 The importance of being punctual cannot be overstated.

Being on time matters; it matters a lot. However, a large number of people have a problem being punctual. In fact, surveys show that 15 to 20% of the US population is consistently late.

There are many negatives that go along with having a habit of being late. Here are a few them:

In addition, there are several different reasons why a person might have a punctuality problem. Some of these include the following:

Regardless of the reason why you have a tendency to be late, there are things you can do to adopt the habit of being on time. Below you’ll find 12 tips for being punctual.

1. Make Being Prompt a Priority. The first step in becoming punctual is accepting that you have a punctuality problem. Then, realize that it’s not a cute or quirky character trait. Instead, it’s a habit that’s having a negative impact on your career, on your business, and/or on your relationships.

Make a commitment to drop the tardiness habit and become punctual.

2. Know Why You Want to Be Punctual. Whenever you want to create a new habit, you need to be very clear on the reasons why you want to build that habit. The more reasons you have for wanting to adopt a new habit, and the stronger those reasons are, the more likely it is that you’ll be able to make the new habit stick.

Sit down with a pen and a piece of paper and ask yourself what you’ll gain by overcoming your tardiness habit and adopting a habit of punctuality, instead. You can write down things like the following:

Be very clear on the benefits that you’ll gain by being punctual, and then keep reminding yourself of those benefits in order to motivate yourself to become someone who’s prompt.

3. Track How Long Tasks Take. A lot of people who are constantly late have trouble determining how long it takes them to perform different tasks; even those tasks that they perform on a regular basis. For example, they might think that it takes them 25 minutes to get ready in the mornings, when the reality is that it takes them a lot longer than that.

If you fall into this group of people, do the following:

Once you’ve tracked how long it takes you to get ready in the morning, you may realize that it takes you 45 minutes to be ready to walk out the door, not the 25 minutes that you previously thought. If this is the case, accept that you need to start getting out of bed 20 minutes earlier in order to make it to your morning destination on time.

4. Use a Timer. Once you know how long it actually takes you to complete different tasks, use a timer to make sure that you adhere to those times. For example, if you know that it takes you three minutes to take a shower, set a timer for three minutes right before you step into the shower. Then, when you hear the timer ring, turn the water off and step out of the shower right away.

5. Be Ruthless With Your To Do List. One reason why you may have a tendency to be late is because you simply have too much to do. If your schedule is unrealistic, how can you possibly be on time for anything? It’s better to say “no” to something you don’t have time for than it is to say “yes” and then be an hour late.

6. Be Prepared to Be On Time. Preparation is one of the keys to punctuality. As an illustration, if you’re constantly late leaving your house in the morning, set up the night before. The night before, do the following:

As a second example, if you’re constantly late to meetings because you can’t find what you need, start preparing for meetings long beforehand. At least an hour before the meeting, gather all of the materials that you’ll need and place them on a corner of your desk or on a chair.

Always be prepared to be on time.

7. Give Yourself a Time Cushion. Even if you know how long it takes you to perform different tasks—such as driving to work or driving to a meeting across town—give yourself some extra time  in case of unexpected events. It’s a given that things are not going to run smoothly 100% of the time.

Here are some of the myriad of things that could go wrong as you try to get to your meeting across town:

One of the habits of people who are punctual is that they don’t just give themselves the amount of time that they need to get to where they’re going on time. Instead, they also give themselves a time cushion in case something goes wrong.

8. Be Prepared to Wait. People usually don’t like to be early because they feel that the time that they spend waiting for others is wasted time. That is, they prefer to be late rather than having some downtime. The key to overcoming this hurdle is to be prepared to have to wait. Waiting time doesn’t have to be wasted time.

The best way to avoid being late is to plan to be early. In addition, you can stop dreading being early by having a plan for how you’re going to use the waiting time.

9. Change Your Thoughts About Being Early. A lot of people think that those who are important keep others waiting. Therefore, being early is a sign that they’re not that important. And no one wants to feel unimportant.

However, being early is really a sign of being organized, having respect for others, and having good time management skills. And these are all character traits of important people. Keep telling yourself, “Important people are punctual”.

10. Always Leave on Time. The moment which ultimately determines whether you arrive where you’re going late or on time is the moment in which you walk out your door. Once you’ve reversed engineered the time at which you need to leave in order to arrive at your intended destination on time, force yourself to leave at that time.

Think of the following scenario: you’ve calculated that you need to leave by ten a.m. in order to get to your meeting with the board of directors ten minutes early. Therefore, at ten a.m. on the dot get up and go. Look at the following:

If you leave for your appointments on time–and you give yourself a time cushion in case something goes wrong–, you’re practically guaranteed to be on time.

12. Practice the Day Before. For important events, such as a job interview or if you have to give a presentation, practice how to get to where you need to be the day before. That way, you won’t lose time on the day of the important event trying to find the right address.

Make a good first impression when it comes to important events by practicing the day before so that you can be on time.

When you’re on time you’re prepared to do your best. Being punctual signals to others, as well as to yourself, that you can be depended on. Use the 12 tips above to become more punctual.

Live your best life by adopting the habit of always being on time.

Previous post: How to Do Less and Achieve More