How to Get Out of the Victim Mentality 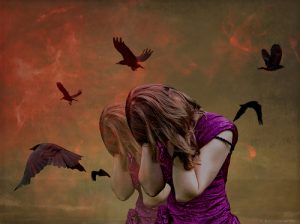 Most of us take on the role of victim at least once in a while. Adopting a victim mentality takes away our personal power, it limits our resourcefulness, and it leaves us feeling like we’re not in control of our lives.

“The Power of TED”, a book written by David Emerald, is about moving from a Victim Orientation to a Creator Orientation. The book sets forth a process for shifting from the disempowering view that you’re being acted upon by forces outside of yourself which you can do nothing about, to the more resourceful world view of seeing yourself as being in the driver’s seat of your life.

TED is an acronym for “The Empowerment Dynamic” which presents a way out of the Drama Triangle, a highly dysfunctional framework within which most people interact with one another. The Drama Triangle consists of the following three roles:

The Victim sees themselves as being at the mercy of a Persecutor–a person, event, or situation that’s having a negative impact on their life–, and they’re waiting for a Rescuer to come to their aid.

TED is a powerful method for getting out of a victim mentality–in which you feel helpless and taken advantage of–and becoming a Creator who asks “What do I want to happen?” and then takes baby steps to start moving in that direction.

If you’re ready to get out of the victim mentality and become a powerful Creator, or if you’re looking for a useful tool to help a loved one who’s always playing the role of the Victim, continue reading below.

The Drama Triangle is a model of human interaction first described by Stephen Karpman, MD. It describes three psychological roles (or ego states) which people often take in response to a situation: Victim, Persecutor, and Rescuer.

The three roles are very interdependent on one another. In addition, people shift in and out of playing each of these three roles. Within the same situation the roles that people play can shift; for example, when a couple is fighting and they each blame the other for whatever it is that they’re fighting about, they’re both trying to take on the role of the Victim and place the other in the role of the Persecutor.

Also, a person can be a Victim under certain circumstances but assume one of the other two roles in other circumstances. Needless to say, the Drama Triangle is a very unhealthy relationship dynamic. Below you’ll discover more about the Victim, the Persecutor, and the Rescuer.

“Frozen in fear, you avoid responsibility because you think your experience is beyond your control. This stance keeps you from making decisions, solving problems, or going after what you want in life.”

David makes a distinction in “The Power of TED” between victimization and victimhood. Victimization is a fact of life; we all experience it. Maybe someone cuts ahead of you in traffic all of a sudden, forcing you to brake abruptly or risk being in an accident. In that moment you’ve been victimized. In addition, there are people on Earth who live under severe victimization.

Victimhood, however, is a way of being; it’s a self-identity which is challenged by TED. When someone sees themselves as a victim, they’re giving in to a sense of powerlessness and hopelessness. Behind every Victim there’s usually a dream or desire in that person’s life that has been thwarted, and that they’ve given up on.

The Persecutor does not necessarily have to be a person. It can be a condition (such as an illness) or a situation (for example, a natural disaster). It’s anything that creates a sense of paralysis, hopelessness, and helplessness in the Victim.

When the Persecutor is a person, it’s someone who seeks to dominate, blame, and tear others down. What most Persecutors fear is their own victimization; they therefore adopt a strategy of “it’s better to dominate than to be dominated”. The Persecutor tries to maintain a one-up position so that they’re in the dominant role in the drama.

Just as with the Persecutor, the Rescuer doesn’t have to be a person. It can be anyone or anything that helps the Victim escape their feelings, including substance abuse and compulsive behavior such as gambling, workaholism, and so on.

When the Rescuer is a person, they do want to help, but they unintentionally reinforce the powerlessness of the Victim because of the approach that they use.  Their attitude toward the Victim is usually along the following lines:

This approach doesn’t help the Victim become empowered and more resourceful.  Rescuers often fear not being needed; they need Victims around them in order to feel a sense of meaning and purpose.

TED provides an escape from the toxic relationship dynamic of Victim-Persecutor-Rescuer that is present in the Drama Triangle.

The basic shift is in moving from a Victim Orientation to a Creator Orientation in which you own your capacity for creating outcomes in your life and choosing your response to life experiences.

Once you become a Creator you begin to see Persecutors as Challengers; that is, people and situations that have come into your life to help you learn and to spark growth and development. Rather than look for a Rescuer, which is what a Victim does, the Creator will often look for help and guidance from a Coach.

Each of the roles in the Drama Triangle has a TED antidote.  For the Victim it’s the Creator, for the Persecutor it’s the Challenger, and for the Rescuer it’s the Coach.

The central role in TED is the Creator, which represents an antidote to the Victim role in the Drama Triangle. As you make the shift from being a Victim to being a Creator you begin to develop the capacity to envision outcomes and take baby steps toward manifesting these outcomes.

In addition, a Creator knows that he/she always has a choice, regardless of circumstances. You can always choose how you’re going to respond.

An example used by David of someone who was a Creator is Victor Frankl. He was a young psychiatrist who spent years in three different Nazi concentration camps under the most disempowering, difficult, and challenging of life experiences. And yet while he was there he realized that he had a choice as to how he would respond to his circumstances.

Here’s a famous quote from Frankl that illustrates the power of the Creator: “Everything can be taken from a man but …the last of the human freedoms – to choose one’s attitude in any given set of circumstances, to choose one’s own way.”

The unconscious, deconstructive Challenger is someone who does not have the intent to help you grow, but rather to get something for themselves, even if it’s at your expense.

You therefore need to deconstruct what is happening and try to find the lesson that is hidden in the experience. That is, you have to change your perspective from “Why is this happening to me?” or “Why is this person doing this to me?” to looking for ways in which you can grow and expand as a result of this challenge.

The conscious, constructive Challenger is someone who’s a Creator and looks at you as a Creator, and they’re challenging you with the intent to help you grow.

We all need a little push once in a while to learn a new skill, acquire some knowledge or insight, make a decision we’ve been avoiding, or take action to move toward achieving one of our dreams. The Challenger–whether conscious or unconscious–can help us do that.

The Coach is the antidote to the Rescuer. The Rescuer reinforces the powerlessness of the Victim; they want to feel that the Victim needs them. The Coach, on the other hand, sees you not as a Victim, but as a Creator who is capable and resourceful.

What if You Find Yourself in the Middle of a Drama Triangle?

David explains in “The Power of TED”

that if you find yourself in the middle of a drama triangle, you need to take the following three steps in order to move toward empowerment:

1.Rule of Adulthood: You Have to Rescue Yourself
2. 5 Life Lessons From Motivation Mega Star Jim Rohn
3. Succeed by Cultivating a Growth Mindset
4. Dealing With Life’s Challenges – Life Is Like a Game of Chutes and Ladders