The Yin and Yang of Creativity 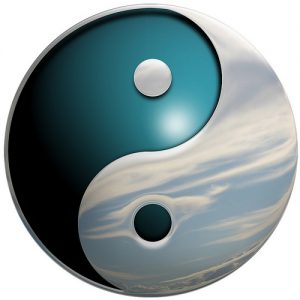 Creativity is about putting on your faded overalls, rolling up your sleeves, and punching in each day to do your work. And yet it’s also about pausing, taking breaks, and distracting yourself with tasks that are completely unrelated to your work.

Being creative is about going on excursions to find new ideas and refusing to censor or criticize anything that pops into your mind. However, later you need to sift through your bounty and judge each idea carefully to determine which ones merit doing the work necessary to turn them into reality.

In addition, creativity is about opening your mind, and then constraining it.

This is the yin and yang of creativity. There’s much more on this below.

Twyla Tharp, one of America’s greatest choreographers, writes about the creative process in her book, “The Creative Habit: Learn It and Use It for Life”. She claims that art is not inspiration; instead, it’s hard work. That is, it’s not a gift from the gods given to select individuals, but the product of preparation and effort. For her, discipline is essential for the flourishing of one’s creativity.

“My muse may visit. She may not. The trick is to be there waiting if she does.”

In addition, creativity is not about doing things halfway, but about immersing yourself completely in your work. You have to read everything you can on your subject matter; set up a daily work routine and stick to it religiously; refuse to be interrupted; and maintain a laser-like focus on your work.

At the same time, although discipline, focus, and hard work are essential to creativity, letting go is also an important part of the creative process.  Hemingway was a regular swimmer and is said to have gotten some of his best ideas while going for a swim.  In a similar vein, Julia Cameron writes in her book, “The Artist’s Way”, that Steven Spielberg claims some of his best ideas come while driving on freeways.

In my post, “Ray Bradbury’s Best Writing Advice“, I wrote about Bradbury’s advice to take breaks:

The first aspect of the yin and yang of creativity is the following: work hard, and then let go.

Creative ideas are largely the result of being able to take two separate elements and combining them into something new.  Without the right brain’s ability to see connections between seemingly unrelated objects, areas, or concepts, this process would not be possible.  At the same time, without the left brain’s ability to plan, analyze, and execute, new ideas would never live to see the light of day.

The second aspect of the yin and yang of creativity is the following: yin dreams up ideas, and then yang builds a frame around them.

Use Both Expansive and Constraining Creativity Techniques

There are two basic types of creativity techniques:

Expansive creativity techniques are intended to “open your mind” and encourage “free thinking”, such as idea generation and brainstorming sessions.  For example, you can begin a creativity session by releasing all of the preconceived ideas you have about a topic and questioning all of your assumptions. In addition, you can tell yourself that you have to come up with at least 100 ways to solve a problem.

Constraining creativity techniques, on the other hand, create constraints and force your mind to focus. Here are some examples:

The third aspect of the yin and yang of creativity is the following: you can be more creative both by being more expansive and by setting limits.

Yin and yang is about balance and harmony. Yang is forceful, while yin is receptive; yang constructs and implements, while yin is imaginative and poetic; yang pushes upward, while yin pulls back down . By using this same concept of ebb and flow in your creative life, you’ll be better able to both conceive and give shape to your creative ideas.

“Yang is as the day, turning into night, and yin the night preceding the day; the one is the force that drives the waves of the ocean forward, the other the force that draws them back so that they may go forward again.”

Be more creative by understanding and applying the yin and yang of creativity.

1. 25 Ways to Be More Creative
2. Nine Creativity-Sparking Tips
3. Stuck for An Idea? Try SCAMPER
4. The Night Before Christmas and Stealing Like An Artist

Next post: 12 Tips for Defeating Procrastination and Gearing Up for Action

Previous post: Five Ways to Make Friends and Get Along With Others