How to Increase Dopamine to Skyrocket Your Motivation 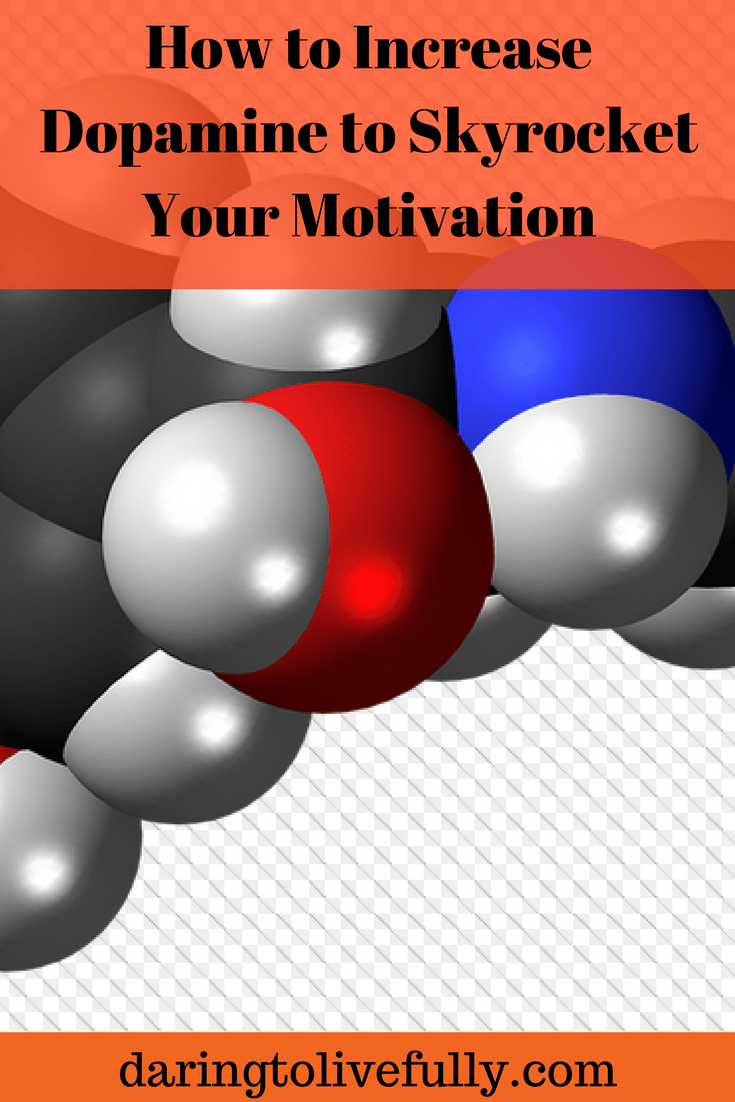 The neurotransmitter dopamine has long been associated with the pleasure we feel when we get something we want.  When you do pleasurable things, like eating a brownie or having sex, dopamine levels rise. They also rise when you set and achieve a goal.

However, new scientific evidence shows that dopamine begins to act before it was previously thought. It’s not just that we get a hit of dopamine as a reward after we’ve achieved something we want.

Dopamine has all the following effects:

I’m going to do two things in this post:

Here are six strategies to increase dopamine levels in your brain:

Dopamine is synthesized from the amino acid tyrosine. In other words, tyrosine is the building block of dopamine. We get tyrosine from food.

Foods that are good sources of tyrosine include the following:

Lowering stress is one of the best ways to get the dopaminergic system working efficiently. My stress reduction kit includes the following:

Here’s yet another reason take up jogging or get a gym membership: the brain releases important neurotransmitters during cardio-intensive exercise. These include serotonin and dopamine.

A sustained program of moderate- to high-intensity exercise can boost overall levels of essential neurotransmitters and enhance mental function, brighten your mood, and improve sleep quality. So, the next time you need a dopamine hit, put on your running shoes and hit the pavement.

As with exercise, meditating has many benefits. If you want yet another reason to jump on the meditation bandwagon, here it is: meditating has been shown to raise levels of dopamine.

Fortunately, meditating doesn’t have to be complicated. In fact, it can be as simple as repeating a mantra.

I’ve written before that although a lot of people think that having a hobby is a waste of time, there are many ways in which engaging in a hobby can be incredibly beneficial.  Some of these benefits include reducing the incidence of dementia, boosting your brain power, and reducing anxiety.

Yet another benefit of engaging in a hobby is that it can allow you to reach the flow state–that state in which time seems to stand still and you feel at one with what you’re doing. One of the reasons that reaching the flow state can be so incredibly blissful is that when you’re in the flow your brain releases the pleasure molecule, dopamine.

Not sure what hobby to take up? I recommend doodling or drawing.

Why do people spend so much time listening to music? Because it’s highly pleasurable to do so. And now we know that one reason for this is that our brains release dopamine when we listen to music we enjoy.

I love listening to Bach and Rachmaninov. Also, right now I can’t get enough of a Spanish singer named Miguel Bosé who was popular in the late 1970s and the early 1980s. What music do you love? When you want to increase your dopamine levels, turn that music on, crank up the volume, and enjoy.

Get a Dopamine Boost to Finish a Specific Task

I’m going to share something with you. There are times when I get an idea for a blog post and I’m able to sit down, get to work, and write the post quickly and almost effortlessly.

But then there are times when I have trouble getting to work. I sit down to write, but then I’m distracted and start doing things that–as a procrastination expert–I know full well that I shouldn’t be doing. Here are some examples:

What do all of the things above have in come? They all give me a tiny dopamine shot each time I do them. So, if I want to stop doing them, I have to find another way to get my dopamine fix. Here’s what I do (you can apply these five steps to any task or goal that you want to get to work on):

Setting a clear goal that is challenging but doable is a great way to increase dopamine levels. Whenever I sit down to write a blog post, I set a clear goal such as the following:

Write a post on motivation and dopamine that clearly allows my readers to see how dopamine influences motivation; the post will also give them easy-to-understand strategies that they can use to increase dopamine levels in their brain, thus boosting their motivation and improving their ability to achieve their goals.

2. Imagine the Joy Of Completing the Task

I then take a moment to visualize having finished the blog post. I imagine the satisfaction that I’ll feel once the post has been published on my site. This gives me another shot of dopamine.

3. Break the Task Down Into Small Bits

A while ago I created a blogging checklist for myself. I took the large task of “write a blog post” and I broke it down into many smaller subtasks. These subtasks include things like the following:

You get the picture. That way, I can tackle each subtask as an independent unit and get a small increase in dopamine each time I complete one of the subtasks and gleefully cross it off my checklist.

Each of the items on my checklist has a time limit next to it. That way, I have micro-deadlines for each item, which keeps me focused and turns the activity into a game.

Can I research and explain the first point which supports the thesis of the blog post in twenty minutes? Well, I’m certainly going to do my best to do so. The challenge also gets my brain to release more dopamine.

5. Sit Back and Smile

The last step is to publish the blog post. I love the feeling I get when I look at a brand new post published on my site. Then, I send out an email letting my readers know that there’s a new post, and I watch as people click over to read it (on my real-time web analytics).

Finally, I sit back and bask in the dopamine hit I get from having achieved the task of having published yet another stellar article on my blog (He, he, he).

Dopamine is often referred to as “the motivation molecule”. Put this neurotransmitter to work for you and you’ll have more motivation in no time. Live your best life by following the strategies above to increase dopamine levels in your brain.

Next post: A 16th Century French Philosopher on How to Increase Self-Esteem: Michel de Montaigne