How to Reframe Your Life Stories to Create a Better Life 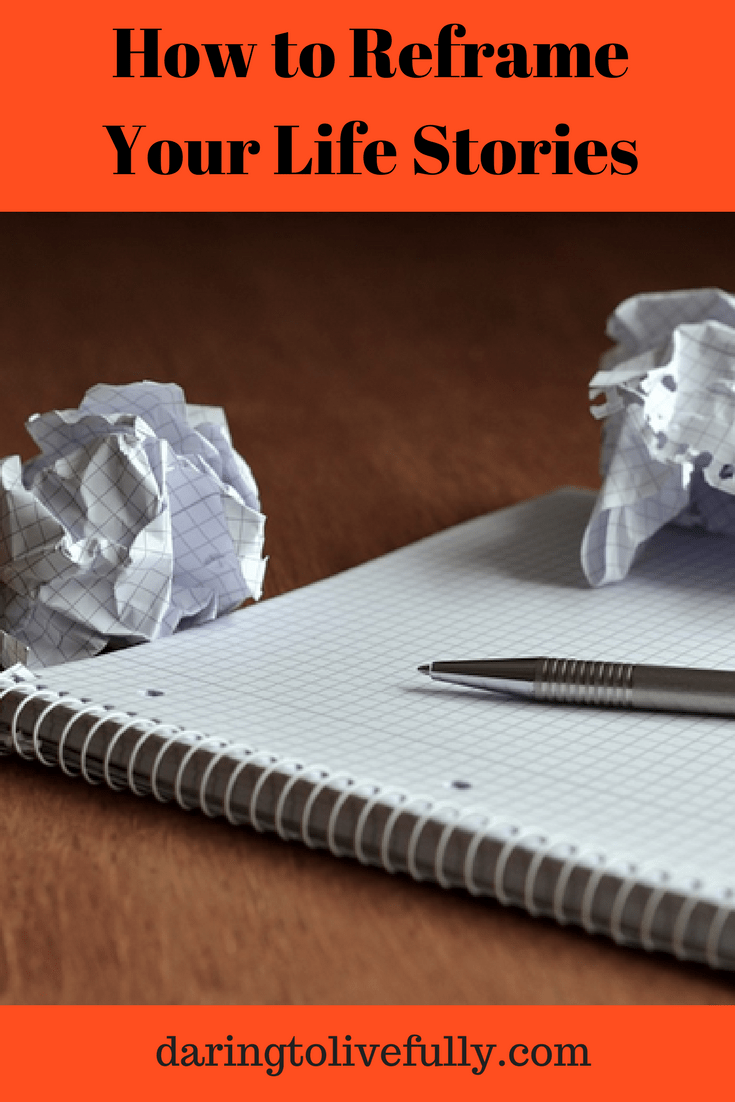 The stories you tell yourself create your life.

We all tell ourselves stories. The stories that we tell ourselves establish our self-identity, and the “kind of person” that we are.  They also give our lives meaning, help us to make sense of the world, and guide our actions.

One of the stories that I tell myself took place during Christmastime here in Panama some years ago, and it goes like this:

It was three days before Christmas and “La Arrocha”—a popular pharmacy with a large toy section—had set up a gift-wrapping station right outside the store. There was a frenzy of activity as shoppers selected the gift-wrapping paper and bows that they wanted and the clerks wrapped dolls, Lego sets, snow cone machines, and so on.

I had bought some toys for my young relatives, and I was standing in line waiting for them to be wrapped. As all this was going on, there was a little beggar girl walking around excitedly watching everything that was going on. She would stare at the toys and the colorful paper they were being wrapped in, with a big smile on her face.

People were stepping around her and acting like she wasn’t there. Judging by her tattered clothing and unkempt appearance, it was abundantly clear that the little girl wasn’t getting anything for Christmas. At that moment, I thought to myself: “Every child should get a toy for Christmas”.

When my gifts had been wrapped, I walked over to the corner the girl had moved to. I handed her one of the gifts I had bought–a Barbie–and I wished her a Merry Christmas.

This story tells me that I’m kind. And when something happens that reminds me of the story, I feel good about myself. However, there are other stories that I tell myself where I don’t come out looking so good. In fact, some of my stories make me feel unhappy, uncomfortable, and even ashamed.

The stories that we tell ourselves can be limiting— such as, “I’m not a math person”–, and they can even be destructive. There are a lot of people who tell themselves stories that make them think: “I’ll never amount to anything”; “I’m a loser”; or “I ruin everything I touch”.

We need to start paying attention to the stories that we tell ourselves and to others. The key is to remember that we’re the storytellers–the narrators–and we can spin our stories in any direction we want. That is, we can reframe our stories so that they serve and support us.

After all, it’s not the objective world that influences us, but how we represent and interpret the world. In other words, what really matters is not what happens to us, but the stories that we tell ourselves about what took place.

Below you’ll find 4 ways to reframe your life stories so that you can start creating a better life for yourself.

1. Write Through a Challenging Problem

Dr. James Pennebaker– a research psychologist at the University of Texas –is the author of Writing to Heal: A Guided Journal for Recovering from Trauma & Emotional Upheaval. In his book he describes the method he developed over many years  which consists of using writing exercises to help people deal with difficult events in their lives.

To try Pennebaker’s method, do the following:

When people try this exercise what they write at first is often jumbled and disorganized. But then the story starts to take shape, and they’re able to make sense of the event and give it meaning. Ask yourself what you learned from the experience, and what you lost and gained. Also, examine how these events from your past will guide your thoughts and actions in the future.

Studies show that people who engage in expressive writing generally report feeling happier and less negative than before applying the writing exercise.

Please keep the “Flip Out Rule” in mind. If you feel that a topic is simply too painful for you to write about, and that you’ll “flip out” if you do, then don’t write about it. Write about something else and see if you can write about the painful topic at some future date.

Reframe your life stories by writing through challenging problems.

2. Write About the Present Chapter of Your Life

Kim Schneiderman is a psychotherapist, columnist and workshop facilitator in New York City. She’s also the author of “Step Out of Your Story: Writing Exercises to Reframe and Transform Your Life”. She argues that there are many ways to tell the same story, and we should always try to find the best version of the story–one that makes us feel hopeful.

Here’s a quote from her book:

“Stuck in the same old story, many of us remain so entrenched in tales of victimization and martyrdom that we can scarcely imagine an alternate, positive or redemptive reading of the text of our lives. Perhaps because we have been taught to view life through one particular lens, we simply don’t see other, more inspiring versions of our tale that could liberate us.”

Think of a challenge you’re currently facing and write a story about it.  Schneiderman recommends that you write in the third person. That is, instead of using the pronouns “I” or “me”, use “he” or “she” and use your name.

Start off by defining your protagonist (you, of course). Write 5 to 7 sentences about yourself and answer questions such as the following:

Now think of a difficult situation that you’re currently facing. What do you want? What is the outcome that you’re after? What have you done so far to try to achieve that outcome?

Then, identify the antagonist (the villain). Every story has an antagonist, or an opposing force that’s creating conflict in the life of the protagonist or getting in their way. It can be a person, circumstance, or event; it can even be an aspect of the protagonist’s personality. Here are some examples:

Finally, think of how the conflict may be resolved. Also, ask yourself how the situation that you’re currently facing can help you to learn and grow. Then, get to work on creating the ending that you want for your story.

If you’re currently telling yourself a story in which you’re a victim, reframe the story. Remind yourself of the following:

And remember, until you get what you’re after, the story isn’t over.

3. Change an Unempowering Story to An Empowering One

Michael Hyatt—a popular blogger and author–explains that at the age of 29 he became vice-president of marketing for a large publishing house. It was a huge step up, especially for someone so young, and he felt that he was in over his head. Michael was convinced that the powers-that-be would soon discover that they had made a mistake by promoting him.

Whenever he had to attend a meeting, Michael would sweat profusely and his hands would get ice cold. He would do everything he could to try and hide these symptoms of his nervousness. This included doing things like the following:

However, Michael soon realized that the root of his problem lay in the story he had come up with. By telling himself that he was a fake and that he would soon be found out, he was stressing himself to the point that his body was giving him away. That’s when he decided to change his story.

Michael started telling himself that his youth gave him an advantage since he was energetic and had fresh, novel ideas. In addition, he was a fast learner and a hard worker, and any mistakes he made he would simply learn from and correct along the way.

Once he started to tell himself an empowering story, instead of a disempowering one, Michael was able to relax in his new position. His bodily symptoms stopped, and he ended up doing a great job.

Ask yourself the following:

Reframe your life stories by changing disempowering stories into empowering ones.

Your mind is always observing you. If you want your mind to start telling positive stories about you, go out and do something positive. Look at the following:

Always be on the lookout for opportunities to create positive stories about yourself and your life.

Reframe your life stories with the four techniques explained above. Live your best life by telling yourself better stories.