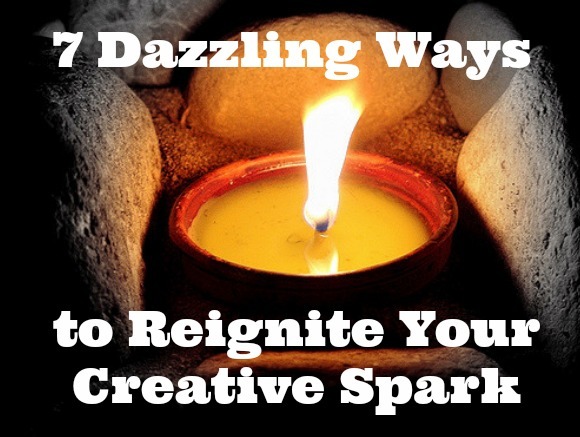 Sometimes your creative spark goes out, and needs to be reignited.

In Greek mythology, Prometheus is a Titan who stole fire from Zeus and gave it to mortals.  This gift of divine fire unleashed a flood of inventiveness and productivity in humanity. However, sometimes, that fire goes out.

If you currently feel like you’re sitting in a dark cave and the fire of creativity refuses to be ignited, below you’ll find seven ways to reignite your creative spark.

1. Toss In the Kitchen Sink

Life coach Martha Beck recommends that when you need to ignite your creativity in order to solve a particular problem, that you toss in the kitchen sink.  The process is the following:

Following this process allows the right-brain hemisphere to step in and help you solve the problem. Here’s an example Beck uses:

“Laura wanted to travel but hated kenneling her yellow Lab, Buster. She also had partial hearing loss due to meningitis. One day when she had trouble hearing a flight attendant—ping!—she realized she could train Buster as a hearing service dog. Now they fly the skies in style together.”

2. If You See a Good Idea, Bend Down and Pick it Up

A lot of the time, when we have an idea we stop ourselves from pursuing it by saying the following: “If this were a good idea, someone would already have thought of it”. However, that’s not always the case.

There’s a story of a man who was walking down the street with an economist. As they were walking along he noticed a $10 bill on the sidewalk. Since the bill was closer to the economist, he thought that the economist would stop and bend over to pick it up. Instead, the economist walked right past the $10 bill.

How many times have you had the spark of a great idea, but you’ve neglected to follow through on it because you told yourself that if it were a good idea, someone else would already have thought of it? Stop assuming that all the great ideas are already taken.

If you think you see a good idea, bend down, pick it up, and run with it.

3. Release Your Need for Recognition

A lot of the time, our need for some extrinsic reward, or external validation for our work, chokes our creativity. Here are some examples:

You need to release the focus on an external reinforcement of your work, and, instead, allow yourself the freedom to focus on creating for the sake of creating itself.  Charles Johnson says this beautifully in the following quote:

“I think a real writer simply has to think in other terms. Not, ‘Will I get in this magazine?’ ‘Will I get the NEA next year?’ but whether or not this work is something he would do if a gun was held to his head and somebody was going to pull the trigger as soon as the last word of the last paragraph of the last page was finished.

Now if you can write out of the sense that you’re going to die as soon as the work is done, then you will write with urgency, honesty, courage, and without flinching at all, as if this were the last testament in language, the last utterance you could ever make to anybody.

If a work is written like that, then I want to read it. If somebody’s writing out of that sense, then I’ll say, ‘This is serious. This person is not fooling around. This work is not a means to some other end, the work is not just intended for some silly superficial goal, this work is the writer saying something, because he or she feels that if it isn’t said, it will never be said.’ Those are the writers I want to read. And there are not many twentieth-century writers like that.”

4. Who Cares What They’ll Think

Sir Ken Robinson argues in his book “The Element: How Finding Your Passion Changes Everything” that we need to look for that “sweet spot” in which our talent meets our passion; that’s our element. One of the chapters in the book is titled: “What will they think?”

In that chapter, Robinson explains that many times we don’t discover what we truly love and are talented at because of self-censorship. We’re afraid to go against the grain and be ridiculed by society.

In addition, opinions offered by friends and family–often well intentioned–can derail us from pursuing what we’re uniquely good at. I would argue that this same fear of what others will think can derail our creativity.

Robinson uses Brazilian novelist Paulo Coelho as an example of how people can find disapproval for trying to follow their passion, if that passion is not in line with what is considered a traditionally acceptable career. Coehlo–author of “The Alchemist” and one of the world’s best-selling authors–wanted to be a writer since he was a kid.

Unfortunately, his parents greatly disapproved of this since it was not in line with what was expected from the son of people of their station. Yet Coelho persisted. When Coelho was approaching the age at which most people go to college, he wouldn’t let go of the idea of being a writer.

At this point, his parents had him committed to a mental institution. Coelho was given three sessions of electroconvulsive therapy to try and get the idea of being a writer out of his head. Fortunately, it didn’t work, and he turned into the Paulo Coelho we know.

Worrying about what others will think is like throwing a cold bucket of water on your creative spark.  If you’re trying to ignite your creative spark, one of the best things you can do is to follow Paulo Coelho’s lead and do what you feel you need to do, despite what anyone else may think.

Create a shrine filled with objects that inspire you to create every time that you look at them. In the book “Creative Sparks”, Jim Krause explains that a shrine is:

Your shrine could be a place on a shelf or in a cabinet. It can include books, beads, letters, candles, small statues, artwork, images, photos, and so on. Look for things that remind you of your creative-self.

Eric Maisel–a psychotherapist and creativity consultant–is the author of “Affirmations for Artists”. The book is arranged alphabetically by subject (Ambition, Anxiety, Day Jobs, Depression, Failure, Fear, Inspiration, Success, and so on), with one page devoted to each subject.

Each page includes quotes from famous artists, a short paragraph to consider, and an empowering affirmation. Here’s an example of one of his affirmations (Ambition):

“I am ambitious, I want; I want so very much! I do not deny my ambitiousness; but I affirm that I will temper it with an appreciation of other things. There is both the mountaintop to aspire to and the patch of plain earth right here to love. I will not put aside my ambitions, but neither will I fail to embrace all the rest that life has to offer.”

And here’s another one (Inspiration):

“I believe I create for myself when I honor my artist’s nature and diligently practice my craft. I will work whether I feel inspired or not: I know that if I labor with an open heart and an open mind, inspiration will come. I am ready to create it, receive it, and be swept away by it.”

Create your own set of affirmations to help you reignite your creative spark.

J.J. Abrams, co-creator of the hit TV show “Lost” and director of “Mission Impossible III”, revealed in a TED.com talk that when he was a kid he would often go to the Lou Tannen Magic Store in New York City. One time he went to the magic store and bought a “mystery box” ($15 buys you $50 worth of magic).

A mystery box is a box full of items–in Abram’s case, full of magic tricks–without the buyer knowing what these items are at the moment of purchase. Even though Abrams bought his mystery box decades ago, and he keeps it on a shelf in his office, he has never opened it.

For him, the mysteriousness of the box far outweighs the value of any magic tricks it may contain. The box–which has a giant question mark on one side–represents infinite possibility, hope, and potential.

Abrams explains that mystery is a catalyst for imagination. Stories are mystery boxes. In TV, the first act is called the teaser. It raises questions which are going to be answered during the rest of the show. Ask yourself how you can use mystery to spark your creativity. What’s your mystery box?

Live your best life by reigniting your creative spark. Start with the seven suggestions above.