10 Exercises to Help You Seize the Day: Carpe Diem! 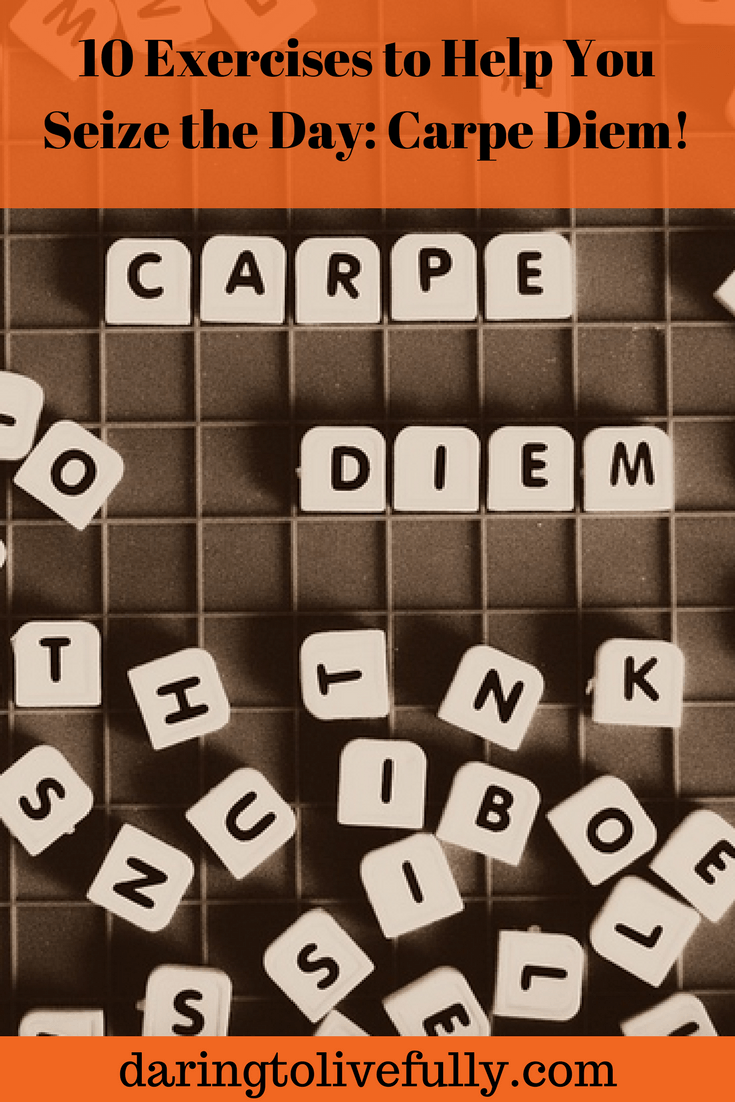 Grab life by the horns.

The words “Carpe Diem” were popularized by Mr. Keating—an English teacher played by Robin Williams—in the 1989 film Dead Poets Society. He borrowed the phrase from the Roman poet Horace, who once wrote:

“As we speak cruel time is fleeing. Seize the day, believing as little as possible in the morrow.”

Here are other ways to express that same adage:

Steve Jobs reminded us that we have limited time on this planet in his famous 2005 Stanford commencement speech:

“Remembering that I’ll be dead soon is the most important tool I’ve ever encountered to help me make the big choices in life…because almost everything — all external expectations, all pride, all fear of embarrassment or failure — these things just fall away in the face of death, leaving only what is truly important. Remembering that you are going to die is the best way I know to avoid the trap of thinking you have something to lose.”

I’m not telling you all of this to make you panic or have an anxiety attack, but simply to remind you that you won’t live forever. And this reminder is a good thing, because it can inspire you to stop living life as a spectator. Instead, get out there, step up to the plate, and swing as hard as you can.

Below I’m going to share with you 10 exercises I came up with to help you seize the day. The methodology I’m going to use is the following:

“Forget regret, or life is yours to miss.” – Jonathan Larson

We all have regrets about things we wish we’d done differently in the past. As an illustration, the other day I was watching a TED Talk by Lisa Bu in which she explains that she really wanted to become a Chinese opera singer.

Unfortunately, Bu’s parents did not support her dream. By the time Bu was fifteen years old, she realized that she had not gotten the early start that she would have needed to become a Chinese opera singer, and that her dream would never come true.

However, instead of resigning herself to a life of second-hand happiness, here’s the attitude that Bu chose:

“I have come to believe that coming true is not the only purpose of a dream. Its most important purpose is to get us in touch with where dreams come from, where passion comes from, where happiness comes from. Even a shattered dream can do that for you.”

Seize the day by turning your regrets into motivation to pursue a different dream.

“A journey of a thousand miles begins with the first step.” – Lao Tzu

There’s almost certainly an important goal that you’ve been putting off because it will take a lot of effort to achieve it. That is, it’s a one-thousand-mile goal. Stop for a minute and remind yourself that if you don’t start right now, there’s a high likelihood that you’ll never achieve that goal.

The first thing you need to do is to chunk down your goal, so that you can start tackling it, one step at a time. In my post, How to Chunk Down Goals Into Manageable Pieces, I explain that there are three methods I use to chunk down goals. These three methods are the following:

Seize the day by deciding which of these three methods you’re going to use to chunk down your one-thousand-mile goal. Then, identify the first step. Draw a foot step like the one below and write down in the middle of it what your first step is going to be: 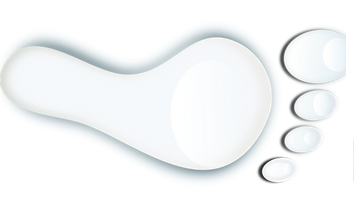 3. Break Out of Your Comfort Zone

A sure way to allow opportunities to pass you by and to fail to make the most of your life is to remain stuck in your comfort zone. Your comfort zone is a cage in which the bars that keep you locked in consist of your current habits, rituals, practices, and beliefs. You hold the key to the cage, but you stay in it voluntarily because you feel safe in there.

You can expand your comfort zone, and still feel safe, by following an approach which I explain in my post, 8 Ways to Break Out of Your Comfort Zone.  Basically, instead of breaking out of the cage, you’re just going to make it a little bit bigger by pushing the bars out slightly. Do things like the following:

By slowly, but consistently, expanding your comfort zone, you’ll begin living a fuller and more vibrant life. That is, you’ll get better and better at seizing the day.

“If you were going to die soon and had only one phone call you could make, who would you call and what would you say? And why are you waiting?” ~Stephen Levine

My paternal grandmother–whom I adored–passed away in March. She had been very ill for months, so we knew she didn’t have much time left. Three days before she died I went to visit her, and I made sure to tell her how much I loved her. Although I was very sad when I heard she died, at least I felt some comfort from the fact that I had gotten the chance to say goodbye.

Is there someone you need to visit or call? Who would that be? What would you say? Now call or visit them.

“Your time is limited, so don’t waste it living someone else’s life. Don’t be trapped by dogma, which is living with the results of other people’s thinking. Don’t let the noise of others’ opinions drown out your own inner voice. And most important, have the courage to follow your heart and intuition, they somehow already know what you truly want to become. Everything else is secondary.”– Steve Jobs

If you’ve been living the life that someone else wants for you, instead of your own, it’s time to seize the day by shutting out the voices of others and tuning in to your own inner voice. Ask yourself the following:

In the Harry Potter series by the fabulous J.K. Rowling, Harry stumbles upon a mirror which he later discovers to be the Mirror of Erised. It’s a mirror that shows the user his or her heart’s desire. The mirror has an inscription; when the inscription is reversed it reads:

Which, by changing the spacing and punctuation, reveals:

I show not your face, but your heart’s desire

Then, start following your heart’s desire. Or, as the kids would say: you do you.

6. Go On an Adventure

“One way to get the most out of life is to look upon it as an adventure.” ~ William Feather

Seize the day by going on an adventure. An adventure is something that’s novel and exciting. It can have an element of peril in it, such as going bungee jumping, but that’s not essential. What matters is that it’s something that arouses enthusiasm and eagerness.

In addition, it often involves exploring unknown territory. However, that doesn’t necessarily mean that you have to visit a far-off land. You can simply take a day trip to a neighboring city, or to a part of town that you’re curious about and have never been to before.

Lastly, going on an adventure can be very expensive, or it can be very cheap. There are even some adventures that are free!

“A year from now you may wish you had started today.” ~ Karen Lamb

Procrastination is the opposite of seizing the day.  While seizing the day allows you to make things happen and get sh*t done, procrastinating is all about wasting precious minutes and hours, and allowing your days to slip by with little or nothing to show for the passage of time.

Once you have your letters, go to the site futuremeorg and send both letters to yourself. You’ll be receiving both letters in one year’s time in your email box. Which one will turn out to be true? It’s entirely up to you. Seize the day by overcoming procrastination.

8. Carve Out Some Time

“You will never find time for anything. If you want time you must make it.” ~Charles Buxton

As I was doing the research for this blog post I came across a device called the Tikker. It’s a watch that figures out when you’ll probably die–based on an questionnaire that you fill out–and then counts down to that date. That way you’ll constantly be aware of how much time you have left on earth.

The irony that watch reminds me of is that people claim that they don’t pursue their dreams because they don’t have the time, until one day their time really does run out. When something is really important to you, you make time for it. I never tire of saying that whatever your dream is, all you need to accomplish it is to carve out one-hour-a-day to work on it.

Right now, think of a goal that you’ve been postponing because you claim that you don’t have the time to work on it. Then, come up with at least three ways you can start carving an hour out of your day. Do the following:

Seize the day by carving one hour out of each day for yourself.

9. Get to Work On Your Legacy

“Try and leave this world a little better than you found it, and when your turn comes to die, you can die happy in feeling that at any rate, you have not wasted your time but have done your best.” – Robert Baden-Powell

We all want to leave our mark on this world — that is, leave a legacy. Even if leaving a legacy is something that you’ve been putting off, as long as you’re still alive there’s something you can do about it.

Once you’ve decided on your legacy, don’t let another day go by without getting to work on it. Do the following:

Seize the day by getting to work on your legacy.

10. Add Laughter to Your Day

“The most wasted of all days is one without laughter.” e.e. cummings

Seizing the day isn’t just about being yourself, achieving your goals, and living a meaningful life. It’s also about finding joy in every day. And one of the best ways to make life more joyful is by laughing more. Every day, find something that makes you laugh.

If you haven’t laughed so far today, I found this tweet hilarious. You can also go through Julio Torres’ tweets (a  Salvadoran comedian who lives in the US, and who is absolutely hilarious).  Here’s one of his tweets:

I also love the British comedian Eddie Izzard. Here’s a great 6 minute routine in which he talks about learning French:

Create a list of 10 ways in which you’re going to laugh more each day. If you need some inspiration, go through my post How to Laugh More — 22 Ways to Bring More Laughter Into Your Life. Make the most of each day by adding play, fun, and laughter to it.

In Star Trek: The Next Generation, there’s a race known as the Q Continuum. This race is immortal. Their immortality has led them to live in a constant state of boredom and monotonous stagnation. Knowing that they have all the time in the world has zapped them of their motivation to get anything done in the present.

Seen from that perspective, it’s a good thing that humans don’t live forever. Knowing that one day we will die should push us to act to make the most of our lives, while we still have time. Live your best life by seizing the day. You can get started with the ten exercises above. Carpe diem!