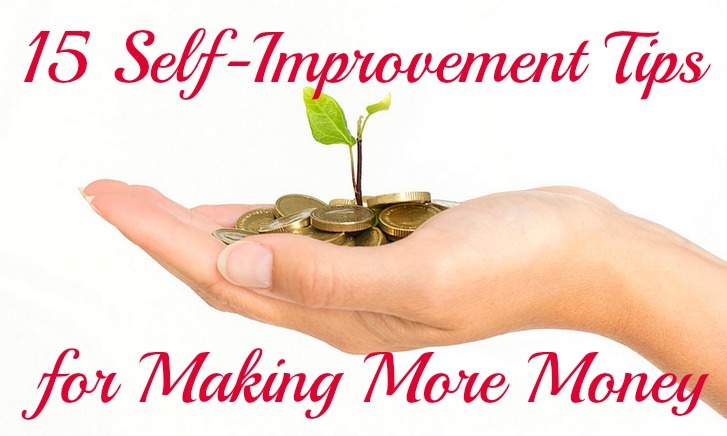 To make more money, you have to become the type of person who makes more money.

There are an endless amount of tactics, strategies, and techniques for making more money. Some of them include freelancing, asking for a raise, turning your hobby into a side-business, promoting other people’s products, writing a book, and creating an app.

So, with so many ways to make money, why don’t people make the amount of money that they want to be making?

People don’t make the amount of money that they want to make not because the opportunities for making more money don’t exist, but because they’re not the type of person who is able to fully appreciate, and take advantage of, those opportunities. That is, because they do things like the following:

To become the type of person who makes more money, you have to work on yourself. Then, when you’re ready to make more money, you will. Below you’ll find 15 self-improvement tips for making more money.

1. Stop Procrastinating. Procrastination can cost you big time when it comes to money. Look at the following:

In order to make more money, you need to stop procrastinating.

2. Increase Your Self-Esteem. There’s a positive correlation between self-esteem and money. That is, the better you feel about yourself, the more money you’re likely to make, and be able to keep. Confident people have all of the following going for them when it comes to making more money:

To increase your net worth, begin by increasing your self-esteem.

3. Change Your Beliefs. As I wrote in my post, 35 Powerful Beliefs About Money: From Trump to the Dalai Lama, in order to make more money you need to create empowering beliefs about wealth. Here are a few negative beliefs about money:

Now, compare those negative beliefs about money with these positive beliefs:

4. Build Your Courage. Making money takes courage. In order to make money you have to put yourself out there, take smart risks, and convince others that what you have to offer is worth their money. That is, you have to be brave.

5. Read More. One of the habits that most wealthy people share is that they read. According to Thomas Corley, author of “Rich Habits: The Daily Success Habits Of Wealthy Individuals,” wealthy people love to read.

In fact, 88 percent of rich people claim that they read for self-improvement–both books on finances and personal development–for 30 minutes or more per day.

6. Stop Being Afraid of Failure. In order to make more money you have to act on your ideas. Your ideas may be right, which means you’ll succeed. But your ideas could also be wrong, which means that you’ll fail. If you’re so scared to fail that you don’t test your ideas, how can you expect to succeed?

If you want to make more money, you have to be willing to fail.

7. Take Responsibility. Lots of people have a long list of excuses of why they’re not making more money. And the excuses usually involve somebody else, or something outside of themselves. Look at the following:

People who  become wealthy believe that they’re in control of their lives, and that making money depends on them and on what they do. If you want make more money, take responsibility for yourself and for your financial situation.

8. Make Yourself Lucky. What does luck have to do with making more money? A lot. Making money is a combination of skill and luck. That’s because there’s randomness involved in everything you do, which means that chance plays a role in how the chips fall.

However, as I explain in my post, “How to Make Yourself Lucky“, there are things you can do to improve your luck. These include the following:

In order to make more money, make yourself lucky.

Learning to manage risk is vitally important if you want to make more money.

10. Learn to Focus. In order to make money you have to stop flip flopping from one thing to another. Choose carefully what you’re going to devote your time and attention to, and then give that project everything you’ve got until it’s done.

Ten half-completed projects won’t make you any money. However, one well-chosen project carried out to completion, will. Learn to focus on one thing.

11. Strengthen Your Self-Discipline. There are at least two ways in which having self-discipline will help you to become wealthy:

Here are some of the reasons why this is so:

Increase your wealth by increasing your happiness.

13. Learn to Manage Your Time. One of the main reasons that people give for not making more money is lack of time. That is, they don’t have the time to look for opportunities, learn new skills, or do the necessary work.

Although there will always be just 24 hours in a day, no matter what you do, you can “find time” for making more money by learning to manage your time. In fact, to make more money, all that you need is just one-hour-a-day.

14. Set Goals. In order to become wealthy you have to set the goal to make more money. Your goal should specify all of the following:

Remember to start off with an amount that’s small enough to be reasonable. Then, move up from there. Here are three examples:

15. Increase Your Motivation. A lot of people set the goal of making more money and get to work on their goal right away. However, if they don’t see results in a short amount of time, they lose their motivation.

If you want to make more money, you have to keep your motivation high until you succeed.

Live your best life by becoming the type of person who makes more money. Start by following the 15 self-improvement tips for making more money explained above.