Are You As Awesome As You Could Be? 13 Ways To Up Your Awesomeness Factor 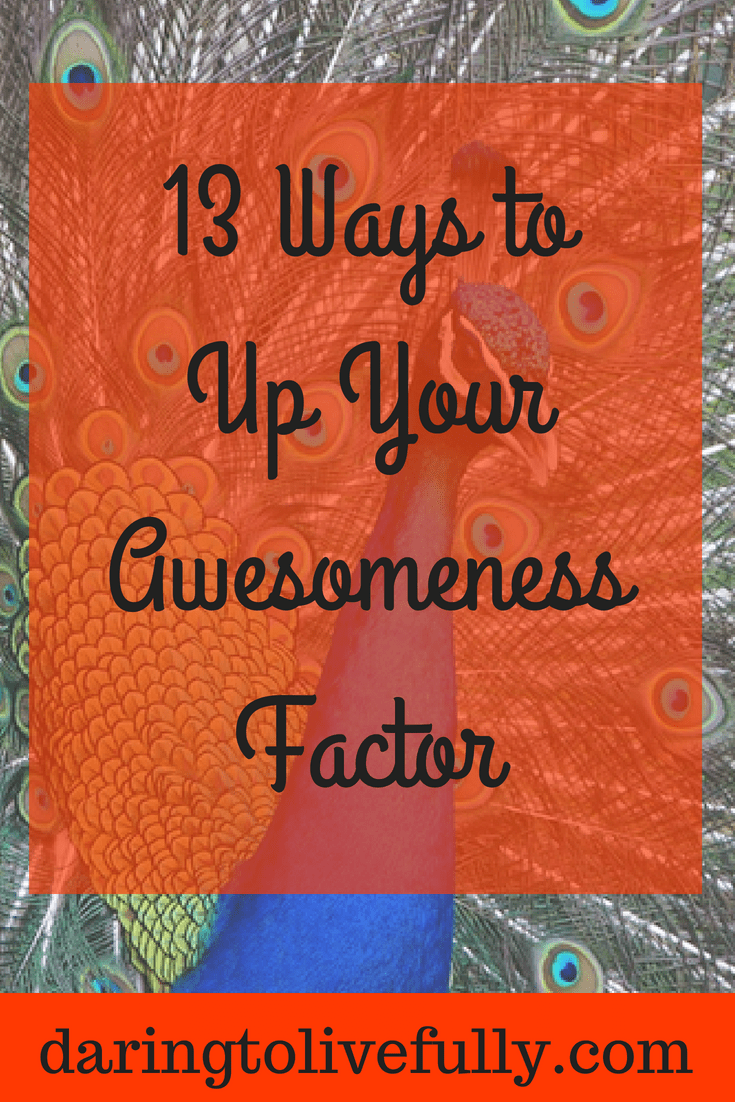 Why settle for good, when you could be awesome?

I’m going to define “awesome” as an adjective used to describe something or someone that’s worthy of respect and admiration. Something awesome makes us stop and take notice, even if it’s just for a moment. It raises our spirits and makes us feel a sense of possibility.

The word awesome can also be understood by thinking of it in relative terms. There’s good, there’s great, and then there’s awesome.

We all know awesome when we see it. Here are some examples:

However, the fourth pizza place was modestly called, “Best Pizza On the Block”. Get it? 🙂

To be awesome you just have to be you, and do your thing, but do it in a way that will push you up the awesomeness scale. How? Below you’ll find 13 things you can do to make yourself more awesome.

There’s a saying that states that you’re as awesome as your goals. Well, no there isn’t. But there should be. After all, in order to be awesome you need to do awesome things.

In fact, I have something to help you get started with this. Subscribe to my free course, The One-Hour Goal Strategy. It will take you from identifying a big, daring, audacious goal, to taking that first awesome step to make it happen.

People with mojo strut their stuff, take healthy risks, and put themselves out there. They feel lucky, which makes them more aware of opportunities and of the good that surrounds them. And that’s awesome.

Here are three ways to increase your mojo:

Mojo will give you the boldness and confidence you need to be awesome. If you want more ways to be awesome by getting a mojo upgrade, visit my post, 24 Surefire Ways to Get Your Mojo Back.

3. Be Awesome – Increase Your Gumption.

Gumption is a close friend of mojo. It’s the friend who keeps getting dealt hard blows, but nonetheless keeps summoning the motivation, positivity, hope, enthusiasm, and courage to get up back up and try again.

Awesome people have gumption in spades. And if they feel their gumption being depleted, they look for ways to refuel it. This includes doing things like the following:

Gumption is the fuel that will take you to 100% awesome.

Everyone has self-doubts. You know that really cool guy who looks like he’s never doubted himself for a minute in his life? Well, he has. In fact, odds are high that he feels some self-doubt on a regular basis.

However, he doesn’t give in to those self-doubts. Instead, he shakes ’em off and gets on with his cool, awesome life. The next time you feel self-doubt creeping up on you, be awesome and tell yourself: “I’ve got this”. Listen to Michael Jackson’s “Bad” if you need to.

Awesome people can do stuff. They can create landing pages for their awesome digital products, cook a gourmet meal from scratch, organize a closet as well as Martha Stewart, and take great photographs. Well, maybe not those skills specifically, but you get the idea.

What awesome skill have you been wanting to learn? Up your awesomeness factor by learning it.

6. Do One Thing Really Well.

Awesome people are really good at what they do, whatever that may be. They don’t just get “good enough” at their craft and then leave it at that. Instead, they practice continous improvement.

In my blog post on 10 Must-Watch TED Talks for Lifelong Learners I mention Eduardo Briceño’s talk in which he indicates that there’s a performance zone–in which you execute your job duties–and a learning zone in which you improve them.

If you want to be awesome, spend some time each week in the learning zone so you can get better at your job and do amazing things when you’re in the performance zone.

As I said above, awesome people have an area of an expertise that they hone in on and become great in. At the same time, they don’t live in a bubble. They also have general knowledge about a lot of other things.

On Saturday I was at the gym and the World Cup soccer match between Russia and Croatia was on the television set. A group of people–including me–were gathered around the TV watching the match. As I watched the Croatians I thought to myself: “Was Croatia part of the former Soviet Union?” I asked a gentleman standing to my right.

He explained to me that Croatia was part of the former Yugoslavia. Then he spoke a little about Tito–the Communist leader who was the Marshal of Yugoslavia from 1943 until his death in 1980–, and of his relationship with the USSR. Stalin tried to assassinate Tito several times and failed. He stopped when Tito sent him a note saying the following:

Stop sending people to kill me. We’ve already captured five of them, one of them with a bomb and another with a rifle. (…) If you don’t stop sending killers, I’ll send one to Moscow, and I won’t have to send a second.

The gentleman added that the six other present day countries which once comprised Yugoslavia are Bosnia-Herzegovina, Kosovo, Slovenia, Serbia, Macedonia, and Montenegro.

I thought it was awesome that he knew all that. And now, because I was curious and I asked–I know too. And because you read this blog, so do you! See, you’re more awesome already.

Be more awesome by learning new things. I recommend the following 8:2 ratio. For every ten books you read, read eight books about your field, and two books about something that’s completely unrelated. That way, you’ll be well-informed in your area of expertise, and also well-rounded.

Awesome people run (or walk fast), they go for bike rides, they play tennis, they golf, they swim, and they’re just generally out there enjoying their bodies and being in nature doing stuff.

To be awesome, get up off the couch and shake your booty. Or at least walk around the block a few times. And do it with attitude.

Passion is awesome. Ideally, you should be passionate about your job/career/ calling. However, you can be passionate about anything: comic books, a certain area of the law, the US Civil War, whales, Shakespere’s sonnets, LEGOs, baseball, flags. . . the possibilities are endless.

One way to bring more passion into your life is with a passion project. A passion project is something you work on–usually outside of your chosen career path–which makes you happy and puts you in the state of flow. Here are some ideas:

Be awesome by adding more passion to your life.

When have you seen someone being rude to someone else–either through action or omission–and you’ve thought to yourself: “That person is really awesome”? I’m going to go out on a limb here and say that the answer to that question is “Never”.

On the other hand, the other day I witnessed a young man go out of his way to patiently help an elderly gentleman climb up the staircase of an elevated pedestrian bridge, walk across the bridge, and then go back down on the other side. I immediately thought: “This guy is just plain awesome”.

If you want to be awesome, be kind to others.

Playful people are fun. They enjoy themselves, and they share that joy with others. And that’s awesome.

In his book, On Being Awesome: A Unified Theory of How Not to Suck, philosopher Nick Riggle defines being awesome as creating social openings. It’s finding ways to express yourself, thereby giving others an opening to express themselves as well. Being this way creates good vibes all around.

One example Riggle gives in his book is from a Celtics baskeball game. The Bon Jovi song “Living On a Prayer” was playing during halftime, and the fan cam was going around projecting people’s faces onto the jumbo screen.

One person stood up and started enacting the role of Bon Jovi in a music video. He roamed around the audience inviting others to join him in the pretense, and many did. Most of the stadium was cheering and clapping. It was awesome.

Being playful is awesome.

12. Hang Out with Other Awesome People.

Then, identify a group of people who are already doing those things and join them. But be cool about it.

I have an eleven year-old nephew who’s naturally awesome. Other kids–and even adults–are drawn to him like moths to a flame. Some people are born under an awesomeness star.

Next post: 60 Lists to Make When You Need a Mood Lift

Previous post: How to Create a Life Balance Sheet and Increase Your Life Net Worth